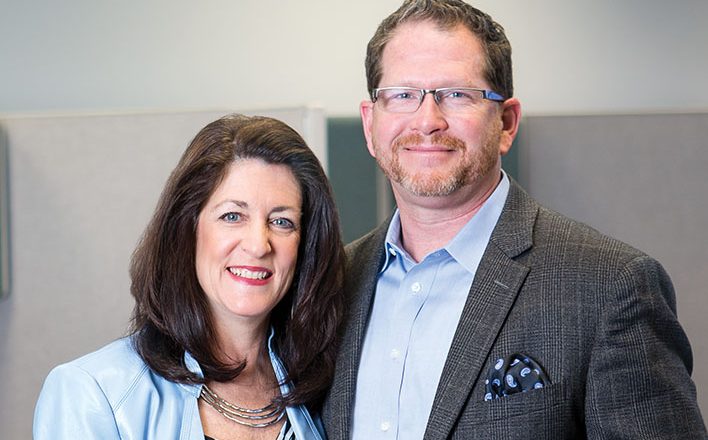 Kevin Staley changed his company—and opened the door to massive growth—by finding a new niche. Here’s how Integrated Health Systems became a national leader in IT for senior care.

Senior care providers want to deliver excellent care for their clients, to keep them healthy and happy. But they didn’t go into business to be technology experts. That’s why so many facilities are instead turning to Kevin Staley and the team at Integrated Health Systems.

Integrated Health Systems helps the senior-living health care clients support and manage their technology and data, and comply with HIPAA rules. That way, health care providers and their caregivers can focus on what is most important: health care and caregiving.

Amazing client satisfaction, lightning-fast response times—“That’s how we’ve built our reputation, which is what gets us additional
opportunities,” Staley said.

Entering the senior market has transformed Integrated. Since it began to focus on this niche, the business has recorded year-over-year high revenue growth.

And Integrated is positioning itself for even bigger things. Earlier this year, the company announced that it received a strategic investment from Traverse Pointe Partners, a Chicago-based investment firm.

The goal is to double or triple Integrated Health Systems within the next three to five years. Considering the increasing demand for senior care—and Integrated’s track record—it’s not an impossible target.

While Staley is excited about the future, he’s also clear about what is fueling Integrated Health Systems’ success.

“We’re not doing anything here that other companies couldn’t do,” Staley said. “The difference is we’re highly focused on how we do it.”

Integrated Health Systems occupies a building southeast of U.S. 69 and 159th Street. Staley relocated his team there in late 2015. It was Integrated’s fourth move in 16 years and gave the company three times as much room as its previous home.

There are still a few empty desks in Integrated’s offices, but not many and probably not for long. The team continues to expand because every week, it seems, another client signs up.

Back in 2001, when Kevin went into business for himself, his first office was his basement.

“We put $1,000 into the bank account and built a wooden bench in the basement, the unfinished basement, and started that way,” he said.

While Kevin was the sole employee, he wasn’t completely alone. His wife, Karen, has been an active part of Integrated’s rise. Though she doesn’t have a formal title, Kevin said, she’s essentially the company’s vice president of HR and leadership development.

The business was called Integrated Systems back then. The “Health” part of the company wasn’t a factor yet. The earliest clients tended to be grocery stores and other retailers.

Kevin’s specialty was setting up voice and computer systems for customers. But he would tackle just about any project they presented him, even if he had to teach himself a new skill.

“When Kevin was starting this, he was willing to be all,” Karen said. “He was willing to do it all for his clients. So, if that meant repairing a photocopier, that’s what he, or somebody on the team, did.”

It wasn’t always easy, but the business hummed along until 2008. Westlake Hardware, Balls Foods (Price Chopper and Hen House), Home Depot, Victoria’s Secret and other major retailers all became clients.

Then, like a lot of companies, Integrated was sent reeling by the economic crisis.

“In ’08, the retail market just tanked, everything tanked,” Kevin said. “And nobody was spending money.”

That forced the Staleys and their team to rethink the business.

“It was obvious we weren’t going to thrive if we didn’t do something different. We would not grow from a small business to an entrepreneurial organization,” Kevin said.

Integrated’s big break came in the form of a Canadian tech company, PointClickCare. The Toronto-based business had developed an electronic health records (EHR) solution for nursing homes and facilities focused on long-term care.

PointClickCare’s software is cloud-based and sold via a subscription model. But its customers still need physical equipment to use it—in many cases, a special computer kiosk.

Unfortunately, most senior care facilities don’t have a deep IT bench. PointClickCare’s clients would order kiosks that could run its software, and in some situations, the facility’s maintenance crew had to install the equipment.

As a result, Kevin said, “they were struggling to get their software into buildings.”

Kevin went to PointClickCare and told them Integrated could help them source kiosks that were more durable and a third of the price their previous vendor charged. His team would give PointClickCare’s clients a quote within two days of receiving the opportunity. They would install the kiosk devices, as well as the wired and wireless infrastructure and electrical, and they would provide education and training for moving to an EHR platform.

PointClickCare loved it because they didn’t have to worry about hardware anymore. Its team could concentrate on what it did best: selling software.

Integrated started receiving a stream of solid sales leads from PointClickCare—anywhere from five to 30 buildings per week.

After 90 days working with PointClickCare, Kevin decided to commit to IT support for senior care. A year later, the company changed names, becoming Integrated Health Systems, and started transitioning most of its existing retail clients to other vendors.

The pivot to the senior market was just the start of Integrated’s evolution, not the end.

The team has gone on to introduce a series of new products and services, such as Pulse, ConnectaCare, MobileForever and CodeRed.

The Pulse solution is a platform that allows Integrated’s team to remotely manage and support clients’ technology, no matter where that client is located. The company can also provide emergency service on-site within two to four hours, throughout the entire country.

Then ConnectaCare was developed. It’s a web-based, hosted desktop solution that is HIPAA compliant. It also performs faster and more efficiently than a Citrix environment, at a lower cost.

Just recently, Integrated unveiled MobileForever, via a partnership with Sprint. Senior care facilities can obtain smartphones and tablets for their entire staff, complete with support from Integrated, in a pay-as-you-go approach, with no up-front device cost.

Workers can then use those mobile devices to gather information and update records “at the point of care”—in patients’ rooms or at their bedside—instead of walking to a kiosk somewhere down the hall.

And that leads to higher productivity, higher employee engagement and, because point-of-care reporting is more accurate, higher reimbursement rates from Medicare and other insurers, Staley said.

Block joined the company last fall, and it was a terrific hire, Kevin said. The partnership has given Staley the freedom to
concentrate on growth.

“My job is to rev the engine as fast as I can on the revenue side,” Kevin said. “His job is to keep the wheels from falling off.”

Partnering with Traverse Pointe Partners will help with this, too. In addition to its financial support, the firm has extensive expertise and a network that will guide Integrated as it grows.

The business isn’t the only thing changing. Staley is stretching himself, too, and mastering a slightly new role. He’s still CEO, but he reports to a board now.

“I’ve got bosses for the first time,” he said, chuckling.

Seeking outside partners was a deliberate, strategic choice he made.

“You get to a point that you outgrow your own ability, and that’s where I saw this company,” he said. “The organization was already outgrowing my abilities, two and a half years ago, my ability to know what to do throughout all aspects of the organization.”

The upside is, he doesn’t have to perform every single job at Integrated anymore, like he did in the early days. He doesn’t have to master each piece of the business or all the solutions that his company offers. He’s got a team to back him up.

He knows his people know what they’re doing, and he trusts them implicitly.

“Walking in this door and seeing this conference room full of people with a whiteboard full of stuff, drawings or diagrams, and I have no idea what they’re doing—that is cool,” he said.

Looking back on the last 16 years, how did Integrated achieve everything it has? In a word, focus.

“You’ve got to figure out the one thing or two things that you’re really good at, and focus
in on it,” Kevin said.

For Integrated, those things are the senior market and client satisfaction.

The importance of keeping customers happy is never far from Staley’s mind. On his desk, he keeps a short stack of laminated “cheat sheets” filled with tips on “15 Ways to Make Customers Smile” and “25 Phrases to Calm Customers.”

Integrated has set up a system for tracking its interactions with clients and uses Net Promoter Scores (NPS) as a guideline. Its NPS score is regularly in the 80s, higher than those for Amazon, Apple and Netflix.

If there’s ever a problem, the team quickly rallies to fix it. Integrated’s culture is “fault agnostic”—it doesn’t matter if a problem originated with another vendor, like an internet provider, a wireless service or a device manufacturer. The No. 1 goal is to get things running smoothly again for the client.

If they can devote themselves to the one or two areas where their business excels, other entrepreneurs may notice their horizons expand, too.