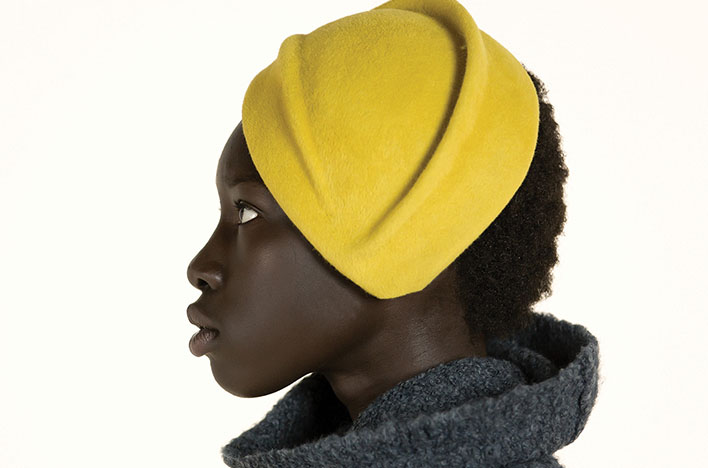 When it comes to fashion, hats have re-emerged as a statement item, allowing women to punctuate their sense of style.

She works out of a studio behind boutique Floc5 & Co. in the Crossroads Arts District. Hood’s designs are sold at Floc5 and through her website, and she is expanding the wholesale end of the business.

Today, Amina Marie Millinery has been featured in numerous fashion magazines, museum exhibits and runway shows around the world.

A graduate of Shawnee Mission East high school who attended art school in San Francisco, Hood has always had a creative streak. She just didn’t know it would take her into millinery.

“I was in drama, and I used to sew costumes in high school, and I was always creative,” Hood said. After a stint at textile school, Hood worked in the retail space as a visual designer for Nieman Marcus and later as a buyer for Halls.

“I have a lot of knowledge of how things work in the (fashion) industry, and that absolutely helped me with this,” she said.

“In the beginning I was making hats for friends. It was a fluke,” she said.

A friend asked Hood to make a hat for her to attend Burning Man, a California art festival in the desert.

Knowing no one locally who made hats, she searched online for “how to make a hat” and found Arizona-based designer Jeanne Bjorn on the internet.

“We did three Skype sessions, and it was really hard, but I managed to make this hat for my friend,” Hood said. “It wasn’t my finest moment in millinery, but it got me excited and started.”

From a fluke to a business

Hood traveled to Colorado to take a weeklong class with Bjorn. “I hadn’t thought about doing it as s business,” she said.

The turning point came after she entered an international millinery competition put on by London’s Lock & Co. Hatters.

“I ended up becoming a finalist, one of nine in the world and the only American,” Hood said. “I went to London hat week, and that’s when I thought, ‘I am good at this, and maybe this should be my profession.’”

With the help of her husband, attorney Matthew Hood, she went into business as she continued to study the art of millinery. One stint took Hood to New York City for 23 days to study with a prestigious Russian milliner. There, Hood learned couture stitches and techniques; the experience was invaluable.

For Amina Marie Couture, “everything is done by me, and it is hand-sewn, dyed by me, and all the material is the finest material, a lot of it coming from France,” Hood said.

All hats in the couture line are custom designs.

“I do a lot of custom designs for people attending the Kentucky Derby, Ascot and Preakness races, for mothers of the bride and weddings overseas.”

Last season, she made 30 hats for the Derby alone. Hats in the couture collection average

$350 to $400 and up depending on materials and labor. “The A.HOOD line is my commercial line that I just launched, and I am hoping to wholesale to national stores and boutiques,” Hood said. “They are more casual. I call it street style—mine are more Parisian street with a feminine edge.”

Hood designs the commercial line, but these hats are stitched by others based in New York. Hat materials include high-end wools and fur felt, and Hood likes to mix in vintage materials she finds. These chapeaux are more accessible, with a price point of $100 to $300.

“I like to make things special, not made on a press in China.”

Hood prides herself on making her designs special, no matter which line a customer chooses.

“When someone finds the right hat, they just beam,” Hood said. “It gives them such confidence. People are so serious here, and it just loosens people up.”

‘You learn to balance’

There have been challenges along the way. She still designs her couture pieces at home. Hood works to balance her millinery work with raising three children – a 14-year old and eight-year-old twins.

“I wouldn’t be able to do any of this without my husband,” Hood said. “It’s always been a little nutty, but you learn to balance. When you are passionate about something, you make it work.”

‘An opportunity to stand out’

These days, Hood is focused on growing the wholesale line, but she has ideas for the future of Amina Marie Millinery.

“I would like to do a kids line for A.HOOD and do more men’s styles for that, as well,” Hood said.

She wants to expand her social media presence and find people locally to sew for her lines. “It’s hard to find people that hand sew.”

While her hats have worldwide appeal, Hood said Kansas City is a great place to do business. “I could have located anywhere, (but) Kansas City really supports small business and helps them,” she said. “You have an opportunity to stand out here. … A lot of people who would have moved to bigger markets have decided to stay here.”