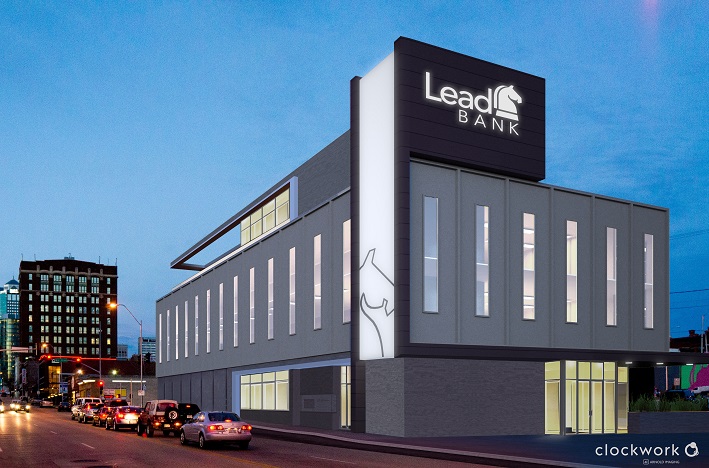 Later this summer, Lead Bank will open the doors of its newest location in the Crossroads Arts District of Kansas City, Mo.

Lead Bank will offer banking services on the ground floor of the building at 18th and Main streets. But office space is also being set aside for four to six startups—the winners of the upcoming LaunchKC grant competition will be invited to set up shop there. Upper floors will be leased out to other businesses, and there will be conference space available, too.

The new location will not only serve as a resource for Lead Bank’s customers and the surrounding community, but also as a statement about what the bank hopes to accomplish, vice chairman Joshua Rowland said.

“We’re a business bank,” Rowland said. “Our strategic expansion plan is to be in the key business districts in the communities that we serve. We want to be in the heart of where people do business.”

Expansion has been a goal ever since the Rowland family acquired Lead Bank. The Garden City, Mo., lender grew to Lee’s Summit in 2008, and if not for the economic crisis, Lead Bank would have added another location before now, Rowland said.

While Lead Bank considered several locations in the urban core, the Crossroads and its high concentration of up-and-coming companies made it the best choice for a new branch.

Plus, the building itself was originally built as a bank, though it was most recently occupied by a cellphone company. While the overall construction is still very solid, getting the space ready for Lead Bank required a complete gutting.

In the industry, there’s been some talk about whether banks really need as many brick-and-mortar locations as they used to, Rowland said. Thanks to online banking, many day-to-day transactions can be completed without ever setting foot in a bank lobby.

While Lead Bank doesn’t really want or need to be on every single street corner, “people need to see their bank and know it exists,” Rowland said.

Rowland’s advice for small businesses thinking about an expansion? Be prepared for the unexpected. Practically every project has at least a few surprises.

Once you’ve done your homework and determined that a new building will benefit your company and your customers, though, be ready to move forward.