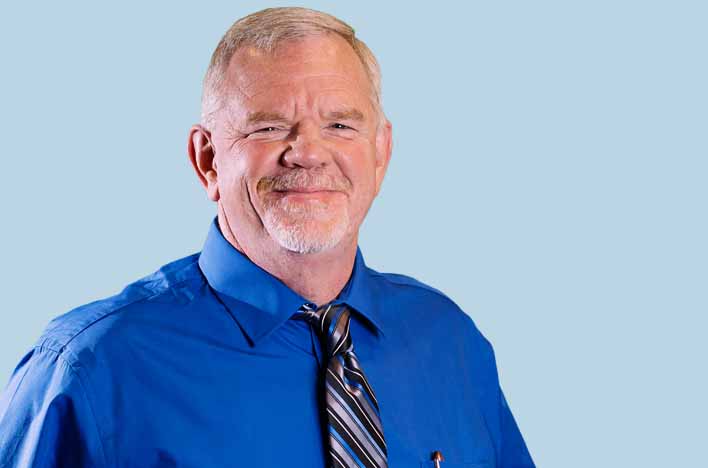 This local business is revved up for expansion, thanks to help from ScaleUP! Kansas City.

Ron Mirick has always tinkered with motorcycles and choppers for fun and work. But it wasn’t until about 10 years ago that his side business—Cass County Choppers—found a niche market converting bikes from two wheels to three.

Mirick’s company sells trike conversion kits for motorcycle owners across the globe. The niche has been boosted by aging baby boomers hoping to keep riding the bikes they love, as well as disabled bikers and many others who don’t want to spend $40,000 or more buying a new trike. Instead, they can convert their own for about $6,000 and up with Mirick’s kit.

Mirick practically stumbled into the market when his dad bought a trike conversion kit for his motorcycle. It wasn’t exactly turnkey. Nothing fit.

“If we didn’t have a machine shop, I don’t know how we would have made it work,” said Mirick, a machinist by training. “We started looking at it and decided we could do better than that.”

That was 2007, and the business near Pleasant Hill has grown exponentially since. Now Mirick is turning to ScaleUP! Kansas City to move to the next level. The free program provides classes, peer mentoring, professional guidance and other services to growth businesses.

Mirick, who runs the company with his wife, Gigi, has been assembling and disassembling machines since he was 13 years old at his dad’s business. He knows the trade inside and out. But he isn’t too proud to learn new skills. When he heard about ScaleUP! classes, he knew it was the help he needed as Cass County Choppers faced a major expansion.

“I’m getting wise enough now to know that I don’t know everything,” he said.

ScaleUP! Kansas City is offered by the University of Missouri-Kansas City Innovation Center and the U.S. Small Business Administration. It’s available to entrepreneurs who have been in business at least two years, generate $150,000 to $500,000 in revenue and are in a market capable of supporting more than $1 million in sales.

“We thought ScaleUP! would help us to redirect and repath some of the things that we were doing to help our business grow,” Mirick said.
From Day One, he started incorporating the ideas he got from ScaleUP! For him, it meant hiring three employees, including an inventory manager. It immediately freed up Mirick.

“The inventory (was) in my head,” he admitted.

The shop manufactures all the parts for the trike kit, so Mirick spent considerable time just packaging the kit, which is specific to each motorcycle model. It killed half a day.

The ScaleUP! presenters reminded Mirick how desperately he needed to streamline operations and focus on growth.

“My time would have been much more well spent on other things for the overall growth of the company,” he said.

He also hired a production manager and a salesman, who started using social media to expand their reach and stay in touch with existing customers. He considers customers family. It’s crucial that customers sense that feeling, too.

‘PROBABLY THE BEST BOSS I’VE EVER HAD’

Most customers receive the conversion kits—which have gone as far as Russia and Australia—by mail and then convert their bikes themselves. However, others trek across the country to let Cass County Choppers complete the full installation.

Mirick said his success hinges largely on those customer connections but also the teamwork of his employees. He considers his staff part of his family.

Riffe said Mirick looks for the best employees for the team and explains how everyone fits into the company’s overall success.

“Ron makes it very clear that what we do in the shop is part of the team,” Riffe said.

“It’s getting really fun,” Riffe said. “I love the work that we do.”

WHAT’S NEXT FOR CASS COUNTY CHOPPERS?

Mirick used to get his accountant’s report and file it away. He gave it little to no thought until a ScaleUP! presenter said,

“You have to actually look at them.” These days Mirick is closely reviewing his financial statements to make adjustments and reach his goals.

It will be helpful especially in the next few years as Cass County Choppers grows.

These days the business employs seven people, not including the Miricks. They nearly doubled their manufacturing capability this summer by adding new machinery and will launch a night shift within a year. It won’t be long, Mirick expects, before they outgrow their space and take the next big leap.