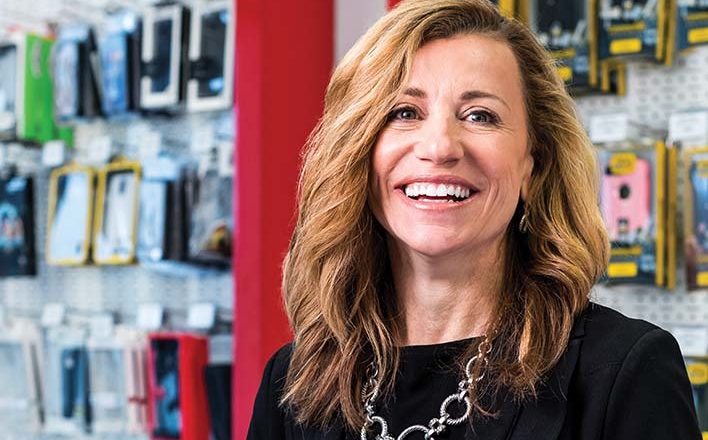 Phone Medic, with CEO Christine Ricci at the helm, is soaring to new heights as it meets explosive demand for technological connectivity.

Launched in 2014, Phone Medic repairs devices such as cellphones, tablets, computers, game consoles and drones. It is plugged in to new technologies such as IoT (Internet of Things), Google Home and drones.

The locally owned company currently operates eight stores in the Kansas City area and Lawrence, and it plans to open three more in the first and second quarters of this year. A 12th store is a possibility for later this year.

“We’ve got opportunities not only to grow locally, but regionally and nationally,” Ricci said. “We’ll keep going after additional opportunities.”

Privately held Phone Medic experienced 109 percent profitability growth in 2016. Employee head count now stands at about 50, up from 40 when Ricci became CEO in 2016. 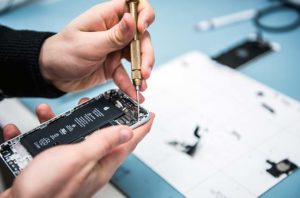 Much of the fuel for Phone Medic’s growth is coming from the business-to-business and educational spheres. Major customers include Lockton Cos., the Independence School District and the Kansas City Chiefs.

Providing service to the Chiefs is a recent touchdown for Phone Medic.

“That’s a very exciting account for us,” Ricci said.

When employees are separated from their technology, it means “lost productivity, down time and slowed-down communication,” Ricci said. “The tolerance for that is minimal. You really can’t have that in this day and age. More and more businesses are looking for a local player to be able to service their needs.”

And those kinds of needs are becoming just as important in the educational sphere, Ricci said. “As education shifts toward each student having their own device and everything is technology- based, it’s critical for the students to stay connected.”

No matter what sphere the customer inhabits, serving that customer requires riding the wave of a rapidly changing industry.

The Path to Inspiration

Ricci grew up in the Chicago area, where she and her five siblings worked to put themselves through private high school. She survived cancer when she was 16.

That experience gave her a passion for health care, which was her first career. Ricci served as a registered nurse in intensive care units, including with burn patients.

After earning an MBA with an emphasis in management information systems, Ricci and her husband moved to the Kansas City area. In 1999, she landed a job with Cerner Corp., where she helped start that company’s consulting division.

At Cerner, she worked directly with the late Neal Patterson, the company’s co-founder and longtime CEO, who was a pioneer in the development of health information technology.

“I gained a lot of learning from him,” Ricci said. “He was the most brilliant visionary I’ve ever met in my life.”

Ricci next worked at Sprint, where she learned the telecommunications industry. Her roles there included business development, product development and product management.

Ricci subsequently was drawn to the world of smaller, more entrepreneurial businesses. Between 2007 and 2016, she worked for B.E. Smith, a health care executive recruiting firm, and ECCO Select, a recruiting and consulting company with an emphasis on information technology. 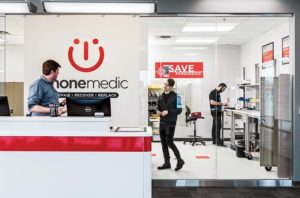 Ricci said her work with B.E. Smith and ECCO Select gave her a passion for helping businesses grow at an accelerated rate. In 2016, that passion led her to accept an offer to become the CEO of Phone Medic, which was founded by brothers Mike and Paul Kushnir in 2014.

“The fascination with me for small businesses is, you have to step in and figure out the fastest, most economical path for high growth and high profitability,” she said. “So it was with Phone Medic. It was a matter of looking at a lot of different business opportunities in Kansas City.”

Ricci likens growing a business to building a house.

“If you go into business and you just start growing and you don’t have a foundation in place, you’re going to implode,” she said. “You can’t just go straight to the top floor—it will cave in. You’re going to have negative customer experiences and high turnover. You’ve got to build out that foundation for it to be strong.”

The foundation Ricci refers to is the right people, processes, systems and tools. And while the foundation must be firm, it also must allow for adjustments to changing conditions.

“As time goes on, technology gets more and more complex and changes at a faster and faster rate,” Ricci said. “That’s part of building out our infrastructure. You’ve got to build an infrastructure for agility. As the business changes, as technology changes, we need to be on the heels of it and be ready to go.”

Similar to what she experienced as a nurse, Ricci said a strong foundation is built on a work culture of selflessness.

Ricci said one of the keys to building a successful work culture is enabling employees to have fun at work.

So how can an employer make a workplace fun for employees?

For example, Ricci said, an employee may aspire to be a manager. “But they may get there and realize, ‘This is no longer fun’ or ‘This is not what I dreamed it would be.’”

If an employee’s aspiration changes, the company should support that and help the employee reach his or her new goal, Ricci said. “We’re a small enough company and a nimble enough business that we can adjust. It’s how they define success, not how I define success.” 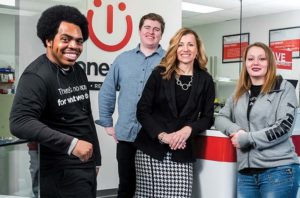 But a fun culture is about more than helping employees reach their desired career milestones, Ricci said.

“We do a lot of celebrating of small successes. A small success may be a store reaching a certain goal that’s been set out for that store. Or companywide, it may be a surprise pizza party Saturday. Pretty much all my employees work on Saturdays.”

Ricci, who worked hard to overcome challenges in her youth, has a passion for giving back. For every repair done, Phone Medic donates money to Big Brothers Big Sisters of Greater Kansas City.

“They have such a major impact on youth and their development, and they give a lot of children a fair shot at life,” Ricci said.

Phone Medic is in the midst of a three-year growth plan that began in 2017. “What we are today will evolve dramatically,” Ricci said.

So what happens when the three years is up?

That high-growth plan includes “a multipronged approach” to reach customers, Ricci said. One new prong is a mail-in repair service that launched in February.

Ricci became an owner of Phone Medic on Jan. 1, but she said that won’t change how she does her job.