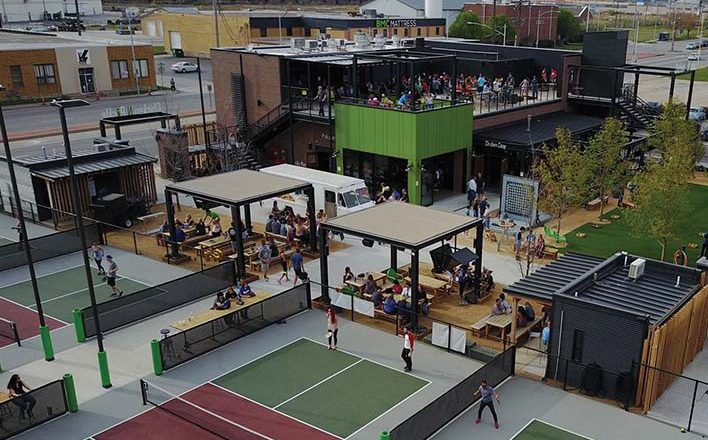 Pickleball is one of the fastest-growing sports in the nation, so it should be no surprise that Chicken N Pickle has expansion plans of its own.

The owners of the North Kansas City hotspot broke ground on their second location in May in Wichita, but the expansion won’t stop there. Kellen Mumm, vice president of business development, said the company could have as many as 10 locations within three years.

“We’re going to ramp up quickly,” he said.

Mumm said Texas is a likely target for a third location, and Austin, Dallas, Houston and San Antonio are on a short list of possibilities along with Denver, Oklahoma City and Omaha. He said the company has no plans to franchise locations in the short term.

Chicken N Pickle combines a casual restaurant and rooftop bar with an indoor/outdoor entertainment complex that features games like cornhole, oversized Battleship and Jenga and, of course, pickleball.

The paddle game has been around since the 1960s, but it has experienced a surge in popularity in recent years. According to the USA Pickleball Association, nearly 3 million Americans play the game at least once a year. Although its growth is due, in part, to its popularity with the older generation, Mumm said Chicken N Pickle has wider appeal.

“The younger crowd want a craft beer and something to do, rather than just sitting around a bar,” he said. “Pickleball is perfect. You can play with your friends and have a beer afterward.”

Mumm said most Chicken N Pickle customers aren’t avid pickleball players, but the business has a good core of regulars who are.

“A lot of people come for lunch or a beer, and they don’t even know we have pickleball until they get here,” he said.

The game, and the venue, are popular enough that Mumm said courts are often reserved more than a week in advance during the weekends.

David Johnson, chairman of Maxus Properties in North Kansas City, came up with the concept for Chicken N Pickle, then brought on Bill Crooks as a partner.

“David had rough idea of what he wanted,” Mumm said. “Bill put method to his madness.”

Crooks has opened restaurants in Wichita before during his long tenure with Overland Park-based PB&J Restaurants Inc.

“He has a lot of experience franchising and building new concepts,” Mumm said. “He’s a huge part of this. He’s a big reason we‘re in Wichita.”

The Wichita location could offer a glimpse of Chicken N Pickle’s future. At 10,000 square feet, the restaurant will be nearly twice the size of the North Kansas City location, allowing it to offer a more diverse menu. The venue also will have 10 pickleball courts, compared with eight in North Kansas City.

“The next iteration will be bigger and better,” Mumm said.