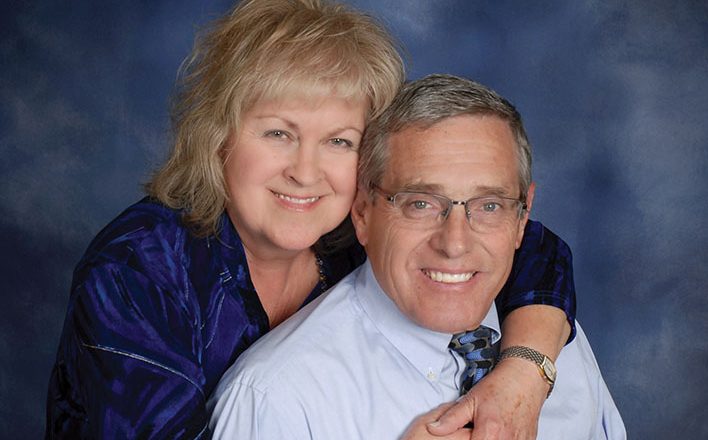 Judy Roetheli urged her husband Joe to clean up their dog Ivan’s bad breath. But she didn’t know it was the beginning of an entrepreneurial journey that would put the couple at the helm of an award-winning company that spanned 60 countries and several continents. Their journey continues today, even after the sale of their company, through the work they do with their foundation.

When Judy asked Joe to do something to freshen their dog’s breath, the family was in the midst of a fresh start too. Joe, an agricultural economist for the US Department of Agriculture, had been asked to relocate to Washington, DC. After a family meeting, Joe declined the offer and resigned.

But the Roethelis noticed that Ivan’s breath was improving after eating Joe’s product. So Joe enlisted the help of a nutritionist and a dentist to refine it. By 1996, the Roetheli’s had founded S&M NuTec in North Kansas City to manufacture Greenies®, the name they gave to the new dog treat.

A Viable Product—With No Funding

The Roethelis knew they had a viable product, but the company struggled to find funding.

“We went to almost every bank in a wide metro area and gave them our proposals,” said Judy. “We felt like they were laughing at us because we were a school teacher and a government worker with no business experience or collateral trying to start a pet business with a green treat,” Judy said.

Joe added: “These kinds of situations require a lot of persistence and passion. Judy would keep a spreadsheet of credit cards and their introductory periods, and she would roll them to a new card when the introductory rate was up.” Joe said he doesn’t recommend that approach for most situations though.

As the company grew, Joe looked for equipment lease financing for an injection molding machine. Everyone told him “no.”

“In the end, I out-persisted them, and we ended up with 17 equipment leases,” he said. “We also had a good relationship with our primary ingredient supplier and they gave us very lenient terms.”

Between the credit cards, equipment leases, a lenient supplier and the cash flow from product sales, the Roethelis were able to bootstrap the business. “We didn’t get our first loan for actual production until we’d done $1 million in product sales the month before.”

Joe and Judy both agree that one of the motivators to keep going was the belief that if they gave up, someone else would pick up the idea and run with it.

Eventually, S&M NuTec grew to 95 employees, launched numerous other products for pets and racked up dozens of awards. The defining moment came in March 2006 when they got a call from Mars saying the corporation was interested in purchasing their company.

When asked to describe that experience, Joe said, “Fast! The short story is that one week after we got the first call from Mars, the two private companies had all the paperwork signed for the transaction.” It took the government about 45 days to approve the acquisition of the eighth largest pet food company by the largest. The Roethelis retained no financial interest in Greenies®.

The sale put the Roethelis in a position to do just about anything they wanted.

Judy said, “We knew we wanted to help people. We could have money, furnish our home elegantly, have vacation homes, but that didn’t interest us. We wanted to help change some lives.”

They used the money from the sale to start the Lil’ Red Foundation, a 501 (c) (3). The funds target third world housing and education, entrepreneurship, inspirational storytelling and pet therapy. In Guyana, for example, their work has contributed to the building of five villages, 325 houses, several schools, improved sanitation facilities, worship and recreational facilities, and a
few microenterprises.

So how can small business owners who desire to give back get started?

“Think seriously about what you want people to say about you at the end of your life,” said Joe. “Then put together some stepping stones to get there. That gives you a decision making tool for your life goals.”