A competition has given a local “doughnut laboratory” a boost.

Andrew Cameron, the owner and founder of Donutology in Westport, recently participated in the NextGen in Franchising Global Competition in Phoenix.

The event was part of a four-day convention for business owners who are considering franchising or beginning the process, Cameron said. He submitted a video application last fall and was one of 20 finalists selected from about 900 applicants. 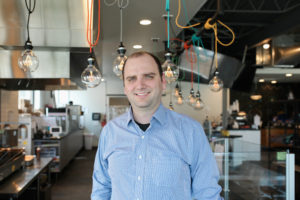 The selected 20 companies went through a franchise accelerator program that included sessions with large franchisors, mentoring and fellowship with other entrepreneurs, Cameron said. Donutology was one of three participants selected to pitch a business plan.

Donutology, which Cameron describes as an interactive doughnut experience, is a strong candidate for franchising, the owner said. It’s about a $2 billion industry and steadily growing.

“Doughnuts are bigger than ever right now,” Cameron said.

Donutology has “unique and fun qualities that make us have a strong potential for franchising,” Cameron said. That includes unique products like doughnut ice cream cones, gluten-free options and even a doughnut clothing line with local apparel company Charlie Hustle.

Business concept pitches were judged by all attendees of the convention, Cameron said. In the end, he lost to the first-place winner by only one vote. He earned $5,000 for his second-place finish.

Cameron said he planned to use that funding to explore a franchising strategy and develop the road map. He’s already received offers to open additional stores outside of Kansas City, he said.

But before franchising, Cameron said an important next step is to develop proof of concept. He plans to do that by opening a second location in Kansas City.

He’s been looking for months, he said, but he’s still searching for the right building in the right location. The current shop at 1009 Westport Road, Kansas City, Mo., is in a rehabbed Art Deco building that formerly housed Tower Cleaners dry cleaning. The new building will have to be true to the Donoutlogy brand, Cameron said.

“We have a very specific area and type of structure that we want,” he said. “We’re not going to settle for an average location.”