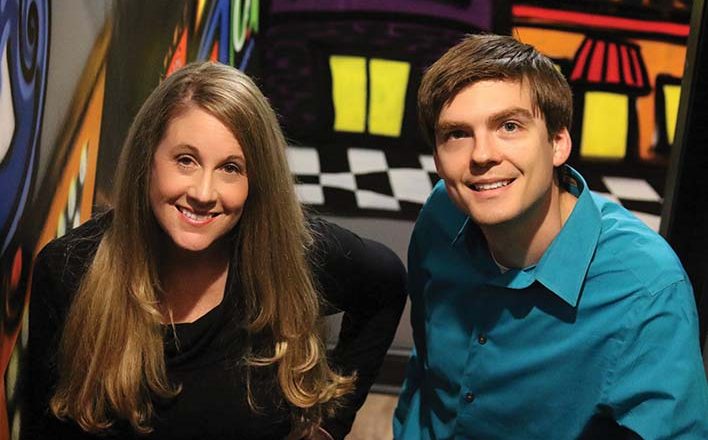 Laura Steward was in that all-too-familiar-to-other-entrepreneurs moment—that do-or-die time when you don’t know what’s coming next, but you keep moving forward.

She was presenting in Omaha, Neb., at the Inside/Outside Innovation Summit last fall, not really sure of where her business, VideoFizz, was going.

Steward founded VideoFizz in early 2015 as a phone app that collates videos from one or 100+ people into one file that can be sent as a video greeting.

Originally, Steward built the app to help people create group video greetings for birthdays or anniversaries or other goodwill greetings. And, at first, it did. Families, business groups and friend groups from around the world all used the app.

But the problem quickly became obvious: “Our customer acquisition cost was $39,” Steward said.

Steward heard from a lot of people who wanted to partner with VideoFizz, but 18 months in, nothing had come of the partnership interest.

So, in Omaha, when she was approached by a company that wanted to pay her to white label the app for their own business, she had a lightbulb moment.

“I thought, ‘They paid us actual money,’” Steward said. “’Maybe other businesses will.’”

About the same time, Steward noticed that some customers were using the app in a way she hadn’t intended. Real estate agents were using the app to create video listings. That alone wasn’t a game-changer—but then Steward had a conversation with Dan Duffy, the CEO of United Real Estate. The two had known each other as swim parents for years but had never talked business.

Duffy’s company is home to more than 8,000 real estate agents nationwide. He liked the idea of the app and of making it work for the agents.

Duffy didn’t say “yes” while poolside. He researched Steward and VideoFizz, and quickly discovered that Steward didn’t do anything “without her game face on. She’s got her act and her vision together.”

From November of last year until its recent launch, VideoFizz has been working with United and other real estate companies. It took minor changes to develop the app to meet their needs. Now, agents can use the video stitching and editing to easily create branded video listings, complete with their logos, property address and watermarking.

After a demonstration at the VideoFizz offices, Duffy was ready to sign on.

He thinks the app will be game-changing in several ways. First, he said, today’s videos are primarily loaded to You Tube, where agents can’t control the ads running before the video (which could be a competitor) or the video after (could be someone playing with a yo-yo). Using VideoFizz allows agents to curate a message to their audience.

“You have worked so hard to get someone to your site,” he said. “You don’t want them to be sent to YouTube, where you can easily lose them.”

Duff also said the app is “super simple to use.”

“You can leave a client’s home and have the pictures and video ready to go before you get to the driveway,” he said.

Steward has employed a couple of key strategies, she said, in launching this new line of business.

“First was making sure the product is solid,” she said. “This was instigated by consumers. We didn’t just do this because we thought it would be cool.”

Secondly, she stayed lean in ramping up.

“That’s really where the path to revenue is,” Steward said.

But now, Steward is gearing up in a big way. Two years ago, she hired a chief technology officer, Eric Goeken, something she wishes she’d done earlier.

“I’m not qualified to be doing that job,” she said. “It cost us a lot of money to not have done it earlier.”

Her team also will expand in the next few months as additional businesses, school districts and more real estate companies are coming on board.

Steward’s strategy to ensure the future of VideoFizz has three parts: “First is keeping up with the volume. Second is focusing on the stability of the product, and, thirdly, to continue adding partnerships.”

As for Duffy, he can’t wait to see what happens next for Steward.

“It’s great to think about one of the fastest-growing real estate businesses in the country and this boutique tech company in Kansas City, in tandem, changing the real estate world,” he said.