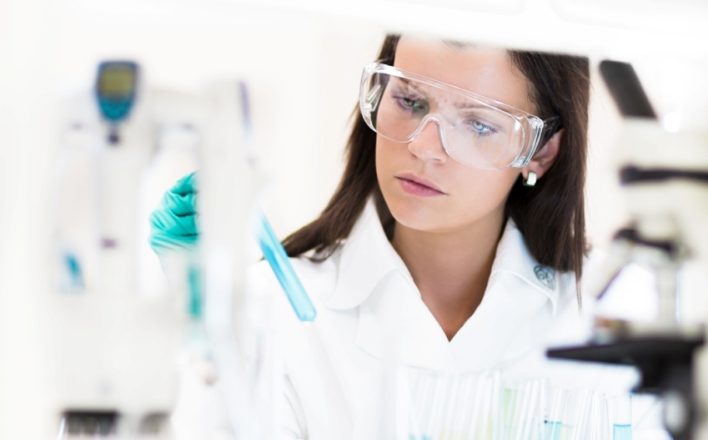 Diana Hess wanted to be a veterinarian.

“For the longest time, up until I was 16, I was determined to go to vet school,” Hess said. “But the teachers that I had and the schools that I went to never really encouraged me to embrace math and science.”

Today, at 24, Hess is the COO of Enduralock, a company she co-founded with her neurosurgeon father. It provides vibration-resistant fasteners to the medical industry with potential applications in the aerospace, construction and automotive sectors.

Yet she wonders what might have been if a mentor had encouraged her to take classes in science, technology, engineering and mathematics (STEM).

“If I’d had just a fabulous chemistry teacher or a biology teacher who I’d really formed a bond with and mentored me, it could have changed the entire direction of my life,” Hess said.

While she eventually found her way to STEM entrepreneurship, many women don’t.

A 2012 study released by the Girl Scouts
of the USA, “Generation STEM: What Girls Say about Science, Technology, Engineering and Math,” revealed the problem begins early:

“We know that STEM jobs are good jobs, they’re high-growth jobs and they’re not gender-specific jobs,” said Laura Loyacono, director
of KC STEM Alliance. “There’s simply not a good reason—there’s certainly not an excuse—for having so few women in that sector of
the economy. We need more STEM workers, and we cannot afford to have 50 percent of the population not fully participate.”

A Need for Networks and Role Models

So what’s the solution?

In its report, the SBA’s Office of Advocacy suggested a handful of possible fixes, such as increasing funding for women in STEM Ph.D. programs. It also encouraged further research on how the demands of parenting might be keeping more women from pursuing patents and STEM ventures.

The report’s authors strongly recommended increasing the number of women mentors and faculty members in STEM programs, as research has shown that women students are more likely to enroll in programs with a higher share of female staff.

“But I don’t see that we’re actually increasing the numbers of women who are staying in their STEM career longer than five or
10 years,” she noted.

According to Million Women Mentors, which nationally monitors women in STEM fields, women make up just 24 percent of the STEM workforce, and 50 percent of women in STEM careers drop out in the first 10 years.

“I don’t know if there is one set reason,” Streeter-Schaefer said. “Women leave in order to have families. And with the lack of role models in STEM companies, women don’t see someone like them making it to the next level. They think it can’t be done, so they take themselves out of the game.”

Central Exchange is trying to support women in STEM fields by helping them make connections with each other—to show them they’re not alone.

“We want to help women excel in their STEM career goals by giving them a place to have their voices heard and make connections with like-minded people through our networking events, STEM speaker series and annual gala,” Streeter-Schaefer said. “And, hopefully, over time we’ll see the numbers change.”

“Whenever you go outside the norm, there’s a risk involved,” Spragins said. “So you have to feel comfortable taking that risk. And if people have a role model, they’re less likely to think, ‘Well, gee, I don’t feel comfortable here. I’ll do something that’s safer.’”

The underrepresentation of women in STEM fields and girls’ uncertainty about STEM careers are no surprise to Kelley Cramm, an associate at Henderson Engineers in Kansas City. In 1997, after working for two engineering firms, Cramm founded Integrated Design Engineering Associates (IDEA), which specialized in designing building systems. In 2007, she sold the company to her current employer.

“The deck is stacked in many, many ways” against women in STEM, Cramm said, from lingering gender stereotypes that discourage
females from entering STEM fields to the dearth of female STEM
role models.

But as a woman who has served on numerous STEM and Women in Engineering committees over her more than 30-year engineering career, Cramm is convinced that more females could be placed in the STEM pipeline if they were recruited more shrewdly starting in elementary school.

“What young women want in their career is to make a difference,” Cramm said. “They don’t see engineering as that, when in fact it really is—big time. But we don’t sell it to students that way. We sell it as, ‘You’re good in math and science? You should be an engineer.’

“When I had my business, what I always said was, ‘Give me someone who is a good C student in math, but can speak and write and think critically and is creative. That is the person who I want to be an engineer in my company.’ People who are creative make better engineers, because they can come up with multiple solutions to a problem, and you have to be able to communicate it to a client or the world at large, or it isn’t any good.”

When Cramm speaks to classrooms about engineering, “I definitely try to slant the conversation to show girls how fun it can be and why I love it,” she said. That includes talking about how, as an entrepreneur, she reused hot water at Kansas City’s City Hall to create a snow-melting system beneath an entry sidewalk. The system especially benefited people in wheelchairs and those who had difficulty walking.

“That’s the kind of story that girls can look at and go, ‘That’s pretty cool, you did a really good thing there,’” Cramm said. “For girls, it’s about helping others.”

Wave of the Future

Local groups are using fun, hands-on activities to show girls that they not only belong, but can be difference-makers in STEM careers.

“Whenever we can, we are finding women mentors, particularly young women who have gone into STEM, to talk about it and to show girls what their career options are,” said Loyacono of the KC STEM Alliance. “And it’s important that boys also see women in these roles. Girls and boys both need to see the diversity.”

KC STEM Alliance supports the implementation in local schools of the FIRST Robotics program and Project Lead the Way, a national curriculum in engineering, biomedical sciences and computer science. And it offers STEM workshops and summer camps exclusively for girls.

“All of the companies that we work with in these events make sure that there are females in front of the girls, showing off what they do in their careers,” said Kate Hood, senior STEM program manager for Girl Scouts in 47 counties in Kansas and Missouri.

“There was one woman at Garmin who plays on a kickball team. And the girls thought that was so cool that they could grow up and play kickball and be an engineer. It’s so exciting for the girls to see a role model.”

Diana Hess of Enduralock is heartened to know that girls are being helped to make their STEM dreams come true.

“I feel like I was part of the last generation to not get that encouragement,” Hess said. “Most of the opportunities now to make a good a salary and have successful careers are kind of shifting into STEM fields.