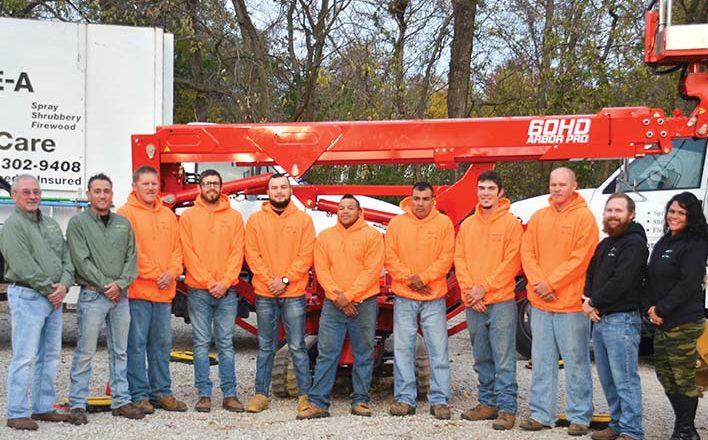 Phil Giordano has grown his business despite some knotty situations

We all know that Mother Nature works in mysterious ways. Nobody knows that more than Felici “Phil” Giordano, owner of Grade-A Tree Care.

Working full-time as a tree trimmer for the International Brotherhood of Electrical Workers, Giordano had picked up extra jobs and customers off and on for a few years, but a winter storm in the early 1980s catapulted his business into high gear.

Before the storm, Giordano had been picking up customers for his business No Worry Tree Trimming primarily through word of mouth and a small ad in the now-defunct Wednesday Magazine.

But the storm prompted weeks of cleanup from every tree trimming company in the area, and Giordano ended up buying a new truck and chipper after that to keep up with the damage removal.

The surprise snowstorm of October 1996, where trees full of fall foliage were covered with ice and came crashing down throughout the metropolitan area, sealed the deal for him as a business owner, but he stuck with his IBEW job a bit longer for the benefits.

Soon he was making more money on the weekends than during the week. When he didn’t get a desired promotion, he decided the time was right to quit his day job and concentrate on his own enterprise.

“I figured if I was going to have to go back to tree trimming, I would do it for myself,” he said.

He later merged with another trimmer using the name Grade-A Tree Care. When Giordano bought his partner out in the early 1990s, he kept the name, incorporating his old name into the tagline: “There’s ‘No Worry’ with Grade-A!”

Just as Giordano was really taking off in business, things became bumpy in his personal life. Giordano’s youngest son, Nick, was born with cystic fibrosis.

To care for Nick, Giordano gave up working on the weekends. He knew it was time well-earned after years building the business.

“I really bonded to Nick, so much so that he grew into my business partner,” he said.

As Nick grew and took on more responsibility, Giordano decided it was time to move the business out of his house and into an independent office. Since then, it’s been full-steam ahead as an entrepreneur—including buying out a competitor a few years ago.

When Nick started losing lung capacity a few years ago and was put on a transplant list, Giordano spent more than 14 months waiting for the phone call that finally came, giving Nick a double lung transplant. Today, Nick is thriving, working for his father and preparing to take over someday.

Giordano is working on a succession plan but isn’t ready to stop running his business just yet. With 10 employees and needing more, he is still in a growth mode.

His advice to budding entrepreneurs is pretty simple: Say what you are going to do and then do what you say. People are looking for people with character.

That’s important to him in business partners as well, after enduring a bad time with a bank that made his financial situation overly complicated and then overly precarious. He finally hired the right CPA and the right bank to get it all figured out and back on track.

“Do your due diligence,” he said. “Don’t assume the people working for you are doing the right thing.”

Still, he has loved being a business owner.

“It’s been fun and exciting,” he said. “We’ve been blessed to play the game. I feel a great sense of debt to everyone who has been with us throughout.”