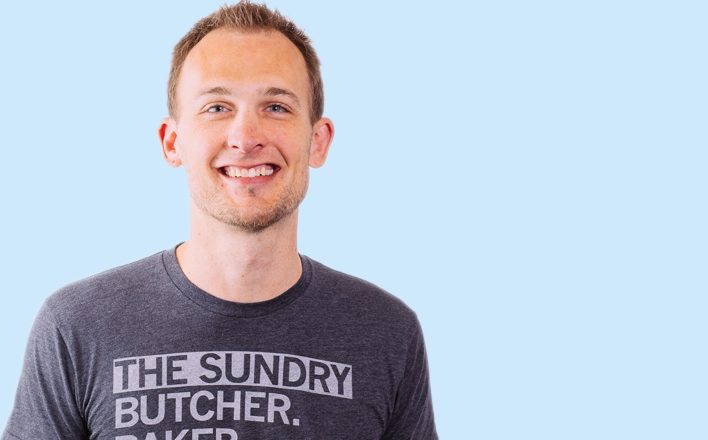 Putting a Modern Twist on the Traditional Local Grocery

When Ryan Wing opened The Sundry in the heart of The Crossroads in 2014, he knew the business would need to adapt to customer demands.

His vision was to open a grocery, deli, restaurant and specialty food shop that harkened back to another era when the neighborhood grocery was a full-service shop with local products and sustainable food. A place where customers could expect consistent quality and friendly service.

After opening the initial store, Wing’s long-term goal was to replicate The Sundry and reach more consumers in an effort to change an industry and to improve people’s lives. But to get there, he needed more storefronts, a growth plan and resources.

ScaleUP! is a program of the University of Missouri-Kansas City Innovation Center and the U.S. Small Business Administration. It’s open to entrepreneurs who have been in business at least two years, generate $150,000 to $500,000 in annual revenue and are in a market capable of supporting more than $1 million in sales.

The timing was ideal for The Sundry to enter the program. Wing already knew he wanted to make changes at the business. ScaleUP! classes gave Wing a rare chance to take a step back and think about what to focus on and what to give up. ScaleUP! experts pointed out to Wing how critical it is for small business owners to review and think deeply about their long-term goals so they can adjust their strategy.

Wing originally envisioned The Sundry as a market that carried all the grocery staples. The store also featured a long community table for customers who wanted to eat from the in-house kitchen. But Wing already knew his initial plan needed refinement. He had to add more tables when more customers started showing up for the kitchen.

Wing also took advantage of ScaleUp! experts to help him with determing the store’s identity. In particular, Wing wrestled with whether the business would truly be a grocery if he decided not to carry  national brand staple products, especially since he had always envisioned the business as being more than a restaurant. ScaleUP! experts helped him with the decision to define the business as a craft food company and how to communicate that to customers.

“Most people were coming to us for things like meat, cheese and bread,” he said.

Wing also knew customers loved the specialty items available at The Sundry such as foods from KC Canning Co., the craft foods industry and local makers, including items from The Sundry’s own kitchen.

Wing said ScaleUP! helped him to zero in on the things that offer the most value to consumers and that allow The Sundry to achieve its long-term goals.

“It actually has been very freeing to make these decisions and to have a sense of clarity,” he said.

Although he has cut back on “staples,” some have praised Wing’s efforts to offer sustainable, local products to consumers.

“Of course you can stock your pantry at home, but you also learn so much about geography of the region. You learn what’s growing in Manhattan, Lawrence and Wichita,” said Alicia Ellingsworth, KC Healthy Kids farm-to-institution manager.

Ellingsworth has worked with Wing for years and knows he has the skill, drive and personality to make the business thrive.

Wing has already launched several efforts that should come to fruition by the end of the year. The Sundry will undergo construction changes this winter to better accommodate the additional tables. And work is underway on a plan to bottle and sell The Sundry’s cane sugar sodas to other retailers. Wing knows they have created something special with customer favorites like basil mint ginger ale.

“The goal is to sell beyond the physical walls of The Sundry,” Wing said.

“Our goal is to have two or three in Kansas City, and should we be fortunate enough to get to that point, then we would try to make the leap to other cities as well,” he said.

ScaleUP! helped Wing focus on his expansion plans even as he makes short-term changes at the original location. The ScaleUP! experts also helped him to see that he will need to change his marketing focus as the company grows. To date, Wing has relied on social and earned media to tell the company’s story and raise awareness. As The Sundry expands, he knows he will
need to broaden those efforts.

“There are different stages in business as we grow. We can’t keep the same strategy the whole time,” he said.

Wing also relished the chance that ScaleUP! provided to talk with other entrepreneurs about their experiences and business challenges. “One thing that is not well understood in the general public, I think, is that starting a company can be a really lonely thing at times,” he said. “And it can feel like you’re on an island.”

He expects the relationships he formed at ScaleUP! to continue for the long-term.