How to Use Customer Research to Innovate

“If I would have asked people what they wanted, they would have said faster horses.”

Henry Ford’s famous quote is one of our greatest lessons in innovation. (Although there is much doubt he ever said this, let’s not let that spoil our fun.)

Steve Jobs said, “It’s really hard to design products by focus groups. A lot of times, people don’t know what they want until you show it to them.”

I think both Henry and Steve were right. What they aren’t telling you is what you are supposed to do about it.

Why Ford and Jobs Are Right

It is not your customer’s responsibility to innovate for you. Innovation is the job of leadership.

Ford and Jobs are right because the mind naturally innovates based on things it already understands. The brain is surprisingly lazy and would much prefer to find the easiest answer possible so it can move on. Famed behavioral economist Daniel Kahneman said in his acceptance speech when he won the Nobel Prize in 2002, “Humans are to thinking as cats are to swimming. We can do it when we have to, but we’d much prefer not to.”

So, if you ask a customer or potential customer to solve your problem for you, the brain’s most likely course of action is to take the easy way out and naturally gravitate to something it already understands. Hence, the faster horse.

Often, when we review other organizations’ qualitative interviews and quantitative surveys, we see questions that are called “Ambiguous Open-Ended Questions.” These are the kinds of questions Ford and Jobs were likely referring to. The results of these questions provide, at best, drab and incremental ideas.

An Ambiguous Open-Ended Question typically sounds like “What things should we change to our product to make it better?” or “What kinds of features are we missing?” or “What can we do to ensure you are completely satisfied?”

With these types of ambiguous questions, you are either asking someone’s brain to solve a negative or work extremely hard, which it is typically unwilling to do. Not surprisingly, the most frequent answer to an Ambiguous Open-Ended Question is … “nothing.” The human brain, hard at work.

The lack of insight that results from trying to customer research your way to innovation provides a unique challenge to leadership because the risk and waste of innovation, pivoting and new product development can be a company killer if you aren’t successful. The model of “build and test” is costly from a capital and time perspective not to mention opportunity costs. So then how are you to confidently and responsibly innovate without jeopardizing the health of your organization? There is a better way. 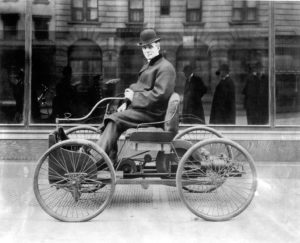 The answer lies in testing ideas that are easy for the brain to understand and don’t rely on your customers trying to innovate for you. The following are four elements of customer research that will make innovation easier and more reliable. For fun we will use some examples that Henry Ford could have used for his first vehicle, the 1896 Ford Quadricycle Runabout:

1. Give context of the idea in terms they already understand.

The brain is lazy. Don’t make it work if you can help it.

This is where Steve Jobs’ point about people not knowing what they want until they see it hits home. The mind works in contexts of things it already understands.

In Ford’s case, if he had performed research, he would have found it extremely challenging to explain his motorized vehicle to someone who had no context on anything other than a horse and carriage. He would have needed to test characteristics of his motorized vehicle in the context people would’ve already understood. So, using a horse and carriage as priming points in the brain would allow it to work with less effort, something it is already looking to do. These concepts might look like:

2. Test the reaction to the idea, not the features.

Features are logic-based elements that don’t physiologically participate in decision making, so using logic-based concepts in your testing or in your messaging will most likely mathematically decrease your probability of connecting with someone or making a sale.

Traditionally, an organization will develop a product or service, take it to market or test it with a sample, and then perform customer research on features and benefits for retooling. This process can be valuable when it comes to engineering a product, but what is the point if we don’t know if anyone will buy it?

Instead, leave the feature and benefit testing to the product development people and pay attention to how the idea benefits the end-user. Instead of Ford testing features like headlamps, how many miles it can get on a tank of gasoline or the high (20 miles per hour) and low (10 miles per hour) speeds, test these ideas instead:

3. Test an extreme version of the idea.

We always recommend testing ideas that are an extreme version of what the anticipated reality of the product or service is. The reason is because testing an incremental idea won’t get you good data. You need to stretch your logistical comfort zone a bit to better understand what a customer wants.

For example, if current status quo is that most players in your industry can process and deliver an order in eight days, and you are trying to find out if faster delivery is an important concept, don’t test six days, test two days. This will likely give your warehouse and logistics people a heart attack, but the point is to discern if this is something you should invest in. If two days is important so is six days and investing in warehousing and logistics is a smart business move. Testing extreme ideas is also a good way to build a true north in your organization. If two-day delivery is your unified goal then your organization can get there even if it seems impossible today. Amazon did it.

This ideation process can be very painful for some deductive thinkers, but, remember, you aren’t promising anything, you are just testing. If you are Ford, you should test ideas you haven’t engineered yet but are part of your vision. These ideas might be:

Never be injured while traveling again. Gives me the freedom to travel from city to city easily. Provides reliable transportation that anyone can afford.

If you are measuring behavior instead of emotion, you aren’t really learning anything about your customers.

This element is the x-factor for solving this paradox. Measuring emotion is something we have been obsessing over for almost a decade and have created a highly reliable method we use every day when doing research for clients.

Measuring emotion is harder than it sounds. We had to create a system that could digitally mimic the brain’s natural decision-making processes through surveys. We measure actions in milliseconds so we can identify when people change their minds (Johns Hopkins says typically within 200 milliseconds) or when the logic brain has been engaged and the emotional output score needs to be decreased. We had to create a new way to use Likert scales and combined elements of Cluster Analysis, MaxDiff and Conjoint to create a unique way to apply one single emotional number to an idea.

When you combine these elements along with the ability to apply a number to an emotion, what we have is a reliable, oftentimes foolproof, methodology that ensures we aren’t forcing our customers to innovate for us. This method uses the brain’s natural processes to our advantage, tells us which types of features we should be developing, and guides us in how to communicate and create demand for our new product or service.

So, if we get the numbers back from our new customer research method, we could have told Henry to make sure the headlamps are bright because people want to travel at night and that he needs to figure out ways to install safety mechanisms on his Quadricycle.

When he was ready to build a marketing and advertising campaign, all we would need to do is look at the numbers. If the top concepts were “A horse that isn’t affected by inclement weather” and “A carriage that has a smooth ride,” Ford’s messaging could be “Travel in any weather and never deal with uncomfortable carriages and saddle sores again!”

Think about how your organization is innovating today. Are trying to get your customers to innovate for you? Are you making the brain work too hard? Are you wasting time and capital? Try using some of the methods included here and take a leap forward.

Grant Gooding is an emotional-data thought leader; speaker; and marketing and neuroscience nerd. He is founder and CEO of PROOF Positioning, a market research firm that specializes in emotional data.