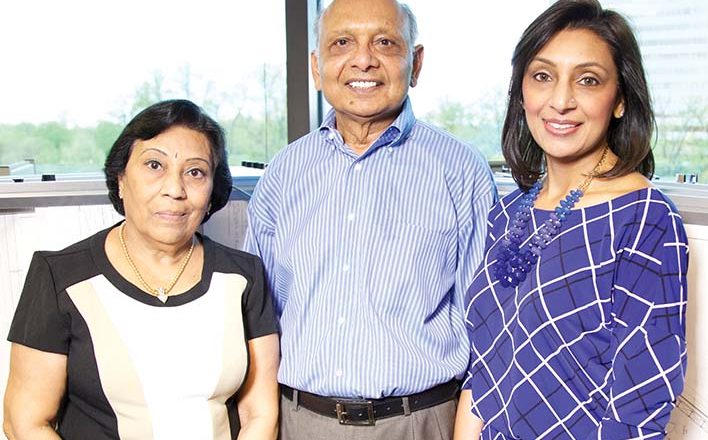 Once the opportunity to join her father’s firm presented itself to Sonia Garapaty, other pieces fell into place, pointing her in that direction.

“It’s almost like fate wanted it to happen because it put everything in line to make this venture successful,” she said.

Today, Garapaty is CEO of FSC Inc., an engineering and consulting firm her father founded in 1979. Before 2005, the idea of being in that position wasn’t really on her radar.

How She Got There

Garapaty studied engineering, specializing in telecom. In the early 1990s, when she began her career, mobile technology was in its infancy.

“If I was going to do something like engineering, then let me do something that was kind of exciting,” she said, laughing.

She started her career in Dallas at Nortel Networks, a huge company and leader in telecom at the time. Garapaty worked her way up to a position in wireless standards—she collaborated with colleagues and clients to help write the standards on how cellphones work with the networks. She also wrote multiple patents.

The job was fascinating, she said. By the early 2000s, she was a manager earning a six-figure salary and traveling worldwide one week every month.

But after her children were born in 2003 and 2004, she was starting to consider doing things differently.

When she traveled, almost every flight would include stopovers in Kansas City—to drop off her son with her mother and pick him up on the way home.

“For me, I was feeling like I was missing so much of my kids, my babies growing up,” she said.

Around that time, her parents came to visit in 2005. She noticed that her father looked tired.

Her dad told her, “I’m ready to sell the company if you don’t come. … What’s the purpose of us continuing in this business, and it’s so stressful, if we’re not doing it for anybody?”

That started a series of conversation with her husband and her dad about what it might look like for her to join the family business. In March 2005, Garapaty committed to a one-year trial at FSC.

Garapaty planned to commute to Kansas City from Dallas each week. But around that time, her husband’s company was looking for volunteers to move to Kansas City for one year to help start a new office. The family moved in June 2005.

“A year later, if we decided we wanted to go back to Dallas, then we could have gone back,” she said. “But we decided to stay.”

It took time for Garapaty and her father, Hasu Doshi, to get on the same page about her new role. The first few months were hard, she said.

Her title was vice president, but Doshi wanted her to start as a design engineer and work her way up so she could learn the business like he did. She wasn’t crazy about that plan, she said.

She found a mentor, Harold Sallee, in the company who helped Garapaty and Doshi bridge the gap in their expectations. Sallee told Doshi that the firm needed Garapaty to be a leader.

“After eight months I knew that this was it, I was not going back to my previous career—this is what I wanted to do,” she said.

It wasn’t just the job that sold her. Living in Kansas City meant that her kids would grow up with their grandparents nearby. Garapaty said she didn’t know her grandparents very well, who lived in India.

“When I came here, I took a huge pay cut—at the end of the day, it didn’t matter. I was here with my family,” she said. “Family is huge for me.”

All in the Family

Garapaty’s father and mother, Subhi Doshi, the firm’s CFO, who once were ready to sell the business, are refreshed now, Garapaty said.

Hasu, the firm’s president, still works as hard as he has always worked, Garapaty said.

“He says work is more enjoyable now because he does only what he likes to do, and I am here to take card of everything else.”

Garapaty and her parents have lunch together every day in Hasu’s office. They talk about everything from finance to family, she said.

“That was my on-the-job MBA training,” she said. “People know when the door is closed and we’re eating lunch together, that’s our time.”

With FSC approaching the milestone of its 40th year in business and having earned an estimated $4.3 million in revenue in 2017, it’s clear that Garapaty and her parents have found their groove working together.

“I’m not letting them go anywhere, as long as they want to still come to the office and still be involved,” she said.