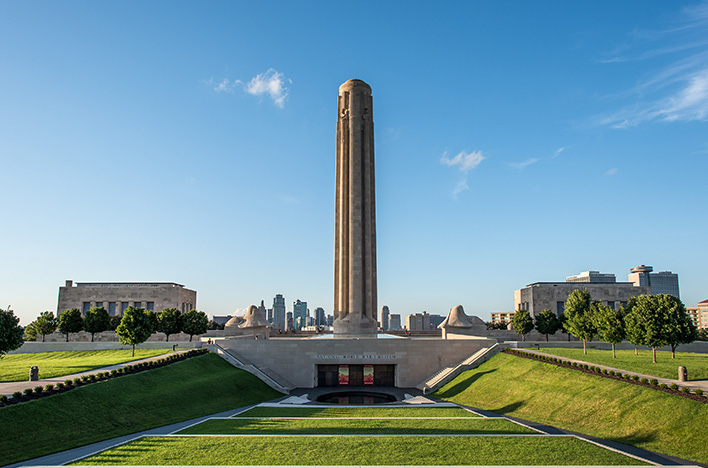 Kansas City hosted a record 24 million visitors in 2014, surpassing the pre-recession high seen in 2008. What’s the worth of those guests coming to town?

According to a 2014 economic impact study, tourism generated $5.1 billion in economic impact that year for the Kansas City region, including indirect and induced impact. Clearly, travel and tourism represents a significant portion of Kansas City’s economy.

In fact, visitor spending grew to $3.1 billion in 2014, increasing 12 percent in two years. Leisure travel and tourism, which accounts for 86 percent of day trips and 80 percent of overnight trips, affect the bottom line for small businesses and related industries.

Certainly some of Kansas City’s major attractions are what capture the attention of residents and tourists alike. And when Kansas City’s small businesses and lesser-known cultural attractions extend the welcome mat for visitors, the local economy reaps even more benefit.

This museum’s free exhibit provides insight into the city’s economic past. More than 300 Kansas City-made garments and accessories are displayed on a rotating basis from the donated collection of museum founders Ann Brownfield and Harvey Fried. At any one time, 35-40 items will be on exhibit. During the 1940s, the area employed more than 4,000 people in the garment industry. Manufacturing of garments was the second largest employer of any industry in Kansas City, Mo.

“The appeal of the city’s garment district is curiosity about a long-time industry that is no longer around,” said Denise Morrison, director of collections and curatorial services at the Kansas City Museum. “To think about how many people it employed, what roles they played and what garments were made here is fascinating to tourists and people who have lived here all their lives. The story appeals to the museum because it is such a unique Kansas City story.”

The National Museum of Toys and Miniatures

The 33,000 square-foot museum features the collections of Mary Harris Francis and Barbara Marshall. It now contains more than 72,000 objects. It is the world’s largest fine-scale miniature collection and one of the nation’s largest antique toy collections on public display.

“Our fine scale miniature collection features very tiny, precise art. It gives you an incredible appreciation for a relatively unknown art form,” said Jamie Berry, executive director of the museum. “Our toy collection spans decades and has both depth and breadth. It’s a great glimpse into our past. While times may change, the toys children play with have always taught us about our world and how we live in it.”

In the first year after reopening in August 2015, museum attendance doubled to 40,000 visitors. The membership program also grew 300 percent.

As America’s leading institution dedicated to remembering, interpreting and understanding the Great War and its enduring global impact, the Museum holds the most comprehensive collection of World War I objects and documents in the world. The Museum has been ranked by both TripAdvisor and Yelp as one of the 25 best museums in the U.S. The exterior features the Liberty Memorial Tower, which rises 217 feet above the courtyard, with four 40-foot tall Guardian Spirits carved by famous sculptor Robert Aitken.

“Ultimately, the Museum inspires thought, dialogue and learning to make the experiences of the Great War era meaningful and relevant for present and future generations,” said Dr. Matthew Naylor, president and CEO of the Museum.

The National World War I Museum and Memorial is one of many local attractions that distinguish Kansas City.

“A robust slate of appealing tourism-related opportunities is essential to the well-being of any city. We’re fortunate to have that in spades in Kansas City,” said Naylor. “In the Museum’s case, we’re the only one of this kind in the entire country. Our nation’s official World War I Museum isn’t in Washington, D.C. or New York or Los Angeles – it’s here in Kansas City. To be able to say that is special and something Kansas Citians should feel a tremendous sense of pride about.”

The Museum broke its annual attendance record for the third consecutive year in 2016 with more than 200,000 visitors. Additionally, more than 500,000 people participated in events held on the Museum grounds throughout the year.

From an economic impact standpoint, based on attendance in 2015, visitors living outside of the Kansas City metro region generated $18.3 million in 2015, with that spending supporting 184 jobs in the region (67 direct and 117 indirect).

Game attendance for the T-Bones at CommunityAmerica Ballpark in Village West ranks in the top five percent of independent professional baseball teams.

“It’s a friendly atmos-phere with 3,500 here on a Tuesday night, and it’s absolutely electric with 8,000 here for a Saturday night,” said Adam Ehlert, president of the Kansas City T-Bones.

The team’s fans are primarily metro-area families from Johnson, Jackson and Wyandotte County, plus north of the river. Area hotels, restaurants and the Convention and Visitors Bureau also promote minor-league baseball as an amenity to regional summer vacationers.

“We are here in the heart of Kansas’ most popular tourism area,” said Ehlert. “We hear regularly from area merchants how much our games impact their businesses. Our product really is affordable, family- friendly entertainment that happens to be professional baseball.”

Spending at ballgames is redirected into the local economy.

“Of about a five-million dollar annual budget, more than 95 percent is spent locally,” said Ehlert. “Just within our control, that is thousands of hotel rooms, restaurant meals, and hundreds of well-
paying summer jobs for students, retirees and everyone in between.”

“We were one of the first small businesses to take the leap into Village West,” said Ehlert. “I do think we played a significant part in its full build-out as a destination.”

According to an Economic Impact of Missouri Wine and Wine Grapes 2013 study, the state each year attracts 950,000 wine- related tourists that spend $220 million in wine-related tourism. They generate $52 million in retail sales of Missouri wine. Greater Kansas City claims its fair share of those tourism dollars.

Numerous wineries operate in and around Kansas City. They cross-promote each other via designated wine trails. Fence Stile Vineyards and Winery in Excelsior Springs, Mo., is part of the Northwest Missouri Wine Trail, one of 10 wine trails in the state.

“When one of us succeeds, we all succeed. An organized wine trail allows us to share resources, promote tourism by showcasing the area as a destination, and provide guests a more complete experience by guiding them to other venues on the trail,” said Shriti Hallberg Plimpton, owner of Fence Stile. “Organized events, such as a mulled wine weekend, give guests a reason to plan return visits and experience each winery’s unique take on a particular theme, further enriching their experience.”

Proximity to The Elms Hotel and Spa and bed and breakfast businesses proves mutually beneficial.

“The winery gives their guests a venue to extend their experience and participate in various events at the winery to create new memories,” said Plimpton. “Groups hosting an event at The Elms will often need additional activities for their guests. We are happy to partner with them to customize experiences to match their needs.”

Boulevard Brewing Company opened its Visitor Center in July 2016 to solve an ongoing challenge. Demand for tours and its tasting room had outgrown its capacity. In 2015, Boulevard hosted almost 60,000 visitors on some 2,300 tours, turning away thousands more due to lack of space.

“Our new Tours & Recreation Center has given us the opportunity to entertain thousands of brewery guests that we were not able to accommodate in our old digs,” said Amber Ayres, Boulevard’s Director of Tours & Recreation. “We are grateful for Kansas Citians and tourists embracing our new home.”

Local restaurants have earned national acclaim that raises the profile of their business and Kansas City cuisine, whetting the appetite for visitors eager to chow.

Joe’s KC is known nationwide for its barbecue and famed Z-Man sandwich. The barbecue restaurant has been featured on the Travel Channel, Food Network, and twice in USA Today for ‘America’s Tastiest Ribs’ and ‘Best Southern BBQ.’

“Some high-profile television personalities and national news organizations have sought us out for stories,” said Doug Worgul, director of marketing for Joe’s KC. “We’ve been featured in 2012 when the MLB All-Star game was here, and then in 2014 and 2015 when the Royals were in the World Series. Lots of national media were in town. Most came to our original gas station location to shoot video and interview our crew and customers. That has increased awareness of our brand outside of Kansas City. We see out-of-town visitors every day. We’re grateful and love the opportunity to show out-of-towners that Kansas City is the Barbecue Capital of The World.”

Based in Smithville, Mo., Justus Drugstore has received accolades and press mention in Bon Appétit, Travel and Leisure, NY Time and Food & Wine. That press has expanded the restaurant’s client base.

“We have regular customers from Lincoln, Tulsa, Ames, Des Moines and other cities,” said Jonathan Justus, executive chef and co-owner. “Some of those guests stay in Smithville or Kansas City for the weekend. That spending has an impact on the local economy.”

Rye and Bluestem, owned by chefs Megan and Colby Garrelts, have also earned national press, and, in turn, drawn customers from across the country.

“When guests travel to Kansas City, they want to experience our entire city from baseball to barbecue and everything between. Local chefs and restaurateurs contribute greatly to the culinary landscape that we call home,” said Megan Garrelts. “Bluestem, a nationally-acclaimed restaurant, has been published in countless publications and is the recipient of Best Chef Midwest by the James Beard Foundation in 2012. These accolades contribute to tourists’ decisions on where to dine and which cities in the middle of the country to stop and enjoy. The ‘fly over’ mentality of the Midwest is quickly going away. Many award-winning and talented chefs focus their cuisine around the regionalism of Midwest cooking and hospitality traditions that can only be found in Kansas City.”

“The hotel has a unique history familiar to people that grew up in Kansas City,” said Sheenal Patel, CEO of NVN Hotels. “We wanted the hotel to be more than a place to eat and sleep. We also wanted people to feel like they could spend all day here.”

The net result wholly transcends expectations of what hospitality looks and feels like in Kansas City.

“Tourists are looking for something a little familiar, but also what a city has to offer,” said Patel. “Hotel Phillips feels local and authentic. It’s not a big box hotel. It feels like you’re in KC. Getting coffee at Kilo Charlie, for example, is not like being at Starbucks anywhere. We’re trying to elevate the overall experience for hotels in Kansas City. Tourists can come to Kansas City and have a world-class experience.”

The sum is greater than its parts in Kansas City. These attractions, neighborhoods, small businesses and service-driven attitudes by owners translate into a feeling in Kansas City that’s hard to pin down and even harder to emulate. It feels good to stay here, and to eat, drink, shop, play and explore. It’s exactly what small businesses and the community want tourists and visitors to experience, especially when they choose Kansas City as a place to spend time and money.

Greater Kansas City is filled with destinations unlike any other place that attracts tourists interested in local flair and memorable experiences.

Located in Overland Park, the museum collaborates with the American Museum of Natural History to present world-class exhibitions on dinosaurs and other programming. The building’s colorful exterior is the only one in the U.S. to feature dichroic glass developed by NASA.

As the world’s first Explor-a-Storium to launch in 2017, this nonprofit will be “a radically immersive, ever-evolving, museum experience” built around children’s books through events, workshops, and programming. The Rabbit Hole will host LitFestKC, its first annual downtown literature festival, in partnership with the Kansas City Public Library on April 28-29. The event will draw children’s literature lovers to meet the first National Ambassador for Young People’s Literature and three Caldecott Medal winning authors.