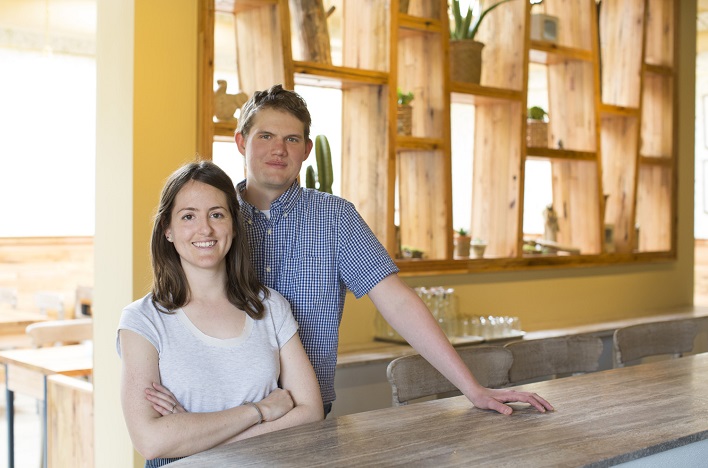 Heirloom Bakery and Hearth moved into its new space just last month, but owners Scott and Kate Meinke had been dreaming of their own building ever since they came up with the concept for the business a few years ago.

In 2013, the couple relocated from Washington, D.C., to Kansas City, Kate’s hometown, with the express intent to start their own bakery. When the business was just getting started, Heirloom rented space in the Farm to Table commercial kitchen in City Market, where they produced baked goods for wholesale clients and farmers’ markets.

In May, they opened the doors to their new home at 401 E. 63rd St. The former gas station not only has more space for Heirloom’s wholesale production, it also offers room for customers to sit down and enjoy a sandwich or pastry. (While Farm to Table had a lot of great qualities, Heirloom wasn’t able to sell directly to individual customers from that space.)

“We’ve got a lot of friends and family who live in that neighborhood,” Scott Meinke said. “We wanted to be kind of a neighborhood gathering spot.”

The remodel of the gas station was carried out by a local design firm, Utilitarian Workshop, which also built the tables and woodwork. The end result is a space that feels homey and comfortable. Thanks to the building’s open kitchen, customers can watch as Heirloom rolls out the dough for biscuits.

“Everything they did is amazing,” Meinke said. “… He was able to produce everything we were looking for.”

There are two big pieces of advice that Scott Meinke would offer other entrepreneurs interested in moving into a new space.

One, expect the process to run longer than originally planned, especially when it comes to getting official approvals. Heirloom, for example, needed to conduct environmental tests because of the building’s former status as a gas station. (Luckily, the old gas tanks had been removed, and the tests came back clean—no remediation work was needed.)

For businesses based in Kansas City, Mo., it might be a good idea to check
with KC BizCare, the city’s customer service center for business owners. The office helped Heirloom make sure that it had all the paperwork and licenses it needed.

And don’t be afraid to have high standards, Scott Meinke said. Heirloom’s new building was supposed to open last fall. But the Meinkes and their team needed more time to get all the building’s details 100 percent right.

“I think it’s important,” Meinke said, “not to just jump in and open as fast as possible.”

After all, the last few months are the exciting part of a remodel. You finally get to make decisions about how your space will look—your reward for dealing with boring but necessary details like plumbing rough-ins and other structural issues.

“That’s the fun stuff,” he said, “being able to see your vision in real life.”