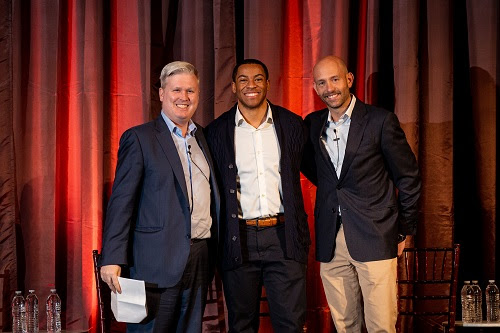 A startup with ties to Kansas City recently won a spot in the New York-based Financial Solutions Lab (FinLab).

Headquartered in Washington, D.C., Onward Financial Inc. founder Ronnie Washington graduated from NBKC’s FountainCity Fintech accelerator in December and has continued to do work out of Kansas City.

“It’s really, really exciting,” Washington said about winning the position. “I just received the news on Tuesday, so this week has just been crazy.”

Only five U.S. startups were selected for FinLab’s 2019 class. The program, headed by JPMorgan Chase and the Center for Financial Services Innovation, provides its members with $125,000 in capital as well as partnership and mentorship opportunities. It focuses chiefly “on boosting workplace financial health for underserved workers,” according to Colleen Briggs, head of community innovation for JPMorgan Chase.

Reflecting on a year of wins

Washington and five other fintech entrepreneurs participated in NBKC’s 2018 Fountain City Fintech accelerator for its first run in Kansas City. Topping off a successful and busy year, in early December Washington received a $1 million grant (along with $40,000 in technical assistance) from the Rockefeller Foundation and the Chan Zuckerberg Initiative as part of the Communities Thrive Challenge.

More than 1,800 startups of different backgrounds sent in proposals for the opportunity, Washington said. Members from the organizations visited Washington at NBKC to meet him and visit with clients in Kansas City.

“It was really powerful to see the Kansas City community rally around what we’re doing. It really helped showcase our work and what it can mean not just for Kansas City but other parts of the country,” Washington told Thinking Bigger. “It was a great showcase of Kansas City coming together to attack the issue of financial security.”

Originally based in Washington’s hometown of Washington, D.C., Onward is a nonprofit employer-based savings and credit app with three incentives: first, to help workers save directly from their paychecks into an emergency savings account; second, to provide financial education and advice on financial wellness directly to clients’ phones; and last, to offer an advance on a payday loan so people have ready access to capital in case of an emergency.

“We want to provide a sustainable way to build up a financial cushion — that’s essentially our mission,” Washington said.

Going forward into the new year, Washington is looking to scale up his business through new hires and national expansion by the end of 2019.