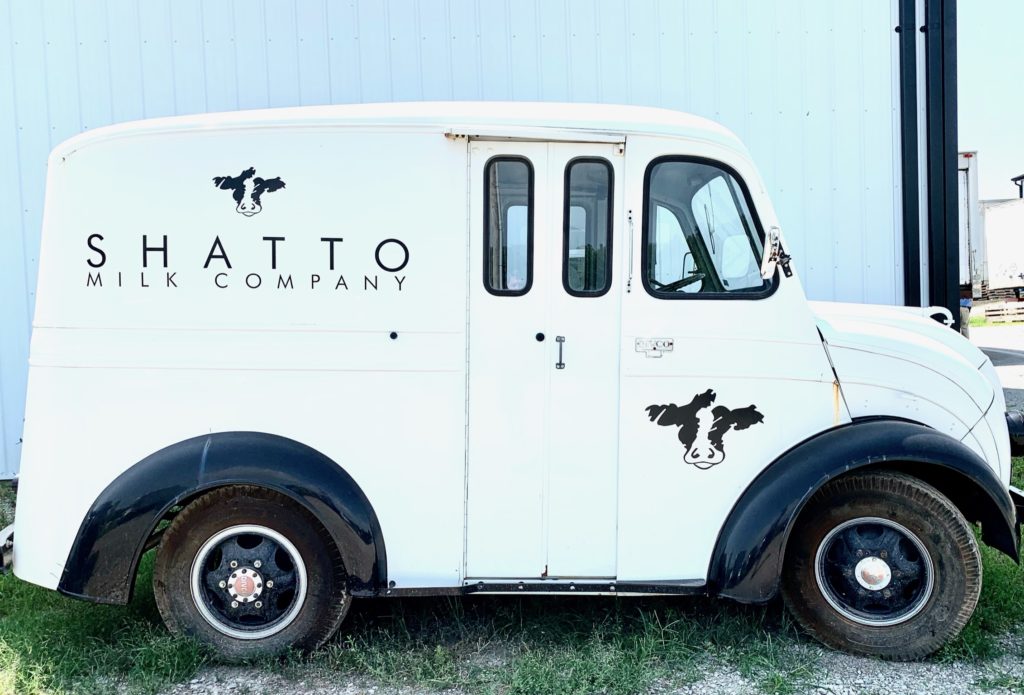 The 500 Holstein cows at Shatto Milk Co. may outnumber the human residents in their hometown of Osborn, MO (pop. 423). But they still get an awful lot of love here.

They have a herdsman dedicated to their care, along with a team that includes agriscientists and a nutritionist working to keep them happy and cool in the summer heat.

They have farmers growing some of cows’ favorite foods just for them.

They even have a massive fan club.

Yes, the Holsteins are the star attraction for the 150,000 or so visitors who make their way each year to the dairy to meet them, take lots of pictures, and perhaps even do a little milking.

In return for all this love, the cows give a lot of it right back, supplying abundant fresh milk not just to be bottled for drinking, but for the butter, ice cream and cheese products customers gobble up from Smithville to Belton and Bonner to Blue Springs.

Thinking back to her childhood on the farm, with chores like feeding calves and “bedding them down,” Barbara Shatto can scarcely believe what the operation has become.

“Sometimes I just blink my eyes and think it’s all a dream,” she said.

The success has landed her company on the pages of a Martha Stewart magazine and took her to Washington to meet a president.

But, as with so many small business success stories, it didn’t exactly start out that way.

Shatto Milk Co. was born of difficulty — and tough choices.

The farm that had been in Barbara’s family for nearly a century was once in trouble with commodity prices up and milk prices down. The herd was only 80 cows then, and the traditional model of selling milk wholesale wasn’t adding up.

Barbara, husband Leroy, and son Matt got together to decide what to do.

“It doesn’t take a genius to understand that red numbers don’t work,” Matt said of the farm’s losses back in those days.

Rather than sell or close down, they decided to take a chance on a very different approach: abandon wholesale and sell milk directly to families and grocery stores.

When we see a successful, well-established business, it can be easy to forget that, in many cases, things probably looked very different in the beginning.

The risks. The fear. The roadblocks.

The family felt all of that.

Barbara said, “There were challenges every day.”

With a new business model and a belief that people were craving fresher, more local products, the Shattos forged ahead in 2003, despite a lack of expertise in bottling, manufacturing, marketing or transport.

They tackled the marketing with simple things such as hitting the road and doing “tons of demos out there in the community,” Barbara said.

They appealed to a sense of “how things used to be” in terms of farming and food, and customers responded enthusiastically.

The company tripled its herd in the first year and found a footing in 10 area grocery stores.

This is where things got even more interesting: Demand quickly outstripped supply.

For seven years, the company played catch up, building infrastructure and processes — and the herd — to increase capacity while keeping its commitment to freshness that results from delivering milk only from Shatto’s own cows.

“To say that we had a struggle at the very beginning is true. It was just a different struggle than a lot of companies face,” Matt said.

The process of building capacity required Shatto to essentially stand up in short order several distinct “businesses” under one umbrella: the dairy operation; processing and bottling; and logistics.

Along the way, agritourism — the large numbers of people coming to visit the farm — became yet another significant operation.

Once the company made its supply-chain improvements, Matt was soon back in innovation mode, ready to launch Shatto Home Delivery, complete with the neighborhood milkman of days gone by. Shatto’s delivery service offers things like local bread, meat, eggs and coffee alongside its own dairy products.

A piece of advice the Shattos share from the experience of changing their business model and rebuilding is to not be afraid to ask for help because small business owners can’t possibly know everything on their own.

“Kansas City is very unique,” Matt said. “People want to help. They want to share insights. They want to provide connections that can help other local, small businesses grow.”

They also encourage you to build a core team of employees with strong managers around each discipline within the business.

And Barbara stresses the importance of being passionate about what you do — so you’ll have stamina to keep working hard through the challenges.

“Don’t give up,” she said, citing an important lesson learned in her 40 years as a nurse at the VA Medical Center. “Learn to find solutions.”

Looking to the future, Matt said the dairy will always protect the freshness of its products (for example, getting milk to customers as quickly as one day after bottling) while continuing to have fun with seasonal flavored milks and special editions in honor of Super Bowl or World Series victories and other community celebrations.

They also won’t stop brainstorming product ideas, such as Shatto’s newest offerings, aged cheese and cheese curds, and the dairy will expand its sales footprint in the region on a case-by-case basis, such as the Columbia and Warrensburg markets it recently entered in Missouri.

In addition to her excitement about these possibilities, Barbara has one more special item on her priority list for the future that might just earn a few moos from the stars of the show: a new, state-of-the-art barn. Coming soon!