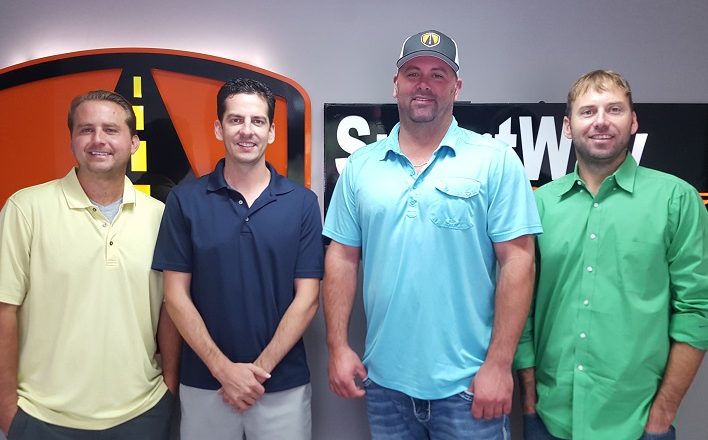 When SmartWay Transportation launched in 2010, it wasn’t the best time to start a small business. The economy was patchy at best. Lenders were practically hibernating.

But the company’s four founders—childhood friends who grew up together and all went to Blue Valley—could see an opportunity. Even in down times, “shipping is always going to be around,” President Chad Jegen said.

The OP-based logistics provider has not only survived, it’s thrived in the six years since. In each of the past three years, its revenue has climbed an average of 54 percent.

What started as a team of four has grown to include 30 people—the company had to move into its third headquarters in January. Another 20 hires will join them over the next year.

Be Ready When Things Don’t Go According to Plan

“Remember to be flexible. Nothing works out as you have put it down on paper,” Boehm said. “Everything changes constantly. With that, you have to have an open mind. Listen to what you’re hearing.”

The company functions as a broker: It lines up trucks to haul customers’ goods across the United States and Canada. When they got started, the SmartWay team was able to land clients, but they had a harder time signing up carriers to actually make the deliveries. The company was young enough that it didn’t have a track record yet. Carriers were hesitant to take on jobs they weren’t sure would pay off.

“We had to really prove to people that we were a serious company,” Bolan said.

So, in some cases, SmartWay’s founders had to make partial payment up front. But they hung tough. And they made a point of operating in a way that earned them a glowing reputation with their clients and their vendors.

“When we started, we made a conscious effort to do things a little bit differently, not become about the dollar, but become about the actual customer service,” Bolan said. “We routinely eat the cost of an unexpected overrun because markets fluctuate and we can’t foresee those. When we tell customers something, we want to honor what we say.”

They had to self-finance during the early days, too. Banks were lending to hardly anybody, let alone young companies.

“Even if you had collateral,” Jegen said, “they still didn’t want to give you a dime.”

It took Smartway’s team about a year and a half to build up their receivables before a lender would look at them.

“You’ve got to be patient, for sure,” Rice said.

Going from four people to eventually 50 is an explosive amount of growth. SmartWay has spent a lot of time, money and effort making sure it’s ready for a larger workforce. That includes updating and refining the custom software the company uses to operate its business, Jegen said.

SmartWay has hired recruiters to find some of its new people, but it’s gotten better results through social marketing. The company tasked Jennings Social Media Marketing with recruiting candidates through Facebook, LinkedIn and other online channels.

Traditional recruiters tended to bring only people who had worked in freight before. The social campaign turned up a wider selection. These were job candidates who didn’t always know freight, but who were skilled at sales.

It’s easier to take someone with sales chops and teach them freight than the other way around, Bolan said.

“We’ve also realized, too, that bringing on some people with freight knowledge, they’re hard to train to do things the way we like to see it done,” Jegen said.

Of the four SmartWay founders, only Bolan worked in freight before SmartWay. Jegen—self-employed since age 16—and Boehm owned a construction company, but were looking for something different. So was Rice, who had a job with a family-owned business that required him to travel a lot.

Hiring likeminded people who have the same goals has built up SmartWay’s culture, and that’s been a big advantage for the company.

“We have some phenomenal people who work here, and it’s exciting,” Rice said. “Mondays feel like Fridays.”