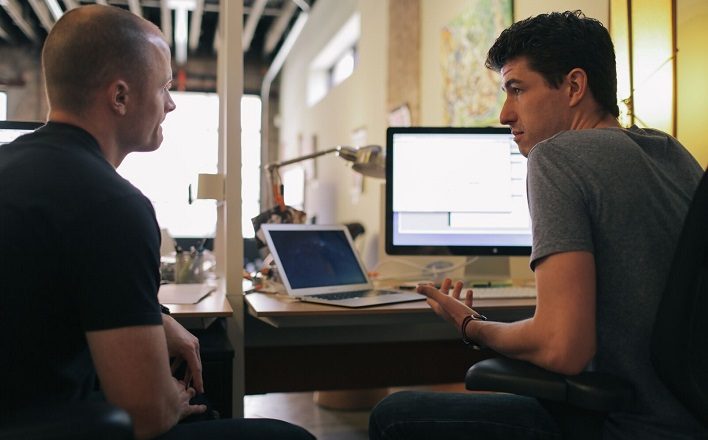 There’s no such thing as a perfect time to become an entrepreneur. Just ask George Brooks, co-founder of Crema, a digital design-and-development team based in the Crossroads Arts District.

Brooks went into business for himself about eight years ago. He had been working as a designer for a local communications firm when he and his wife had their first daughter, who endured a long hospital stay.

“She was at KU Med for the first seven months of her life,” Brooks said. “So I was always at the hospital and never at work, and at that time, I made the ‘smart decision’ to quit my job while my daughter was in the hospital. Because that makes sense, right?”

Looking back, it absolutely does. Brooks quickly became the go-to designer for local startups and development teams looking to build user-friendly apps and websites.

“We’ve grown and turned into a full technology company,” Brooks said. “We do everything from helping entrepreneurs and innovative businesses think through new product line ideas and validate if there is there going to be a product-market fit.”

Big things are happening for Crema, previously known as Cremalab, which has done work for large clients like AccuWeather, Blue KC and the Kauffman Foundation as well as up-and-coming companies like Zaarly, Neighbor.ly and HipHire. The company is cracking the $1 million revenue barrier, and its employee headcount should pass 20 early this year.

“Our business really is to create something that doesn’t exist and prove that there’s a market that’ll pay for it,” Brooks said.

One thing that’s helped Brooks stay on track? For the last several months, he’s been working with a mentor: David Richter, the chairman and chief technology officer at E Learning Creations Inc. and the founder of IPMG.

The two entrepreneurs were connected by Power of Two, a new Kansas City-based mentoring program. It’s designed to help smaller ventures that make less than $1 million, but are poised to scale up.

Here are three valuable lessons Brooks has learned from working with Richter.

BE TRANSPARENT WITH YOUR MENTORS

It takes guts to open up and talk about sensitive topics like your finances or how well you’re juggling work and home life. To get the most from your mentor’s experience, though, you need to speak openly.

The good news for Brooks is that Crema already had addressed a lot of the things that Richter brought up, such as monitoring reputation, handling benefits, creating an onboarding process for clients and building an advisory board.

Mom was right—being punctual is a form of respect, and if you don’t arrive five minutes early, you’re probably running late.

“If you’re working with a mentor that is providing you value,” Brooks said, “they’re probably very busy themselves.”

“We talk a lot here at Crema about what we call humble confidence,” Brooks said. “And humble confidence is that sense of saying I’m confident that we’ve built a really cool company, right, but I’m humble enough to know that we don’t have it all figured out and we’ve got a lot to learn.”

Just remember that your mentor won’t always be perfect, either.

“David has pointed this out: It is still your decision,” Brook said. “You don’t have to do what your mentor said explicitly.

“But when you can listen to them and adapt their feedback to what you need to do, that’s huge.”

POWER OF TWO WANTS YOU

The Power of Two mentoring program is looking for small, growing companies to take part in its next class. Candidates must run companies with annual gross revenue under $1 million, but be ready to scale up. Learn more at www.twopower.org.