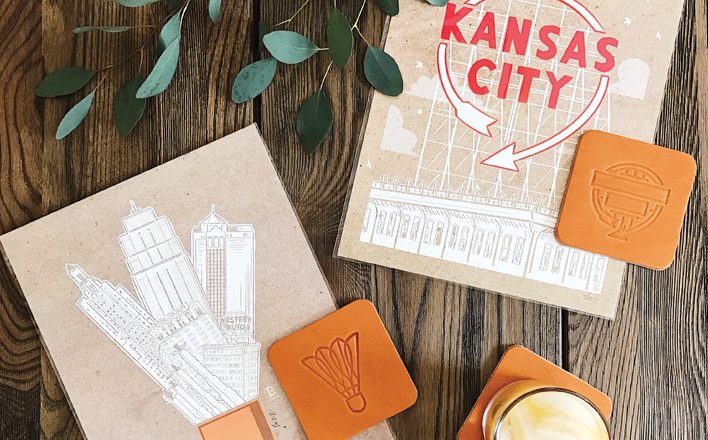 Change is embedded in the DNA of Kansas City. Throughout the years, Kansas City has embraced various identities, including as a frontier trail town offering a gateway to the West, a Cowtown with bustling stockyards, the hotbed of jazz and, of course, the birthplace of the world’s best barbecue.

Residents and businesses alike have found ways to celebrate all these elements of our heritage. Today’s local small businesses are no different. They too have discovered a niche in offering products that celebrate the KC brand and all the city has to offer here and now.

“We’ve tapped into KC pride by building on what already makes Kansas City great. The legendary stories and heroes
of the past, the love for our BBQ, our sports teams and music. We are taking the favorite memories of your childhood and your father’s childhood and bringing them back to life, so you can create new memories while paying homage to what you love,” said Charlie Hustle founder Chase McAnulty.

Yes, Kansas City area residents and businesses exude hometown pride, but the rest of the nation has discovered a not-so-well-kept secret too. Kansas City is not flyover country. Kansas City is the place to be. The positive vibes about the city are catching on elsewhere, contributing to tourism and driving economic growth. Local business owners have discovered that Kansas City is a brand they can sell not just to locals but to visitors too.

Why is Kansas City’s current brand equity so hot?

The appeal of the KC brand is driven by more than local pride. There’s plenty of achievement to back it up.

Kansas City has made strides as a 21st century hub for entrepreneurship, technology and transportation. Investment in the arts and entertainment has also burnished the city’s image. Infrastructure and economic development has propelled the city’s growth and desirability as a place to live, visit and conduct business.

As just one example, Google chose Kansas City in 2011 for the first trial in the world of its high-speed Internet access service fiber. Google Fiber has been an indispensable source for tech entrepreneurs and other small businesses in Kansas City.

“Not only did it add us to an exclusive group of gigabit-connected U.S. cities, but it also created a nice boost of energy to the then-nascent startup ecosystem in Kansas City,” said Matthew Marcus, executive director of the Kansas City Startup Foundation.

The KC Streetcar, Sprint Center and Kauffman Center for the Performing Arts are among the major projects during the past decade that have reinvigorated the vitality of Downtown and created excitement in Kansas City overall. The streetcar, for example, logged nearly 1.4 million trips in 2016. Sprint Center hosts an average of 108 events each year, and it attracted 5.6 million visitors between 2007 and 2012.

The Kauffman Center for the Performing Arts has raised the profile of Kansas City internationally. Ranked “as one of the World’s 15 Most Beautiful Concert Halls,” the Center is a cultural anchor and magnet for growth. The Center was also featured in curbed.com as one of “The 21 Most Spectacular Theaters in the U.S.”

“Since its grand opening in 2011, the Kauffman Center for the Performing Arts has welcomed more than 2.3 million visitors to enjoy more than 300 performances held on its stages annually, and has contributed to the growing level of activity of the Crossroads Arts District,” said Kauffman Center for the Performing Arts President and CEO Paul Schofer.

A strong arts environment boosts Kansas City’s cool factor and cultural enrichment. Ranking fourth on Travel + Leisure’s 2015 list, “These Are America’s 20 Most Cultured Cities,” the magazine recognized many of greater Kansas City’s arts institutions. The Nelson-Atkins Museum of Art, Kemper Museum of Contemporary Art, Nerman Museum of Contemporary Art, the Lyric Opera at the iconic Kauffman Center, and the Blue Room inside the American Jazz Museum were all name-checked.

Time magazine ranked the Nelson-Atkins Museum of Art’s 2007 addition of the Bloch Building number one on its list of “The 10 Best (New and Upcoming) Architectural Marvels.” The building was part of $200 million in renovations at the museum.

“Kansas City is a secret that is out of the bag; more and more people are flocking here,” said Julián Zugazagoitia, CEO and director of the Nelson-Atkins Museum of Art. “At the Nelson-Atkins, we are looking forward to the opening in March of the Bloch Galleries.”

And, of course, a look at Kansas City’s value as a brand wouldn’t be complete without acknowledging its prominent role in the Midwest as a diehard sports town. The top-caliber mix of professional and college sports events, such as March Madness, makes Kansas City a regional powerhouse for tourism and economic activity.

For example, the Kansas City Royals won the 2014 American League Championship Series and 2015 World Series. Both major league baseball seasons were a homerun for Kansas City, drawing invaluable publicity, visitors and worldwide media attention. In 2013, Sporting Kansas City claimed the club’s second MLS Cup championship, and in 2015 the club advanced to its fifth straight postseason appearance. Similarly, the Kansas City Chiefs have reached postseason in 2010, 2013, 2015 and 2016.

Visit KC, a nonprofit responsible for promoting the region as a top-of-mind travel destination for the leisure, convention and group tour audiences, has achieved notable feats in promoting Kansas City.

Its efforts have also generated more than 600 articles about Kansas City through public relations, accumulating an estimated 181 million PR impressions in publications. And Visit KC’s innovative marketing campaign, “How We Do Kansas City,” showcased the city’s culinary, arts, spirits and tourism appeal by targeting consumers, meeting planners and media in Chicago and New York.

At home and across the nation, Kansas City has shaped its identity and built its brand into an asset that makes this thriving metropolis on the plains anything but plain. From Cowtown to chic center of tech and innovation, arts and culture, business and sports, Kansas City occupies a prominent and proud place in the middle of the map.

And all of this adds up to opportunity for many Kansas City businesses who are turning pride into profits. They have stepped up to define and promote Kansas City as a brand through apparel, art, gifts and more. Apparel companies such as MADE, Charlie Hustle, Flying Pig Local Mercantile, and Normal Human have created product lines built in part on Kansas City’s appeal a brand.

“Charlie Hustle was created with a vision to be a strong competitor in the collegiate apparel realm. When the company launched in 2012, the first collection consisted of 16 designs, one of them being the “KC Heart.” The KC Heart has since become an icon of the city and of our brand. It helped us see how strong the KC pride is to those that have roots in Kansas City and helped us want to build on that while continuing to grow our collegiate collections.”

Adam and Katie Nelson opened Flying Pig Local Mercantile in Downtown Kansas City “to provide a venue for local makers … to put their creations to be offered to the public.” They carry apparel, art, gifts and housewares that represent the brand of Kansas City through handcrafted goods. Flying Pig is a frequent stop for local shoppers and tourists seeking souvenirs tied to Kansas City.

“We are both lifelong Kansas Citians and love Kansas City,” said Katie Nelson, co-owner. “The newfound pride in our city has been inspiring. As makers ourselves, we have seen a rise in local artisans making all kinds of amazing things.”

“Showcasing them has been a rewarding experience. They create great things and are also an amazing group of people,” added Adam Nelson. “We decided early on that items in our store would only be from local Kansas City makers. Our customers know that anytime they shop in our store, they are supporting someone local.”

“Much to our elated surprise, we were welcomed into the community with open arms. Our business took off in ways we could not have anticipated,” said Tim Tuohy.

Over time, Kansas City Canning Co. became much more
than just a name.

“Being able to identify with Kansas City and the pride that people have here has given the name much more gravity,” said Tim Tuohy. “Now, there’s a sense of responsibility to the community and it has made me feel that there is weight to what we do.  It’s become less a job and more a vocation.”

That commitment to community carries over to the company’s relationships with its sources and customer base.

“After developing relationships with local vendors, farmers and customers, we feel it’s especially important to support other local businesses in any way that we can,” said Tim Tuohy.  “Furthermore, we strive to highlight all of the great produce that is grown in and around the metro area. In hindsight, I feel lucky to be a part of the community.  If anything, it makes me feel like Kansas City has adopted me and it’s important to take care of your own.”

Dan Mahaney and Pat Egger co-founded Normal Human in 2012 as a retail screen printing shop that sells Kansas City-centric apparel and goods online and at its Crossroads store. The “Kansas City craze” had not hit yet when they opened.

“We didn’t really anticipate the degree to which city pride would eventually inform our product design,” said Mahaney.
“We had a couple local-centric designs when we started, but much of what we were doing at the time was abstract, pattern, or illustrative design. Since we design and print our own items, we’re able to react pretty quickly to our customers’ wants and needs. When the wave of pride came crashing ashore, we began designing and printing more of that and also doing small batches of non-locally focused designs.”

Made in Kansas City

Made in Kansas City draws attention to and celebrates the city’s identity and its makers. The retail shop launched its first location in Prairiefire in Spring 2015. It has since opened stores in Briarcliff Village and Prairie Village and has product within Hallmark in Crown Center, on the Plaza and in Lee’s Summit.

Local pride is palpable to Keith Bradley, one of the store’s three owners and founders.

“Not only are we proud of our sports teams that have received national attention over the last several years, but also of our coffee, breweries, restaurants, art and apparel,” he said. “For the longest time in our country, the Midwest came second to the coasts. I think there has been a shift nationally to look inward. I think enough people have tried and become weary of life in the big cities and have realized that we have all the great cultural aspects of a major metropolitan area and virtually none of the drawbacks.”

Made in Kansas City carries foods, candles, art, jewelry, books and other products made in the area or share a Kansas City theme. A connection to Kansas City adds value to the gifts.

“Customers are looking for something that exudes Kansas City,” said Bradley. “Often, it is not for themselves, but for someone who lives outside KC. It is really fun to be a part of and to facilitate that connection.”

Made in Kansas City’s roster of makers take pride in their wares and representation of the city.

“Our makers in the food and coffee categories have showcased their products and skills in national competitions,” said Bradley. “They are proud and shameless to represent their Kansas City-made and even Kansas City-branded products against products from around the country. The response they get is overwhelmingly positive about not only their product, but also all the good things coming out of KC.”