Delegation of Authority: The Business Owner’s Secret to Empowering Employees and Finding More Time in the Day

The business and affairs of a corporation are managed by or under the supervision of a board of directors or, in the case of a limited liability company, by the LLC members or a board of managers.

A “board” may consist of a single director or manager, as is frequently the case with a small business in its early stages where the founder might be the sole board member and sole decision-maker. As a corporation or LLC grows, the board may increase in size with the addition of directors or managers, some of whom may be “independent,” meaning not company owners or employees.

Over time, the business may experience growing pains, including an increase in the number, variety and frequency of decisions that need to be made. This can quickly consume time and leave little room to focus on business development, company strategy, self-care and family. The solution: delegate.

Delegation is much more than handing off a task to complete. As Clockwork author Mike Michalowicz puts it, delegation means assigning responsibility for a business outcome to someone else.

For the owner of a small business who is accustomed to being the sole decision maker in control of every outcome, delegation can be a scary proposition. But as a company grows, it is critical that business owners consider how delegating authority for routine business decisions can benefit the organization overall by improving efficiency, empowering employees and freeing up time to focus on other equally important matters.

Whether the board of a corporation or LLC is made up of business owners, independent directors or managers, or a combination of the two, the board is ultimately responsible for overseeing the company’s operations. That said, responsibility for day-to-day operations and routine decision-making may be delegated downstream, for example to a president or CEO. Delegation of authority at this level is expected within corporations but not necessarily within LLCs, where appointing officers is sometimes the exception rather than the rule.

Where a president is in place, the line can be blurry between his or her day-to-day decision-making authority and the decisions reserved to the board. A critical starting point is turning to the company’s governing documents — such as a corporation’s bylaws and an LLC’s operating agreement — for primary guidance. A separate delegation of authority policy tailored to the organization might add clarity and include additional or specific parameters.

A board isn’t interested in micromanaging a company’s operations, so a delegation of authority policy should give the president appropriate leeway to manage the company, while being mindful of the board’s ultimate responsibility to ensure that the president manages the company responsibly and in line with its mission and strategy.

When a board delegates authority for routine business matters to a president or CEO, the board can focus on major decisions that typically include:

Delegation should begin at the top with an appropriate grant of authority to the president and continue with the president delegating authority and accountability for decision-making in routine matters to other executive officers and senior or middle management. The key is to align the authority granted with employee skill sets, job responsibilities and experience.

At this level, the delegation of authority policy might cover routine contracts, capital expenditures and other financial commitments, hiring and replacing subordinate employees, confidentiality commitments and resolving business disputes. The authority could be very broad or by category alone, or it could include other parameters such as the length of the commitment or the dollar amount involved. 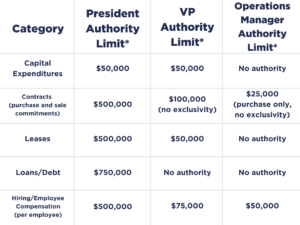 When delegating authority for routine decision-making, it is critical to create clarity and consistency with written guidelines detailing the scope of the delegation. With a simple chart such as the one above, delegation is more likely to be a success.

According to McKinsey & Company, delegating decisions and accountability to employees empowers them and builds their managerial skills, but these entrusted employees need the right tools, guidance and skills to be able to make good decisions.

A delegation of authority policy will serve as a guide, but we can’t overemphasize the importance of training and support from upper management if the delegation is to work as intended and be a success. McKinsey & Company discusses success in delegation of authority and says it hinges on having the support of upper-level managers who resemble coaches more than micromanagers, helicopter bosses or cheerleaders — that is, hands on but not directive, controlling or on the sideline.

Business owners who aren’t quite sold on the idea of delegating authority for business decisions realize there’s only so much time in their day and that their primary focus should be on growth, strategic planning and mentoring employees who are the future leaders of the organization. But delegation is easier said than done. Delegating authority comes with a time commitment and challenges of its own, but empowering employees to make routine business decisions and freeing up time for other equally important things (like taking a real vacation maybe) will be well worth the effort at the end of the day.

Sheryl Nelson is president of On Point Business Administration. Sheryl’s experience as a business and M&A lawyer provides a unique perspective to clients retaining On Point as outsourced chief administrative officer. That insight also benefits exiting business owners who need to get their businesses in order before going to market and responding to thorough due diligence requests from potential buyers.