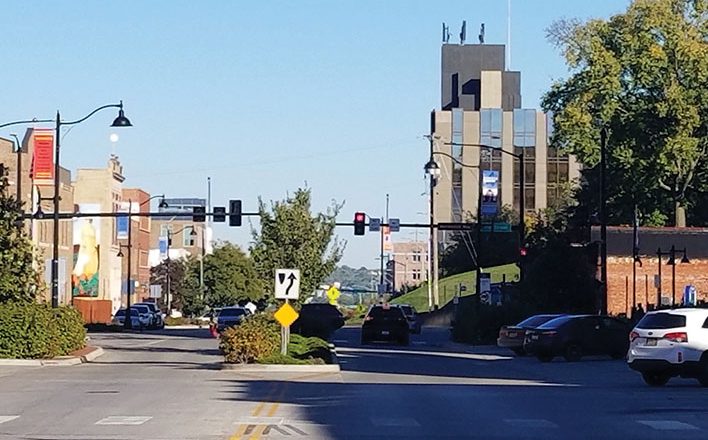 In another sign of budding urban development, a grocery soon will sprout where a parking lot now sits in the historic Strawberry Hill neighborhood of downtown Kansas City, Kan.

The Merc Co+op plans to open a $6 million, 12,000- to 14,000-square-foot grocery at the southwest corner of Fifth Street and Minnesota Avenue by early 2020. Currently, there is no full-service grocery in the vicinity.

In addition to providing a much-needed service to surrounding residents, area officials and advocates hope The Merc store will contribute to small business growth and overall development in downtown KCK, located on the east side of Wyandotte County.

It is an area that has struggled against decline and disinvestment for many years, in stark contrast to the development boom that has rolled through suburban western Wyandotte County.

“The grocery store is the first phase,” said Katherine Carttar, urban development manager for the Unified Government of Wyandotte County/Kansas City, Kan. “We’re in talks with a number of other parties that are interested in putting additional retail and some multifamily housing on that block, which will make this an even better place for small businesses.”

Rita York Hennecke, general manager of The Merc Co+op, said grocery stores “have been known to be anchors in terms of attracting other businesses. We look forward to expanding current partnerships and building new relationships with local farmers and producers.”

Joe Krizman, whose Krizman’s Sausage business is a longtime Strawberry Hill stalwart, said The Merc could serve as a neighborhood magnet.

“The more quality businesses we can have in this neighborhood that draw people, the more it benefits the neighborhood,” Krizman said. “They will draw people moving into the lofts in downtown Kansas City, Mo., which is only five minutes away. Strawberry Hill has caught on fire the last couple of years and is really growing. This could be a destination spot.”

‘CLAMORING’ FOR A GROCER

The Merc Co+op plans represent the latest chapter in efforts to revitalize downtown Kansas City, Kan. Former UG Mayor Mark Holland pushed for a “Healthy Campus,” which would have included a grocery and a YMCA-run community center, at 10th and Minnesota.

But no ground had been broken for the Healthy Campus by the time Holland was defeated for re-election last year by current Mayor David Alvey. When the UG Commission took another look at the Healthy Campus in February, it decided to concentrate on landing a grocery for downtown KCK.

“The grocery store was the primary amenity the public was clamoring for,” Carttar said. “We decided that first we would get the grocery store nailed down, and then we’ll work on other pieces to fill out the rest of the block, as well as the larger vision of the Healthy Campus. I think all the pieces will be there, it just won’t be the original Healthy Campus.”

UG officials also decided to move the development to Fifth and Minnesota. Many people live and work in the vicinity, and more are on the way.

Across Fifth Street from the grocery store site, the University of Kansas Health System is renovating the former Environmental Protection Agency’s Region 7 headquarters into the health system’s new Strawberry Hill campus, which will house behavioral health services and administrative functions.

Also bordering the intersection are the Hilton Garden Inn, the Jack Reardon Convention Center and the Children’s Campus of Kansas City.

Nearby are residences and government and court buildings. Carttar said more than 5,000 people work within a couple of blocks from Fifth and Minnesota, and many people live within half a mile, which is considered within walking distance to a grocery store.

“Additionally, it is only a block and a half from our primary transit center, which is at Seventh and Minnesota,” she said. “The population that will find this an easily accessible grocery store should be quite a lot.”

A PLACE TO ‘SHOP, GATHER, EAT AND LEARN’

The Merc Co+op started in 1974 as a buying club in the basement of a house. The co-op’s mission is to provide the community “a place to shop, gather, eat and learn by offering real food and sustainable products at reasonable prices through cooperative ownership and responsible commerce,” according to its website.

Co-op groceries such as The Merc are run by a board of directors elected by members who buy ownership shares.

The Kansas City, Kan., store will be The Merc’s second location. It currently operates a store in Lawrence.

“The Unified Government approached us almost two years ago about opening a store to help provide access to groceries,” York Hennecke said. “Opening this store allows us to learn how to effectively run a multi-store co-op.”

Under a management agreement approved by the Unified Government Commission in late August, the UG will pay for construction of the store and will own the building. The commission agreed to spend $6 million on design, planning and construction. The financial package includes a $4.2 million cash contribution from the UG’s hotel revenue fund and tax increment financing worth $1.6 million. The hotel revenue fund was generated by the city’s 2016 sale of the Hilton Garden Inn.

The Merc will operate the store. The agreement states that The Merc will “actively use its best efforts to recruit, hire and retain as employees the residents of Kansas City, Kan.,” and especially “those in close proximity and in adjacent neighborhoods.”

York Hennecke said the exact number of employees to be employed at the KCK store has not yet been determined. The Merc currently employs 107 employees at its Lawrence store and at a kiosk/café it operates at the Lawrence Public Library, she said.

In addition to a full line of groceries, the KCK store also will operate a small café and coffee shop and will offer community-based cooking classes. The Merc will be responsible for all operational and maintenance expenses.

The agreement includes a $540,000 stabilization fund that The Merc can access during the first three years of operation if specified sales benchmarks are not achieved.

“The co-op and the UG commissioned two market studies to determine the sales goals we feel will make this store successful,” York Hennecke said. “There is a cap for each quarter, so we don’t get the $540,000 all at once. If sales exceed our goals, then we will pay a management fee to the UG based on a small percentage of sales above the goals, in lieu of paying a fixed rent.”

If the store attains success during the first three years, The Merc can enter into a longer lease before the three-year term is up, York Hennecke said.

York Hennecke said The Merc is now working with the UG, architects and store planners to develop the store’s design and solidify the timeline.

“Throughout this process, we are seeking community input so that we can gain an understanding of what the community wants from their neighborhood grocery store,” she said.

IMPACTS NEAR AND FAR

The management agreement states that the UG will be permitted to license, lease or operate a farmer’s market on the development site. The market would be restricted to vendors selling their own produce.

Carttar said the site also could accommodate restaurants. Other possibilities include small retail spaces for home-based businesses that want to move to a commercial area.

Krizman, whose family has been in the sausage-making business since 1939, said the new grocery store could dovetail with his plan to get his products into more retail grocery stores.

“If they (The Merc) approach me and we can come up with a deal, I’d love to have my products in there,” he said.

Besides the direct benefits to the neighborhood, Carttar said bringing a full-service grocery store to downtown KCK is the right thing to do for the entire city and county.

“As the local government, our goal is to make everywhere in KCK and Wyandotte County a good place for people to live and work and invest,” she said. “You want to make sure you’re serving all your residents. There’s a general agreement that we should continue to invest in the west side but share that focus with downtown, so we can make sure we have a nice, stable city.”