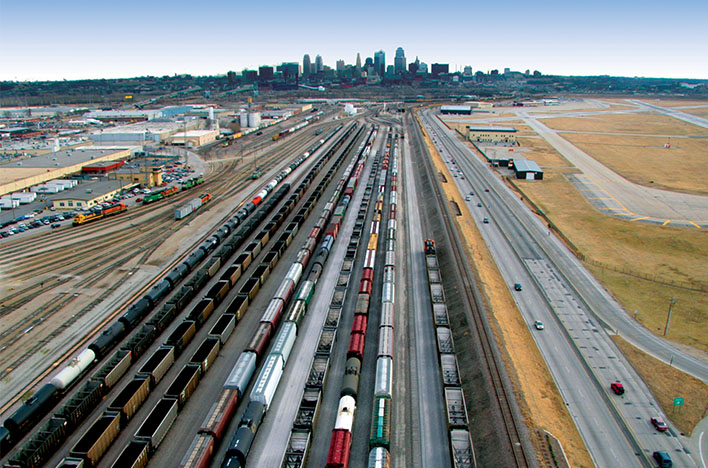 Chris Gutierrez, president of KC SmartPort, is still surprised that in the last five to six years, over 25 million square feet of product and distribution building has been built on a speculative basis, meaning there was no tenant signed on at the outset of construction.

“Developers and real estate teams are building these, hoping they get a client or tenant — and a majority of those have been filled. So the demand has been right behind it,” said Gutierrez.

KC SmartPort’s job is to promote that space, as well as the opportunity to build facilities, to national and international companies. The not-for-profit economic development organization formed in 2000 as an outcome of several late-1990s studies on ground transportation in the region.

Today, the organization courts freight-based companies, those in manufacturing, distribution and warehousing, to locate within Kansas City’s 18-county bistate region.

The mere existence of KC SmartPort illustrates the region’s foresight to capitalize on its central location, propelling it to one of today’s leading markets for the logistics industry.

Many factors are responsible for that success, beginning with the obvious — its geography; its four modes of transportation: air, rail, road and water; and finally, its economic landscape to foster third-and fourth-party logistics firms, many of which are small businesses and independently-owned.

The sum of these factors is what ultimately attracts companies to locate some or all of its logistics here.

“Almost every company responds to the ability to reach their customer base more efficiently because of that central location,” said Gutierrez, highlighting distribution and manufacturing.

For distribution and warehousing, the four modes of transportation create a compelling value for companies who seek efficient shipping.

Take, for example, CVS reaching its regional stores, or e-commerce companies like Amazon or Jet.com reaching customers. “The ability to reach customers has been primary. Second and third is, of course, the workforce and the availability of buildings here,” continued Gutierrez.

“On the manufacturing side, it really is kind of that core manufacturing workforce that we have here, as well as the ability for inbound raw materials to come in on those modes and the finished product to be delivered to customers.”

The incoming and outgoing efficiencies for manufacturers are amplified with the four modes of transportation versus communities that have only two or three modes.

Take the automotive sector, for example, which has grown its KC footprint. This year, French auto parts manufacturer Faurecia broke ground in Blue Springs on a 250,000-square-foot manufacturing facility to serve General Motors, and many smaller companies locate here to outfit Ford Transit vans for trade contractors. Furthermore, a new trend is emerging among food manufacturers, for both ingredients and food processing.

A less obvious factor, but just as important, Gutierrez credits supportive real estate communities and local governments for advancing distribution and manufacturing in the region.

“There’s a speed to market as we talk about companies when they’ve reached us. They have a short decision time, time to pick a location, and we’ve got to all be on the same page to move that speed to decision as fast as the companies wants — and we do that here,” said Gutierrez.

KC SmartPort estimates roughly 230 million to 240 million square feet of industrial building space is either in use or available for companies locating logistics in Kansas City. That volume of distribution and warehousing requires versatile transportation.

The BNSF Railway’s Logistics Park Kansas City (LPKC) Intermodal Facility in Edgerton is an example of the region’s commitment to transportation. Here companies can benefit from 64,000 feet of track (eight 8,000-foot strip tracks), 4,300 container stacking spots and eight wide-span all-electric cranes, among others.

According to BNSF, the LPKC is the only full-service facility in the western two-thirds of the United States offering the combination of domestic intermodal service – container, trailer, expedited and standard service levels — international intermodal service and direct-rail/carload service.

The intermodal facility and industry strength also attract another sector of business — third- and fourth-party logistics firms. Third-party firms manage or perform logistics services, such as trucking, while fourth-party firms are logistics specialists, acting as a sort of middle man for clients to ship their assets.

These firms are part of the entire logistics equation and contributing to the region’s success.

“The Midwest is a great location for intermodal as it is the second largest intermodal hub in the United States behind Chicago,” said Karen Duff, president and CEO of International Express Trucking (IXT).

Her certified woman-owned trucking company specializes in international intermodal drayage services — short-distance shipping via ground transportation — in the Midwest. When she took over the company in 2001, Kansas City was central to the four railroads.

“IXT started in 1994 as a U.S. Customs courier service. In 2001, our courier customers asked IXT to expand our services to include draying ocean containers to import/export customers,” Duff said. “I cashed in my and my husband’s 401(k) to finance the expansion.”

Much like IXT, Maze Freight Solutions also benefits from the region’s logistics-friendly atmosphere. The fourth-party woman- and minority-owned logistics consulting firm was founded in 2017 by Jy’Juan (Jy) Maze.

“In this trillion-dollar industry, I saw an opportunity to create a logistics consulting service for small and large companies that don’t have time to shop their rates, keep up with the current market and find ways to cut cost, awarding them higher profit margins,” said Maze. “This keeps everyone honest and protects the customer from getting gouged.”

‘Kansas City is on the horizon’

Maze, who already was a veteran of the logistics industry in Kansas City, saw the potential for growth.

“This is a city that is growing beyond boundaries. There’s new development, new hotels being built, a new airport in motion. … Kansas City is on the horizon. A place where firms know they will be successful,” she said.

Gutierrez agreed, highlighting the regional approach of both states and the communities within them to make sure companies are attracted to Kansas City.

“We are a pretty consistent region that looks at transportation infrastructure needs and business needs. You can applaud the Kansas City livability, people and companies wanting to be here,” he said. “There’s an appreciation for the environment, whether it’s the business environment or the quality of life, and the cost of living here. All of those factors play into why Kansas City is so successful.”

Turns out Kansas City’s geography is central to its success, but its location on the transportation map is no longer the only reason product is on the move.

Gutierrez said his office predicts that for logistics, Kansas City is in the sixth or seventh inning and “there’s a lot of game left. People joke that it might even go into extra innings.”

Third-party logistics firm: Outsourced logistics services hired by a company to include management of the company’s procurement, fulfillment, storing or shipping. Also called 3PL, these firms can perform the services contracted, such as trucking.

Fourth-party logistics firm: Outsourced logistics services that manage and coordinate the activities of 3PL firms. These 4PL firms match the services needed by a company to another business that can provide those services, such as transportation, but they do not provide the services themselves.

Drayage: Transporting goods a short distance via ground freight. In Kansas City, this usually means transporting it from an intermodal to a warehouse or another intermediate destination.

LTL: Outsourced logistics services that manage and coordinate the activities of 3PL firms. These 4PL firms match the services needed by a company to another business that can provide those services, such as transportation, but they do not provide the services themselves.

FTL: Full truckload shipping — a load that will take up an entire truck’s trailer space, which is typically 10 or more palettes.