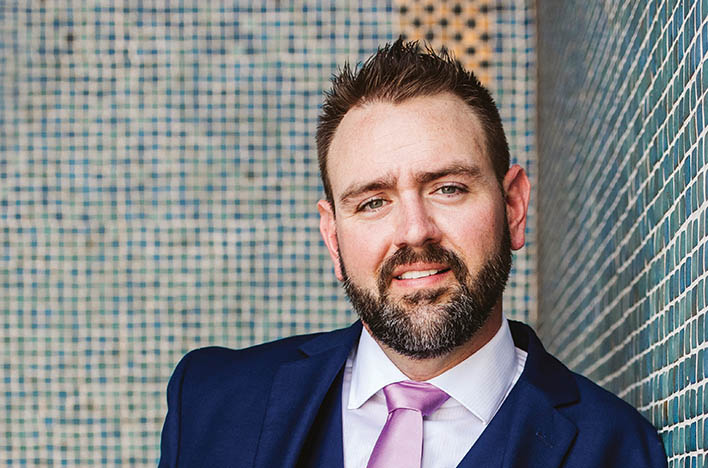 Wade was living downtown and working as a web developer and graphic designer when the former college football player grew frustrated with the lack of options for adult sports in the city.

Wade, a self-described “tech nerd,” rented a field and put his skills to use by building a website for players to join teams and teams to join leagues.

“It was for me and my friends to play softball and sand volleyball,” said Wade, the founder and owner of KC Crew. “Three years later, we had 3,000 people playing.”

Now in its seventh year, KC Crew has six full-time employees and 70 part-time officials and has grown beyond its downtown roots, partnering with parks and recreation offices in Overland Park, Belton and Kansas City, Mo., to offer enhanced adult recreation leagues. The company has 15,000 league participants, and 4,000 people have participated in its one-day events this year.

“They are focused on helping the community and youth programs,” Wade said of city parks offices, “and they have to deal with maintenance issues. They don‘t have someone committed to adult programing.”

KC Crew, he said, can focus on adult sports and add a social aspect. KC Crew partners with local bars and restaurants to offer specials to athletes during “bar-of-the-week” promotions that provide social events for participants and improved weeknight receipts for businesses.

Wade said KC Crew has been successful in “activating unused parks” around the metro. It started in 2012 in Roanoke Park in Kansas City, Mo. Wade said that park had one sand volleyball court, no lights and no bathrooms when KC Crew started scheduling games there. The company brought in lights and portable toilets and sold out the court every night.

The city’s parks and rec department responded by adding lights, new sidewalks, a new playground and improved the court. With interest growing thanks to KC Crew, the department put in six sand volleyball courts at Berkley Riverfront Park.

“You’ve heard of, ‘If you build it they will come,’” Wade said, quoting “Field of Dreams.” “Well, if you play there, people will come. We’ve broken down barriers. Then it’s perceived as a safer, more vibrant community.”

In September, KC Crew’s indoor leagues — volleyball, basketball and pickleball — moved to HyVee Arena. The company offers games five nights a week in the renovated venue formerly known as Kemper Arena. Its offices will move to the arena by the end of the year.

“We were working with five or six community centers with different managers, and it was hard to program,” Wade said. “Now all our indoor activities are in one place.”

The arena, which will be home to bars, restaurants and shops, also fits Wade’s mission to combine sports and socializing.

“This is why I started KC Crew,” he said. “More and more people — young professionals — are living down here, and the arena is the closest thing. Come play a game and have a beer.”