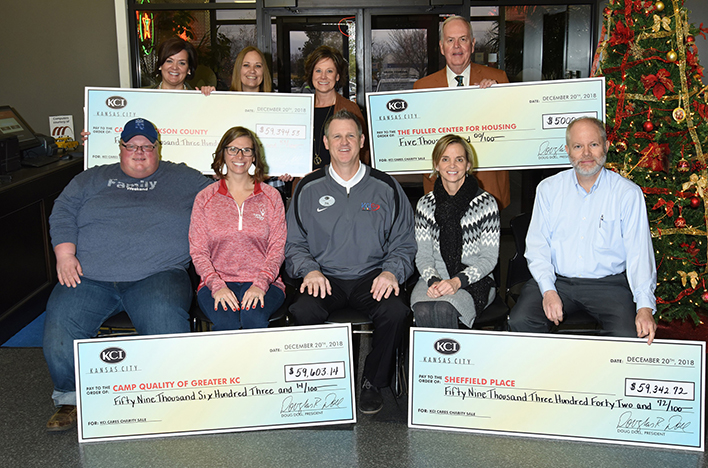 If someone told Doug Doll six years ago that his business would donate over $1 million to children and women in need, he wouldn’t have believed them.

However, over half a decade later, Doll and his team at the KCI Auto Auction have supported countless charities, resulting in $1.25 million of donations. Doll continues to give back to the community, including $183,000 donated in 2018.

‘It was our business to give back’

In 2008, during the Great Recession, Doll’s business struggled. It wasn’t until 2012 that, thanks to his business’s success, he was in a position to focus his efforts on giving back.

“Our team felt like it was our business to give back to the community—especially to the Kansas City community—because they have embraced us in this area,” Doll said.
KCI Auto Auction contributes primarily to three charities: Jackson County CASA (Court Appointed Special Advocates), which supports neglected and abused children under court protection; Camp Quality, a camp designed for children battling cancer; and Sheffield Place, a shelter dedicated to aiding homeless mothers and children. The company reserves additional funds to donate to another charity or even its employees.

“At the end of the year, we divide (funds) into three charities but we also keep a fourth out called ‘pay it forward,’ and we pick another charity that might be struggling,” Doll said. “And throughout the year, we’ll help some team members out.”

To facilitate its philanthropic work, the company created KCI Cares, a special team within the business that focuses exclusively on giving back to the community.

Angie Blumel, President and CEO of Jackson County CASA, said she has endless gratitude for the team at the KCI Auto Auction and KCI Cares.

“Since 2012, KCI Auto Auction and KCI Cares have donated over $325,000 to CASA,” Blumel said. “KCI Auto Auction’s contribution of time, talent and money has had a tremendous and lasting impact on CASA and our ability to serve more kids.”

KCI Auto Auction and KCI Cares are the single largest business supporters for Blumel’s organization and her team of more than 350 volunteers.

But in Doll’s view, the charities are “the true heroes that actually do the work and are involved every day,” he said. “We’ve been very blessed, our business has been blessed and our teammates have been blessed.”

Doll wants to remain humble while growing into the future—a quality that his peers admire.

“Not only do they give up their treasure, but they also give up their time and talent in huge ways to CASA, to Sheffield Place, and to Camp Quality,” Blumel said.