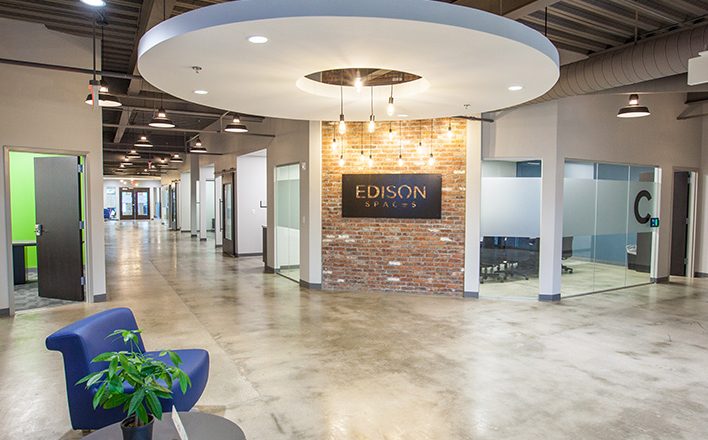 From looking at his resume, you might think that Matt Druten, cofounder of Edison Spaces, makes for a somewhat unlikely entrepreneur.

The Kansas City, Kan., native and University of Kansas graduate spent years working in the financial space, where his employers included Deloitte & Touche, American Century Investments, Atrium Doors & Windows and SPX Cooling Technologies. Those adventures led him from Kansas City to Dallas to Maine to Kansas City to Charlotte to Kansas City and hops to three foreign countries, too.

But when you dig a little deeper, you find that Druten may have the brain of an accountant, but his heart is all entrepreneur. He attributes that to following the examples set by three men:  his father, his uncle and his business partner.

Druten’s father and uncle are brothers who contribute both to Druten’s methodical, accounting side and his freer, entrepreneurial side.

“My dad is an artist, painter and sculptor,” he said. “I think he’s the most fascinating guy in the world.”

His uncle was a long-time employee of such Kansas City stalwarts as Hallmark Cards Inc. and Kansas City Southern.

“He’s always been my professional role model,” Druten said. “He has such integrity. He gave me a lot of business advice when I was in my 20s that I didn’t ‘get’ until my 30s.”

As for the influence of his business partner, Tim Barton, that’s still a work in progress.

After Druten’s last out-of-town gig, he came home and met Barton, one of the founders of FreightQuote, a third-party logistics brokerage. He was instantly taken with Barton’s free-wheeling, no-holds-barred approach to business and entrepreneurship. A partnership and long-lasting friendship began.

The two worked to build FreightQuote, where Druten became president and CFO. When the company was purchased by C.H. Robinson Worldwide Inc., Druten stayed for a bit but quickly felt hemmed in by the more corporate structure it imposed. He had lived that life and wasn’t interested in living there again.

There was a “mutual parting of the ways,” and Druten sought out Barton to discover the next step in his professional life.

“I think I always knew I was going with Tim,” he said.

The two began plotting their next moves on whiteboard – a process which continues today when they gather a team to discover where their energy needs to go next.

“We go from brainstorming to a whiteboard to launching companies,” he said. Through that process, Druten and Barton founded Edison Spaces, where Druten is CEO.

Edison Spaces came out of the early days of the process when their nascent company needed working space, but none of the existing co-working places fit the bill. The partners’ biggest complaints were that finding a business home involved signing a long-term lease at a cost that was high and didn’t include anything except the space.

The premise of Edison Spaces is that everything should be upfront when it comes to office space and should be ready on Day 1.

“Other places, you have to sign a three- to five-year lease,” he said. “Then you wait six months for furniture; then you have to negotiate and wait for cable, WiFi, etc.”

With Edison Spaces, customers are ready to go when they move in, he said. The spaces come equipped with furniture, WiFi, refrigerators and coffee makers in each office, and a fully stocked, all-included business equipment center with copier, fax, etc.

There seems to be a ramping up of the need for Kansas City and Overland Park office space, co-working and flexible spaces. Druten feels his team has Edison Spaces positioned as an industry leader and innovator.

Currently, Edison Spaces has two Kansas City area locations. There is a pilot program going in Austin and plans for a Denver location soon.

Druten’s ready to take on whatever entrepreneurial challenge he and Barton whiteboard next. They operate by a simple philosophy: “You can be more risk averse by betting on yourself.”