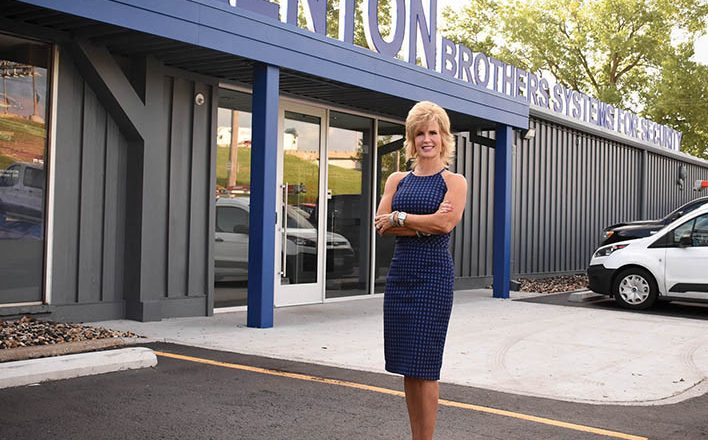 Gina Stuelke never intended to run, join or be anything other than a cheerleader for her family’s more-than-100-year-old business, Kenton Brothers Inc.

It’s not that she was opposed to the business, which began as a lock-and-key business in the late 1800s — it just wasn’t a part of her overall life plan.

“I was the first generation to go to college,” said Stuelke, “and I was ready to slay the advertising world.”

But in 1992, her grandfather, whose father and uncle were the company’s founders, asked if she’d consider joining him and her mother at the office in an official, permanent capacity. She agreed to a six-month trial, and the rest, as they say, is history.

Now, more than 25 years later, she’s overseen the company’s transition from a low-tech to high-tech security system company and a recent move into a new headquarters.

Stuelke’s entrepreneurial journey began when Kenton Brothers was still primarily a lock-and-key company. The Internet wasn’t around, there was no such thing as a smartphone, and securing a space with cameras was clunky, expensive and obvious.

Stuelke’s plan from the start was to “be in charge of change.” The speed of change accelerated with the 2008 recession. It was a time of insecurity, and Kenton Brothers wanted itself and its customers to be in a strong position moving forward.

The company’s plan included changing the types of employees it hired — moving to a stronger IT focus — and building an in-house apprentice program.

Stuelke also emphasizes the company’s culture as a point of pride and part of why it thrives some 120 years after its founding with its 40 employees.

“We have a strong culture here,” she said. “It’s the KB way. It’s really just about being good humans.”

Stuelke learned about the KB way from her grandfather and her mother, who stepped away from a day-to-day role in the company in 2006.

“My mom has been very open and welcoming of new ideas,” Stuelke said. “Really, as long as I’m healthy and OK, she is good. When we are not here, it is more of her being mom.”

How did Stuelke make the change from employee to owner? It was a process, she said — one that really continues today.

It took time and effort on her part, but eventually the team realized that she was up to the challenge and “maybe she does have some ideas, and know a little about modernizing our systems.”

Stuelke also takes comfort and a sense of stability in having a business that is Kansas City born and bred. She’s never lived anywhere else and hasn’t ever wanted to be anywhere else. When it was time for a new location, she was adamant the company stay downtown.

“We are excited about the east side,” she said. “We have lots of room to grow here.”

What advice does she have for up-and-coming entrepreneurs?

First, unsurprisingly, she advises against resting on your laurels.

Secondly, she said, “Get a mentor.”

Throughout the years, Stuelke has relied on her mother for advice but has also looked outside of the business for inspiration and help.

She is a fellow with HEMP (Helzberg Entrepreneurial Mentoring Program) and counts Barnett Helzberg, Lee Harris and Mary Lou Jacoby as friends and mentors. She’s also been in Kauffman FastTrac. The experiences are valuable, she said, because of the opportunity to meet other entrepreneurs who are in similar places with their businesses.

“The exposure is invaluable,” she said.

Lastly, she encourages fun and balance in life. She can’t fathom what retiring would be like, but she also makes sure to spend time outside of the office, enjoying life.

The new offices for Kenton Brothers are the perfect space for Stuelke and her team to continue their growth and make positive changes for their customers. With a nod to the past, there is an area of the offices dedicated to telling the story of the company, complete with life-sized cutouts of the company’s founders greeting visitors at the front door.

As she continues the company’s fourth generation of leadership, she is happy to continue looking forward and doing things the KB way, however that takes shape.

“Old ways don’t open new doors,” she said. “You have to continue learning and innovating.”