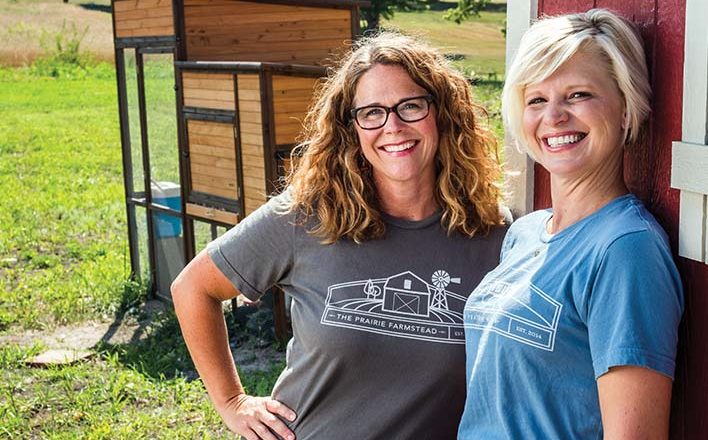 Prairie Elder Care owners Michala Gibson and Mandy Shoemaker barely blink an eye as the house dog Layla gleefully makes a break for freedom past the fence at the Johnson County group home.

Residents, family members and a visiting nurse practitioner at the dementia care facility watch with delight as Gibson tries to wrangle the Great Pyrenees. The fluffy white dog zips past the goat barn and is coated with mud before being corralled.

The crowd loves it. So do the entrepreneurs, who couldn’t have scripted the playful encounter more perfectly. 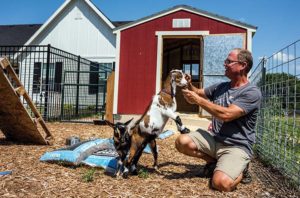 It’s provided conversation fodder and laughter for days to come. Laughter is something sorely missing from many seniors’ lives.

Since opening the business in 2014, the owners have worked purposefully to give residents and families a sense of home. The facility is as unique for its setting inside four Johnson County homes as it is for its growth: After remodeling two existing homes in south Overland Park, the business doubled its space this year with two homes built from the ground up. The third and fourth homes sit on what they call the Prairie Farmstead. It’s also home to goats, a miniature pot-bellied pig named Moe, dogs, ducks and chickens.

Families say Prairie Elder Care offers highly engaged patient care in an industry that often fails to interact meaningfully with residents at all. Patients have private bedrooms, but the center shines for its communal life. Meals are shared together at a long table, and there are two staff members to every eight patients. It allows staff time to sit down and visit with residents before tending to other chores. Families say Gibson and Shoemaker’s engaged approach is unlike any other in the region.

“No one can match it. They way they’re treating those patients—it’s a family. They’re really family to them,” says their accountant and investor Amy Goode, owner of Meridian Business Services.

The entrepreneurs, who are sisters-in-law, opened Prairie Elder Care after working as consultants in the field. Gibson, a nurse with extensive background in elder care, and Shoemaker, a former principal, were often disappointed by what they saw in a high-dollar industry. They knew they could do better. So they did.

“Our mission is giving back community, connection and control to our residents,” Shoemaker says.

It’s not just a clever turn of phrase produced by a branding expert, families say. At every turn, Prairie Elder Care has thought of ways to support that mission.

Building community and connection isn’t left to chance. The owners didn’t want residents to be sitting alone in their bedrooms, depressed.

Subtle differences set it apart. There are set times for lunch and dinner, but breakfast lingers throughout the morning so early birds and late- risers don’t have to disrupt their sleep schedules to accommodate others. Staff members don’t wear scrubs, allowing the house to feel like a home rather than an institution.

The staff learns residents’ likes and dislikes. That means stocking the pantry with Raisin Bran for one resident and Diet Ginger Ale for another so the residents didn’t have to give up one more freedom.

Offering patients more control isn’t based on independence, Shoemaker points out: “It’s based on proactively meeting their needs.”

As she’s talking, resident Martha Granstrom is sitting at the expansive kitchen table flipping through a magazine alongside Becca Elkins, a nursing assistant. The women talk and point to pictures as if they have been dear friends for years. Becca points to one picture and stops to ponder gummy bears as a possible topping for French toast.

“Would you put those on your French toast in the morning?”

The women turn to look at each other with puzzled expressions conveying their aversion to the candy.

“What about chocolate chips?” she asks as they continue the volley of conversation.

It’s a classic example of how Prairie Elder Care is different.

“When people have that control—that feeling of control—they’re able to connect with the people around them. Martha has no other needs that need to be met right now, so she’s totally connecting with Becca. And we have time to do that,” Shoemaker says.

The entrepreneurs believe that where there are connections there is also community. The animals play a big role in that, too.

“The animals not only provide connection, but they provide a common topic of conversation,” Shoemaker points out. “It gives families something to do when they visit. If you’re an animal lover, how fun to come visit your mom and play with a pig or bottle-feed goats.”

It’s important because it takes the focus off of memory loss and lightens the mood for residents and families dealing with heavy loss.

When some of the chickens turned out to be roosters, it added hilarity to conversations. Gibson points out that variety and spontaneity are needed to create a joyful life.

That’s something the group has worked hard to provide, even earning a spot in the Eden Registry, which recognizes elder care that attempts to eliminate what they call the three plagues of growing older—loneliness, helplessness and boredom. Agencies like Prairie Elder Care must prove they put the person first in their care. The business is the only agency in Kansas or Missouri with the certification.

When it came time to expand, Goode, who had been handling the accounting for years, stepped up to be an investor.

The CPA had never before invested in a client’s business. But she was confident based on the owners’ business acumen and intensely personal approach to patient care.

They were committed to high-quality patient care and rewarding staff, even if it meant earning less revenue.

“I could see how much they cared about what they were doing,” she says. “It’s not a job for them. It’s part of their makeup, their passion, who they are.”

Goode says there are other home-based environments for elder care, but they don’t encourage interaction like that at Prairie Elder Care.

“They participate in making dinner if they’re able. It’s home. It’s not a retirement center,” Goode says. “They play music from their past just for fun. And they absolutely tie their families in as much as they possibly can.”

When Goode’s daughter spent her summer break working at Prairie Elder Care, the college student was encouraged to bring her guitar and play for residents. Several residents can remember songs even when other memories slip away.

“Those are priceless situations,” Goode says.

The staff, Goode says, are encouraged to spend quality time with residents instead of hurrying to complete a to-do list.

The directive “wasn’t, ‘No, if you’re not busy you need to go do this.’ It was, ‘Spend time with them,’” Goode says. “Be there for them, care for them. Be part of their life.”

Granstrom’s daughter, Diane Conner, previously spent nearly every waking hour—and many sleepless nights—worrying about her mother. She lived at a highly respected senior facility, but it didn’t have the staffing to meet her mother’s needs or adequately protect her from a male patient who regularly made sexual advances, Conner says.

Conner spent considerable time at the facility, installed cameras in her mother’s room and hired additional 12-hour care so her mother would be safe. There were many caring staff members, she says, but the staffing ratios of 1 to 20 were too great. Conner often pitched in when staff didn’t show up. Conner regularly trained employees in her mother’s catheter care.

“All they could do is get people to the table and get food on the table,” she says. “Not sit there and visit with them.”

After Granstrom moved to Prairie Elder Care, Conner realized the enormity of the physical and emotional burden she had been carrying.

She can come to Prairie Elder Care and have a cup of coffee with her mom.

“I can be more of a daughter than a caregiver with my mother,” Conner says.

Conner is actually spending less money on care at Prairie Elder Care, where a visiting nurse practitioner takes care of her medical needs, a visiting masseuse provides massages and she can get her hair fixed on site.

“The amount of money you make on one house is not enough to support two families,” Gibson says. “So it wasn’t an option to not grow. Especially because you’re tied 24/7 to it anyway. So we found another house, made an offer.”

Then the bottom dropped. Three of the facility’s eight residents died. It was one of their biggest lessons to date. 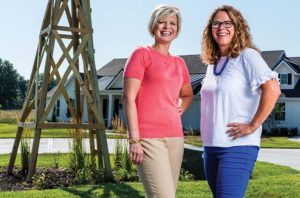 “I had not learned how to market or sell something that wasn’t readily available,” Shoemaker says.

The wait list was useless because everyone had found other accommodations. It could have bankrupted the owners, but they managed to pivot.

“We started taking a $500 deposit to be on the wait list, which was refundable if we didn’t have a room available in time,” Shoemaker says. “But then we knew that they were going somewhere else because we had to give them back their money.”

They also redoubled their marketing efforts.

“I think the main thing we learned during that is you can never stop marketing and selling,” Shoemaker says.

Business revenue will always be capped because they are limited on rooms. So they had to think deeply about how they stand out among their competitors.

Patient families helped them define their best asset: It was their hands-on approach that set the tone for everything else.

“How can I sell something I don’t have? Well, then you still need to sell yourself,” Shoemaker says. “I do think a lot of people come to Prairie Elder Care because of us. Because they know that we’re involved.”

At larger facilities, key staff members can leave at any time because they aren’t owners.

“We have to continue to sell ourselves and the Prairie Elder Care brand much more effectively and not just the idea of selling rooms,” Shoemaker says.

The approach has worked. The two managed to fill the third house quickly and open the fourth during what is typically their slowest time. They have space to add a fifth home at the farmstead when the time is right.

Another major challenge is staffing. Gibson’s experience allowed her to anticipate that staffing would pose a constant hurdle. It still didn’t make it any easier for the small business, which demands more from its employees. Certified nursing assistants are expected to cook, clean and spend quality time with residents.

The women admit that not every employee is cut out for Gibson and Shoemaker’s hands-on style. But they reward their employees with better-than-average pay and benefits that stand out.

Growth and holding steady is the next big challenge. Don’t expect to see a Prairie Elder Care franchise anytime soon, the women say. They won’t become a conglomerate.

Instead, the women are writing a book about their engagement model that is expected to publish this winter. The book will offer examples of how they created community and gave residents more control.

They also will launch a speaking tour and workshops aimed at helping families and others in the industry.

The two hope it will provide the means to hire an executive director, who can help lessen their round-the-clock role at the four homes. It will take time to find the right person who understands and carries out their philosophy. Even then they still will be present at every turn.

If anyone can do it, it will be Gibson and Shoemaker, Conner says.

Conner is amazed at how peaceful her mother seems these days under their care.

“She tells people, ‘Look at my backyard,’” Conner says. “My mom says if you can’t live on your own, this is the best place to be.”