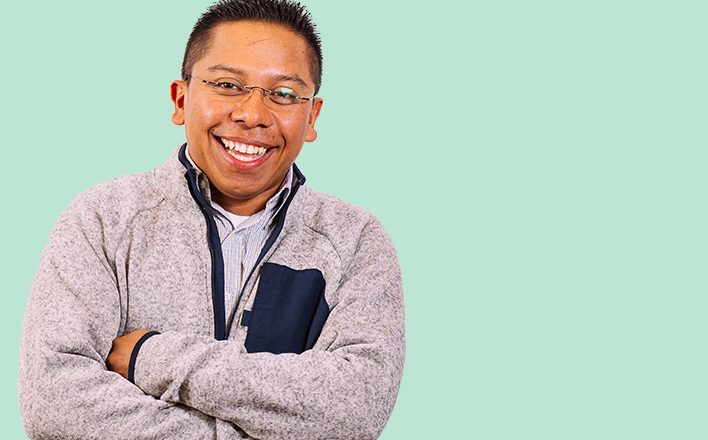 When Alex Nuñez decided to start his own tile company, he didn’t spend a lot of time charting strategic goals and fine- tuning branding.

Back then, he didn’t know what branding meant. Goals, he reasoned, would come naturally. After 14 years in the business and a stellar reputation for high-quality craftsmanship, he just consulted a banker for business advice and printed business cards for Nuñez Marble & Tile LLC.

Then Nuñez went to work the next day, placing tile for customers. And it worked. Today, he employs six people at his Kansas City business and has a service waiting list through August.

But after a strong run of business fortune, Nuñez realized it’s never too late to reshape his business plan. The 38-year-old got a big break when he was selected to participate in ScaleUP! Kansas City, a program designed for growing small businesses.

Nuñez is among a premier group of entrepreneurs chosen to participate in the free course. It’s offered by the University of Missouri-Kansas City Innovation Center and the U.S. Small Business Administration. Participants have been in business at least two years, generate $150,000 to $500,000 in revenue and are in a market capable of supporting more than $1 million in sales.

Nuñez said the class has already drastically changed how he conducts business. He plans to shake up everything from the company’s social media accounts to his hiring targets and accounting practices.

‘You Have to Do the Right Thing’

ScaleUP! Kansas City taught Nuñez that branding is essential if he wants his small business to stand out. Branding wasn’t even on his radar a few months ago.

“I didn’t even have a clue what branding was,” he admits.

But when a ScaleUP! presenter started to explain how major corporations like McDonald’s have thrived with marketing, Nuñez immediately realized why it was essential for him, too.

It didn’t take him long to figure out his brand. Nuñez has spent his entire career trying to surpass his customers’ expectations, so he made that his brand.

Nuñez’s reputation was already the underpinning of his business. Customers pay extra for his work, he said, because they know it’s right.

“I like to do high quality, and I like to do work the right way,” he said. “A lot of people are looking for quality. Somebody that is going to say, yes, I’ll do it and I’ll do it right.”

Nuñez launched his business in 2013. After Nuñez’s knees started to give out, his old employer wanted to give Nuñez a superintendent job making $30,000 less per year.

“It was very rough because I worked for somebody for almost 14 years, and then after my body wasn’t doing well, then they wanted to take advantage of me,” he said.

“It’s time for me to step up and prove that I can do it,” he decided.

Some of his classmates at ScaleUP! Kansas City spent years planning every financial detail of their business. He had one day.

Nuñez eventually wants to pass the business on to his children.

In order to do that, he knows he must better analyze his finances. As a result of participating in ScaleUP! Kansas City, he’s hired a new accountant. He set financial goals for sales that will drive management decisions for hiring.

“That’s going to be very helpful for me as I grow,” Nuñez said.

He also has changed his hiring process. Before ScaleUP! Kansas City, Nuñez had planned to wait about two years before hiring a project manager to give estimates. But he’s changed his mind.

“I know I’m already there,” he said. “I need that person right there already.”

Customers can expect many changes ahead for Nuñez Marble & Tile. But there’s one thing—high-quality work—that won’t change.

“When someone says Alex Nuñez tile,” he said, “they expect the best.”