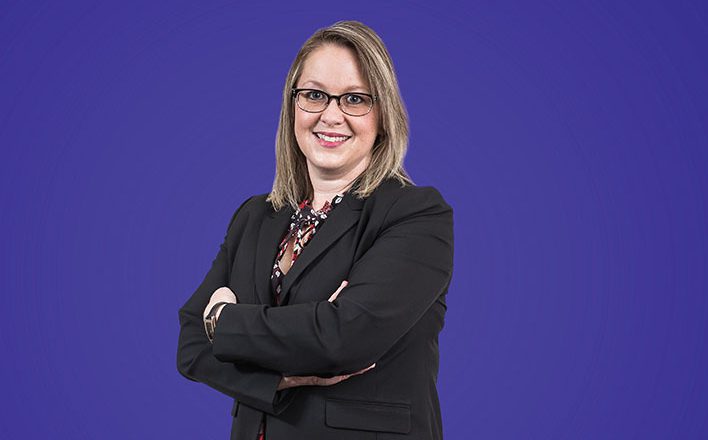 The business has always been well-regarded for its high-quality, professionally-trained security guards that worked well with law enforcement. That’s in part because Simmons Security was founded with a mission to improve the level of security guard services offered in the community by her husband, John Turner, and brother-in-law, Michael Simmons — who have deep roots in law enforcement.

“We felt like after being in business for 10 years, we just weren’t getting over that hump,” she says.

When a business coach suggested ScaleUP! Kansas City, Turner knew it could be the push they needed to scale.

ScaleUp! KC is a free program offered by the University of Missouri-Kansas City Innovation Center with support from the Ewing Marion Kauffman Foundation. The program includes classes, peer mentoring, professional guidance and more. It’s open to small businesses like Simmons Security & Protection Services who operate in a market capable of supporting more than $1 million in annual sales and who want to rapidly grow their business.

Turner often left classes with an arsenal of clear direction to move her company forward. But even with the intense pace of the course, Turner felt assured that the strategies would work and be a turning point for the business.

“It really allowed me to dig deep in our business and really analyze numbers,” she says.

Almost immediately Turner realized that she needed to thoroughly understand her financials. It went beyond looking at a financial statement, she says. Turner needed to understand every detail but especially the profit margins.

There were days when Turner’s ScaleUP! coach pushed her beyond her comfort zone, but it was necessary in order to move the business forward.

“She will challenge you to the extent of your soul,” Turner says, laughing.

Turner trusted the coach and knew she offered solid insight about scaling.

“They really helped and they were there to answer questions,” Turner says.

Studying her financials helped Turner determine an ideal customer. It also helped the owners decide which customers were costing them too much money.

Turner used to jump when someone called and asked, “Can you have a guard at my place by 5 p.m. today?”

It forced Turner to wipe the day clean to prepare for that one new client, who might never call again. Just preparing the proper paperwork took hours out of the day for the entrepreneur. ScaleUP! coaches questioned if the profit margin was the right fit for the business. How could Simmons Security scale and continue to serve customers that didn’t produce long-term revenue?

Since ScaleUP!, Turner has turned down those one-and-done clients.

“It just simply isn’t profitable for us,” she says.

Instead, ScaleUP! experts convinced Turner to think about new markets. What else did clients need? What need wasn’t being met?

Turner created an entire strategy to offer new services that will ultimately increase the business’ profit margins. She’s keeping some of that quiet for now until the company launches new services in mid-2019. But she says the company expects to offer background checks as part of that plan.

“Not only because financially it makes sense, but also because we’re listening to our clients and hearing what they’re asking for,” she says.

Simmons is also building strategic partnerships with other businesses as the business scales to provide additional services to clients.

Sometimes ScaleUP! experts surprised Turner, including when they urged her to think about borrowing money from a bank. Until recently, the owners alone had funded the business.

“We learned that getting over that hump means you have to take some risk and that borrowing money isn’t a bad thing,” she says. “It’s not a negative. It doesn’t show a weakness or anything. It’s just that sometimes to get where you’re going you have to borrow some money and have some debt.”

Since ScaleUP!, the company took out a loan to purchase a marked vehicle – the company’s first.

Turner is more confident with the decision once ScaleUP! experts showed her how to project revenue and strategize.

The class also taught Turner how to delegate the work. The business employs about 35 people. About two-thirds of those employees are off-duty, sworn law enforcement officers working about one shift a week. She also employs five full-time employees.

After ScaleUP!, Turner realized she needed more team meetings with her full-time employees to make sure everyone understood the business goals and their roles in that effort. Turner also began to delegate more work so she could focus on growing the business.

She promoted a longtime employee, Abraham Santana, to site supervisor to oversee employees. He’s welcomed the changes, especially the team meetings to keep everyone focused and directed for the overall good of the company.

“It just puts us all in the same place,” he says. “It gives us perspective.”

‘It was worth it’

One of the highlights for Turner was the entrepreneurial connections she made through ScaleUP! The program allowed her to sit down every week and learn from other entrepreneurs going through similar challenges. They used peer-to-peer roundtable discussions to help solve problems.

“Everybody there had committed to working on their business,” she says.

When Turner was struggling with the proper way to send confidential information using technology, another entrepreneur was not only familiar with the dilemma but also able to help solve it.

“I feel like I made some friendships that are going to benefit me over time,” she says.

Turners says ScaleUP! wasn’t one of those leadership courses where she found herself filing paperwork never to be used again.

“The time that I committed to it really felt that it was worth it,” she says. “ScaleUP! gave us more confidence to do things we knew we needed to do.”