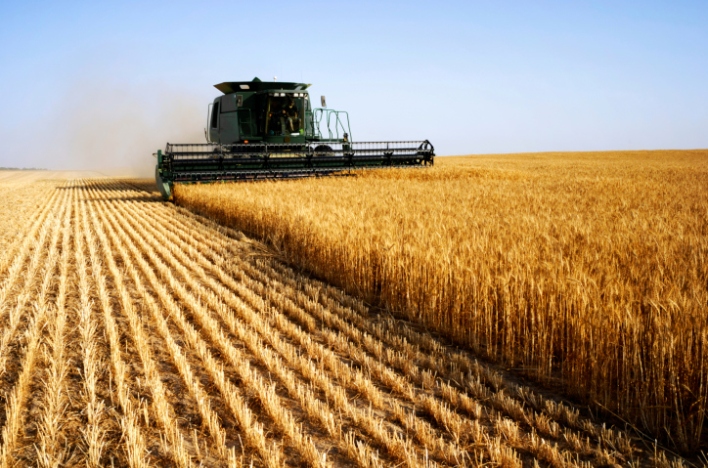 The agriculture industry—and by extension, the world—is facing a massive challenge in the coming decades: Global food demand is expected to increase by an astounding 70 percent by 2050.

It’s a problem that’s as big as the planet Earth. But when the solution comes, don’t be surprised if Midwestern companies helped develop it.

“This is a very significant new sector of the economy with a tremendous upside in terms of both firm creation and job creation,” said Suren G. Dutia, a Kauffman Foundation senior fellow and the author of a recent study on the topic.

Meeting the increased demand for food won’t be easy. Unlike the first Green Revolution from the 1940s to the 1960s—when enhanced agricultural production saved 1 billion lives by utilizing additional farmland, fresh water and fertilizer—the coming revolution will be waged with limited resources that must achieve a sustainable outcome without harming the environment.

“There’s no more land that we should or can put into production,” said Sam Fiorello, COO and senior vice president for administration at the Donald Danforth Plant Science Center in St. Louis. “We don’t want to continue the deforestation. We don’t have that luxury.

“I wish we had a hundred more Jasons,” Dutia said. “Entrepreneurs like Jason are problem solvers. When they see a real-world problem, they have the ability to think outside the box and apply technology to solve it in such a way that it makes a huge impact.”

Farmobile has developed a system that integrates its own hardware with the standard diagnostic board in the cab of a modern farm tractor. The system gathers pinpoint planting data and stockpiles it in an electronic farm record (EFR) that’s easily accessible to the farmer.

“It’s like a black box for farm equipment,” Tatge said. “As we get more accurate records, we are going to learn how to put more seeds in fertile ground and less seeds in infertile ground, which will boost yield.”

The data is owned by the farmer, who can share it with other enterprises on a data exchange for a fee that will be split 50-50 with Farmobile.

“The farmer has the ultimate say, ‘Yes, I want to sell my data for $1.50 or $2.50 an acre’ or ‘No, I don’t,’” Tatge said. “We’re trying to get all of this data in one place to allow multiple companies to compete and offer farmers solutions for the best ways that they believe farmers can optimize their yield.”

“Applying microorganisms to agriculture is a very important missing link,” said SCD Probiotics founder and CEO Matt Wood. “Agriculture has been focused on chemistry for the last 60 or 70 years in how we grow plants and manage fertility. And we’ve really overlooked biology.”

“That’s the fastest growth we’ve seen so far with that product line,” Wood said. “It doesn’t come as a surprise. There’s just more and more adoption.

“Farmers may first experiment on one acre, then 10 acres, then 100 acres. Customers who started in a small way three years ago are going to continue using more as they see the benefits of the products.”

To foster more companies like Farmobile and SCD Probiotics, though, Kansas City and the Midwest as a whole need to create the right conditions for ag innovation to thrive. The good news is that we actually have a lot of advantages in this area.

“It’s an ideal example of a region that is poised to make strides because of a wide range of assets that we have,” Dutia said.

Cargill, Monsanto, Bayer HealthCare, Archer Daniels Midland, John Deere—some of the largest players in this sector have headquarters and research facilities in the Midwest.

“We are among the largest agricultural producers, and we have the distribution system to railways, waterways and highways,” Dutia said. “We have the processing capabilities. And, most importantly, we have the human capital because of access to land-grant universities.”

Kansas State University, the University of Missouri and other schools train the person-nel that power big and small ag companies. The schools also support the development of innovative technologies.

Thanks to its Applied Aviation Research Center, K-State has become a national leader in unmanned aerial systems (UAS)—drones. While best known for military use, this technology could help farmers more accurately survey their fields and spot infestations and other problems, leading to higher crop yields.

The Association for Unmanned Vehicle Systems International believes UAS technology could create 70,000 new jobs and
generate $13.6 billion by 2018.
In Kansas, that would mean 2,515 new jobs and $489 million in economic impact.

In 2022, the $1 billion National Bio and Agro-Defense Facility (NBAF) is expected to start operations in Manhattan. NBAF will not only lead the way in studying threats to animal and plant health, it also will attract highly skilled researchers to the area.

That human capital is important because researchers often develop ideas that can be turned into the next great invention.

For example, consider Peter Scharf. He’s a University of Missouri-Columbia professor who has devised a way to fight nitrogen loss in corn crops.

How does Scharf’s creation, NVision, work?

NVision then creates a map that guides a fertilizer applicator. Extra nitrogen is placed exactly where it needs to go.

“I envision a farmer walking into a cornfield and placing an order on their GPS-enabled phone, and the aerial picture of the field would be delivered back to the phone,” Scharf said. “We have the knowledge.”

WHAT NEEDS TO CHANGE?

Despite all of the Midwest’s strengths, the rest of the country doesn’t really view this region as a hub of innovation the way they do San Francisco and Boston, Dutia said.

Even locally, the ag sector has suffered a loss of visibility as major institutions such as the Kansas City Stockyards and the Kansas City Board of Trade have faded away.

So how can the Kansas City region position itself as a hotbed of AgTech?

Entrepreneurs, investors and policymakers need to be educated about the opportunities in AgTech, Dutia wrote in his study. There should be a greater focus on innovation and collaboration.

“This is really the secret sauce behind the success of Silicon Valley,” Dutia said.

Local universities’ ag programs must focus their training so that it addresses the need to produce more food with fewer resources, Dutia said. The region also should market its ag assets—its research universities, its existing ag companies, its prodigious food production—to the larger world.

And regional organizations need to work together to build networks that encourage innovation and collaboration.

You can already see signs of progress on that end.

The KC Animal Health Corridor, a project under the Kansas City Area Development Council’s umbrella, hosts an investment forum for early and mid-stage companies, lobbies for major projects like NBAF and generally promotes this region as a great place for ag companies to do business.

“Just like Silicon Valley has been able to do it in the area of IT,” Dutia said, “the heartland can be a significant force to be reckoned with in the area of AgTech.”