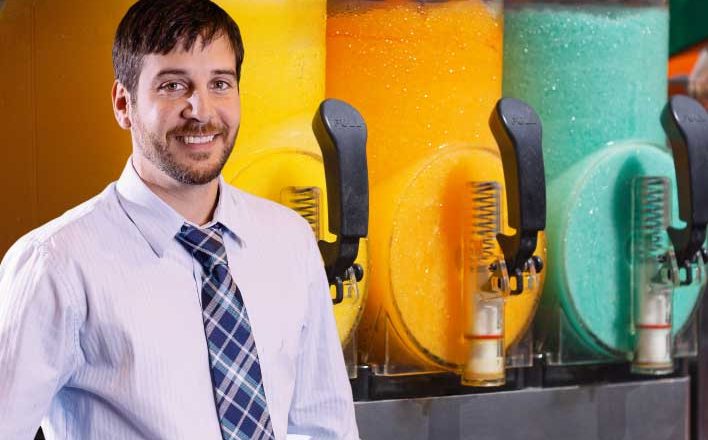 But he quickly realized that his products’ high levels of high-fructose corn syrup were a nonstarter for many customers.

Einsel knew that if Thirsty Coconut was going to succeed, he needed to offer healthy drinks and products to give nutrition-conscious consumers a choice. The result? The Thirsty Coconut has grown into untapped markets and increased sales by a whopping 300 percent for two consecutive years. That’s just the beginning.

With the help of ScaleUP! Kansas City, Thirsty Coconut is on course to become a nationwide vendor for healthy beverage distribution. After graduating from the program, Einsel has confidently added employees, expanded his facilities, strengthened his financials and set the groundwork for long-term financial success.

“I want to be a nationwide company,” Einsel said. “I think we have a great product.”

ScaleUP! Kansas City is designed for businesses that want to grow. The free program, which is offered by the UMKC Innovation Center and U.S. Small Business Administration, offers classes, peer mentoring, professional guidance and more. It’s open to businesses operating in a market capable of supporting more than $1 million in sales.

Lay the Groundwork for Growth

He had big goals for bringing on more customers, but ScaleUP! consultants asked him if he had the people and the facilities to do it right.

It led Einsel to move into a bigger facility this year. Thirsty Coconut relocated from Olathe to a former Chris Cakes building in Louisburg.

Infrastructure includes adding critical employees, too. Einsel is the first to admit that the family-run business, which he founded in 2012 and owns with brothers Darin and Garth Einsel, was having growing pains. ScaleUP! reminded him that he couldn’t go it alone anymore.

Scott Taddiken, an area attorney, is serving as an adviser and a minority owner. Einsel also designated his brother Garth to be the operations manager. It means others can make decisions without waiting for one person to sign off on every move.

Thirsty Coconut, which serves a five-state region, has earned a reputation for its rapid service calls. While competitors take weeks to repair equipment, the family-run business responds within 24 to 48 hours.

“I can beat the three-week service call,” Einsel said, laughing.

‘Who Do You Want to Work With?’

As Thirsty Coconut built its reputation, Einsel and his family were out making cold calls on customers. Their big break came when an associate suggested they hit up a new market: “Why don’t you try a school district?”

“Schools are our biggest client by far,” he said.

Einsel reached out to the Kansas City Kansas School District and offered to let them try Thirsty Coconut’s 100 percent juice slush. Teenagers loved it. The district did, too, because it’s a healthy product that meets federal school standards for calories and nutrition.

“We’re replacing Coca-Cola at a school district,” he said.

Thirsty Coconut leaves the machine at schools free of charge, but makes money from selling the beverage mix. Einsel keeps prices low so cash-starved schools can bring in revenue to boot. When a machine needs service, Einsel and repair technicians jump into action.

As great as Thirsty Coconut’s business was going, ScaleUP! advisers showed Einsel how it might get even better, all by asking one small but pivotal question.

“They said: Who do you want to work with?”

It prompted Einsel to contact a national food service management company that is in charge of school nutrition programs for hundreds of districts.

“We want to be a healthy beverage distribution company where we only focus on products that are replacing high-fructose corn syrup,” he said.

‘I Want to Be a Nationwide Company’

Thirsty Coconut’s next big challenge is finding investors to take the business beyond the five-state region it currently serves.

“If we can replicate that, it’s pretty easy to see us being nationwide at some point in the near future,” Einsel said.

He credits ScaleUP! for helping Thirsty Coconut continue to grow. The program consultants don’t hold your hand through the process, he points out. However, they do push you to open your mind to new markets and ideas.

“They get the gears going,” he said. “You try to get in there and think about your business in a different light.”