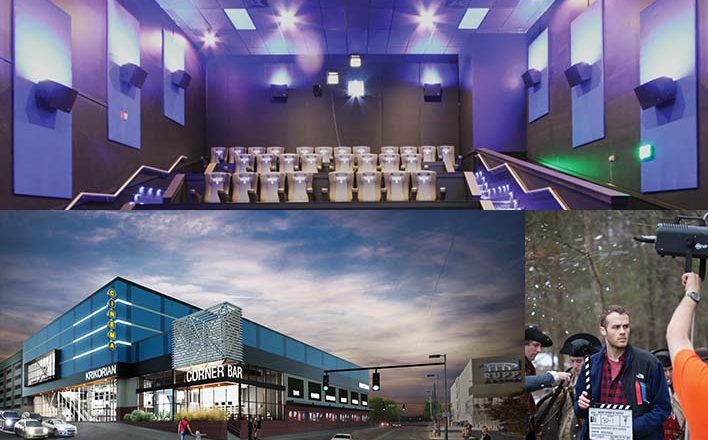 There was a time not so long ago when moviegoers, like critics, might have offered a simple thumbs up—or down—based solely on their opinion of a film.

No more. Today, the movie theater experience and customer satisfaction are about more than just the product on the screen.

A few local companies are intimately familiar with the demands of movie-goers. Halfway across the country from Hollywood, Kansas City’s movie-industry businesses are keeping tabs on cinematic trends.

For movie-goers, size matters—when it comes to the screen, that is. There’s also the quality of a movie’s picture and sound, the comfort of the chairs, the variety of food and drink choices, where the refreshments are served and the amenities that one might enjoy before a movie even starts.

“Movie theaters must create the setting for social experience in the same way that the best restaurants and bars do,” said Mike Cummings, senior principal for TK Architects International, a Kansas City, Mo., firm. “Superior technology and presentation are a must. The movie-going experience has to remain an event of shared social experience, built around the art of storytelling that has been part of the human experience since our ancestors gathered around the campfire.”

Take, for example, TK’s Malco Theatres Inc. project in Memphis, Tenn. A historic building on the grounds of an old train station was transformed into a restaurant, bar and lobby. New construction added seven theaters. The project is part of a larger 17-acre, $53 million redevelopment that will add apartments and a hotel to the Memphis downtown.

Meanwhile, in Lexington, Ky., TK is working with Krikorian Premiere Theatres on a 90,000-square-foot facility near the University of Kentucky’s Rupp Arena that will include 12 theaters with in-seat dining, a sports bar, restaurant, food court, a 16-lane bowling alley and laser tag arenas.

“Movie-going has always been a shared social experience,” Cummings said. “I think in many ways that millennials consider the experience part, shared with their friends, the most important reason for going to the theater. I believe the key is to create spaces where people want to hang out while they are not watching a movie.”

Cummings’ firm has been designing theaters since 1981, but the business has changed drastically in the past two decades. Renovation picked up around the start of the new century as theaters converted from film to digital cinemas. Investment in the industry continued as operators began installing bigger screens and better sound systems, he said.

Those investments have been big for TK’s business. Its cinema work has grown at least 50 percent since 2012, Cummings said.

‘The Consumer has Voted’

“It seems like the consumer has voted, and they strongly prefer this model,” he said.

Gladstone-based B&B Theatres has 11 locations in the metro area. The company, which is building a theater complex and new corporate office in Liberty, has updated theaters locally in Shawnee and Lee’s Summit with recliners, reserved seating and enhanced menu options.

Paul Farnsworth, director of public relations for B&B, said that upgrading a typical auditorium-style theater with recliners reduces seating capacity by up to 60 percent. However, he said the improved sightlines and enhanced experience have proven to be a huge draw.

“Without sharing proprietary data, we can safely say that remodeled locations not only bring guests to the movies more often but bring people back to the movies that may not have been for quite a long time,” he said.

Cummings said it might seem counter-intuitive to reduce capacity while attempting to increase attendance. However, he said that on average, a traditional cinema only sells 20 percent to 25 percent of available seats per week.

“Usage is much heavier on weekends, but much of their capacity was sitting idle,” he said. “The first locations to convert were seeing a net increase in revenue of 30 to 40 percent.

“Part of the increase is food and beverage sales, particularly where enhanced choices are available. Ticket prices are not generally
increased, or if they are, the increase is nominal.”

Farnsworth said many movie theaters have responded to the increased attendance in smaller-capacity theaters by moving to reserved seat ticketing.

B&B is drawing customers by selling more than just tickets. The family-owned chain’s Shawnee location features a theater for live events, and the Shawnee and Lee’s Summit locations both feature theaters with playgrounds for children to enjoy prior to showtimes. Like TK Architects’ Kentucky project, B&B is building a theater with a bowling alley and arcade in Ankeny, Iowa, that is expected to be completed this fall.

Farnsworth said theaters have to offer more than just movies and popcorn to compete with new technology.

“The entertainment landscape has evolved drastically over the last decade with the advent of on-demand streaming services, high-end audio and video capabilities in the home, a world of information and gaming at our fingertips, and so much more,” he said.

In what seems to be an ever-changing environment, the next evolution in cinema could be four-dimensional films.

Cummings said 4D, which adds things like scent, motion and wind to the theater experience, is popular in Latin America and Asia and is growing in popularity in the United States. He said equipment costs are at least $500,000 more per theater than a traditional cinema auditorium.

“It is really a blast,” said Farnsworth, who noted that thriller and horror films are especially popular in 4D.

The 4D format creates interesting challenges for local filmmakers. Wide Awake Films, a Kansas City, Mo., company, recently collaborated on Revolutionary War 4-D Experience for Mount Vernon, the Virginia tourist attraction and historical site that was home to George and Martha Washington. The film is one of two projects involving Wide Awake that is shown daily at Mount Vernon.

“It was a lot of fun,” said Wide Awake founder Shane Seley, who also is a producer and director. “There is a scene where Washington is crossing the Delaware, and we built up to that moment. But we had to take a different approach knowing that it’s going to snow on patrons in the theater. They’re going to look up and not be looking at the screen, so in the pacing and timing of the scene, we have to make sure we don’t leave them behind.”

Wide Awake produced the on-screen content for the film while working with other vendors who helped create other sensory effects. The company has been making documentaries, as well as web content and videos for conferences and conventions for clients like John Deere, Sprint and the Kauffman Foundation since 1999, but this was the company’s first foray into 4D.

One challenge the filmmakers didn’t tackle for the Mount Vernon project was scent. Seley said the film offered plenty of opportunities—smoke, gunpowder and horse manure—to incorporate the technology, but there were considerations related to how to clear those smells within a 200-seat arena between each of the scenes in the movie.

Seley, a self-described history nerd, said he would love to do more 4D films.