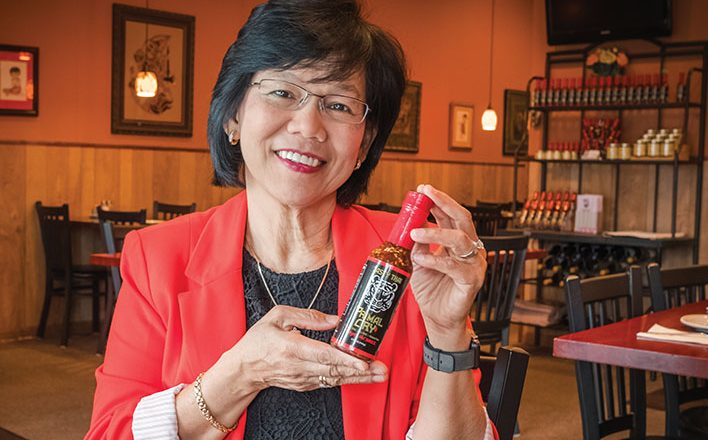 And Marisa Wiruhayarn of Tasty Thai has learned to tell it well.

Marisa Wiruhayarn’s story is one of perseverance, of learning how to believe in herself, of realizing just how capable she is. Her entrepreneurial journey began in the early 1980s when she left Thailand full of excitement for a fresh start in the United States.

Then her husband died unexpectedly, leaving her to raise two children, with a limited grasp of English and no real job skills. Today, she co-owns three successful Thai restaurants:  Tasty Thai and Big Bowl Pho. And recently, she began bottling and selling Primal Cry hot sauces based on old family recipes.

A Knock at the Door

Marisa says her life changed in the middle of the night in October 1986 when she awoke to a knock at the door. A police officer delivered the devastating news that her husband had died.

In the midst of her grief, Marisa realized she needed to take action. She still spoke little English, had no family except her mother- and father-in-law and her two children. She took a job sacking groceries for $3.50 an hour but quickly realized that a low-wage job would not be enough to support her children. Her father-in-law asked her what she wanted to do with her life.

“I told him I wanted to go to school so I could have a better life for the children. He said, ‘okay.’ The good thing was he never told me I couldn’t do it,” Marisa said.

Urgency for an Education

Marisa told her father-in-law when she started, “If I’m even lucky to get my degree in four years, I’ll be 31 years old. I will be so old. He asked me, ‘Do you want to be 31 years old with a degree or without a degree?’”

But Marisa was in a hurry. Before she even finished the GED program, she applied to Maple Woods Community College.

“I needed to keep going. I needed to graduate in four years. That sounded undoable at the time, but I did it,” she said.

Eventually, Marisa graduated with a degree in accounting from Rockhurst University, landed a job at State Street, and later worked at the City of Kansas City as an internal auditor. She worked her way up to manager by the time she left.

In 2000, while she was still at the city, she started planning with her new husband to open a restaurant, working evenings and weekends doing its bookkeeping. They kept overhead low and were able to open additional locations. Then Marisa started a business of her own, M-Power Enterprises, bottling the sauces, which are sold in Hy-Vee, Price Chopper, Hen House, Green Acres and other stores.

“It’s so much fun when you own your own business,” Marisa said. “You get to be very creative. I made the sauce and I think maybe I need to share this, and how do I do that?”

Marisa packed up some bottles, drove to a Hy-Vee and asked for the manager. He liked her product and offered to place some in the store.

Excited about making her first sale to Hy-Vee, Marisa said, “I almost fly from the store singing and dancing, but by the time I got to my car, I was saying to myself, “Who’s going to buy my sauce? I can put my sauce on the shelf, but who’s going to buy it?”

Like so many other times throughout her journey, Marisa faced the new challenge head on. To make sure her sauce moved, she began doing a lot of demos. She began to approach other grocers too.

“I learned not every store was like Hy-Vee, and I needed to go through headquarters. But I thought, I’ve come this far, what do I have to lose? Why not go a little bit further?” she said.

More stores began placing her sauces, and customers continued to purchase them.

She also met Morgan Perry, who is with the Mid-Continent Public Library’s Square One program. Perry introduced Marisa to 1 Million Cups and told her, “Marisa, tell your story.”

Marisa said that’s when the big break came for her and her sauces. Her network began to grow.

Marisa’s advice to others?

“Let people know who you are, what you need and what you offer,” she said. “When you pitch them, believe in your product and believe in yourself. I used to be so afraid and shy about everything. I didn’t even know the potential I had until I put myself into it.”