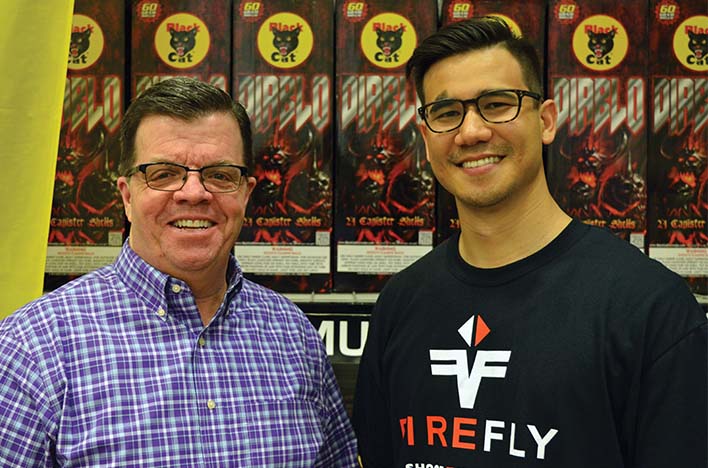 According to Mike Collar, the fireworks business “gets in your blood.”

Mike’s brothers John and David got into the industry as teenagers, working at a stand in Pittsburg. In 1979, they incorporated as Winco Fireworks.

Today, the company, with headquarters in Prairie Village, is a multimillion dollar business that sells its products in more than 40 states. Winco has 300 full-time employees and adds 2,000 seasonal workers in summertime.

Mike Collar, who runs Winco’s day-to-day operations as president and COO, said he grew up in the business that his older brothers started. He worked at the stands part-time in summers and on breaks for years.

The brothers work well together because they all respect each other’s roles, Collar said. And that’s not his only family he sees at work—his sister, sister-in-law, nieces and nephews work at Winco. So does his wife, Theresa Collar, who is director of imports.

“We work together and commute together, and we’re still married,” Mike Collar joked.

Even the fireworks industry is like a family, Collar said. There’s a small core of wholesale fireworks distributors like Winco, so everyone in the business knows each other, he said, and many customers are mom-and-pop shops.

What’s challenging about the fireworks business, Collar said, is its short season.

For most of the country, prime time for fireworks is May through July; in southern states, there’s also a winter season around the holidays.

Being ready for a short season means planning ahead is crucial, Collar said. And, unlike distributors in other industries, Winco stockpiles supplies.

“There’s no way you can do just-in-time,” he said. “You’ve got issues with production, issues with transportation—you could have a strike on the coast, and we’ve all seen that happen. So, consequently, we have to bring product in as early as we possibly can.”

But even when the products arrive in time, there’s another factor that can upend Winco’s careful planning: the weather.

In 2012, drought affected about 65 percent of Winco’s territory, he said. Some of its customers couldn’t pay because they couldn’t sell the products. That prompted Winco to become more proactive.

Now, the company works with Weather 2020—founded by meteorologists Gary Lezak and Jeff Penner—to get extended forecasts nationwide. Winco can use the weather data to counsel customers in drought-prone areas to adjust orders.

Even though Winco’s success relies on nearly ancient technology—fireworks have been around for thousands of years—it’s not resting there.

Winco has partnered with Kevin Wu to provide a new product that fuses fireworks—many of which are still made by hand, Collar pointed out—and mobile technology.

Wu, who is from Hong Kong, said his family’s history in the industry goes back to the 1800s. But the millennial inventor (who said he was not a fan of fireworks, despite growing up with them), saw an opportunity to innovate.

FireFly allows the home enthusiast to create a fireworks show that can even be set to music through a mobile app. The device is a square box with the ability to plug in wires that remotely light the fuses of various fireworks.

In addition to bringing an age-old product into the 21st century, Collar sees incredible value in the FireFly from a safety perspective. He’s involved in industry associations that are “working to make things safer and better,” and FireFly fits that to a tee, Collar said.

“We consider our company very innovative … so this is right up our alley. But the biggest thing was we thought this is going to revolutionize the industry,” he said. “It’s not going to happen overnight. There’s that legacy to overcome, and it will take some years to get that happening, but the buzz on this product is big time, and it’s just going to make a safer firework.

“I think this really promotes safety, and that’s what excites us about it.”