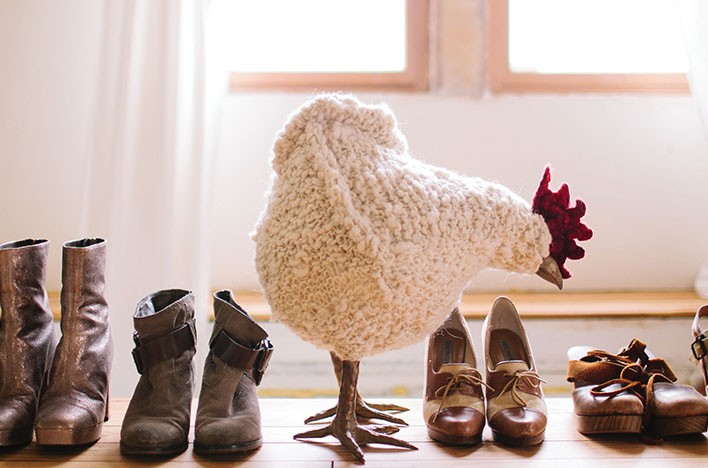 They are just some of the “chicks” hanging out in the coop of The City Girl Farm, a Kansas City business. These chicks are the creation of Sally Linville and her team of artisans.

These unique chicken footstools are made by hand from fiber, wood and bronze. Each chick is a one-of-a-kind functional piece of art with its own posture and personality. Linville is a co-owner with Jon Hubbard in the business.

Linville’s fondness for chickens goes back to her youth.

“I was raised on a third-generation farm in central Kansas in Lyons,” Linville said.  “I grew up with chickens, and I had happy childhood chicken experiences.”

Linville’s mother worked with fiber using a loom, and she would watch as her mom created various projects. That love of fiber and fabric influenced Linville’s path in college at Kansas State University, where she was able to weave her passion into her degree program of interior architecture and product design.

It was during her workshop component that Linville designed and built furniture, “and that’s where the chicken idea was hatched,” she said. “I was inspired by a sheep ottoman designed by Claude and Francois-Xavier Lalanne. I always loved those. They used wool and they used bronze on them.”

A coop of artisans

After college, Linville took the time to learn the processes involved and began creating her first chicken stools in 2010.

“I asked myself what design features needed to be there to tell it’s a chicken, and how it would stand with two legs.”

Over time, Linville refined her systems for creating the chicks – the process involves numerous artisans. By 2017, Linville and Hubbard teamed up, formed a limited liability corporation and were into the chicken ottoman business.

Each chicken is made of several parts including wood, bronze, wool and upholstery fiber, all sourced in the United States. It is a multistep process with many loving hands creating each chicken.

“The feet and beaks are cast in bronze. I did the original sculpture and created a mold, and Ad Astra Art Bronze outside of Lawrence cast them,” Linville said.

An artist outside of Hesston, Kan., makes the chicken’s wood core, crafted from fallen logs into the shape of an egg using a lathe. The next step takes the core to Linville’s parents farm.

“My dad, Harlan Ebright, does the tremendous labor of love of building the chicken. He welds and pounds and drills—everything to get the chicken standing,” Linville said. “We call him the chicken engineer.”

The chickens then arrive in Kansas City for further assembly, including the muslin fabric form and its feathers. The fabric feathers are stitched by hand.

“My favorite part is the pinning, sculpting and fashioning of the feathers onto the chicken. They have become a blank canvas of fiber art,” she said. “That’s why it is so fun to design—there’s almost nothing we can’t do.”

Each chicken gets its own name. Linville said it is hard to estimate how many hours go into each chicken.

“It’s a lot of hours,” she said. “We always have several going on at one time. It’s a labor of love that goes into it.”

The large chicken stools are priced at $2,400 and up, while the smaller chickens begin at $1,450; pricing is dependent on both the fiber content and intricacy of design.

Linville said her team has sold about 600 stools. In addition to her dad and team of artists, Linville credits both her husband Evan Linville and mother Susan Ebright for The City Girl Farm.

In addition to the chickens, The City Girl Farm also sells journals and shopping bags. Linville and her team have branched out into a new area, too.

“We had the opportunity to make a large fiber wall in the entry way of BNIM’s new office space in Crown Center,” Linville said. “It allowed us to explore knowledge in large-scale work. We are looking forward to more fiber work in commercial or residential settings.”

Will there be more animals for The City Girl Farm barnyard?

“We have been asked about other animals since Day One, and we have been so busy with chickens and satisfied with chickens that I haven’t made the time to do a full design on the next animal,” Linville said. “There are tons of ideas on table.”

For now, Linville is concentrating on her chickens “and connecting more with local artisans and farmers in general to celebrate fiber and traditional craftsmanship in new fresh ways.”

“I love to see where the chickens go and what kinds of stories people share…and they way they come into people’s lives.”