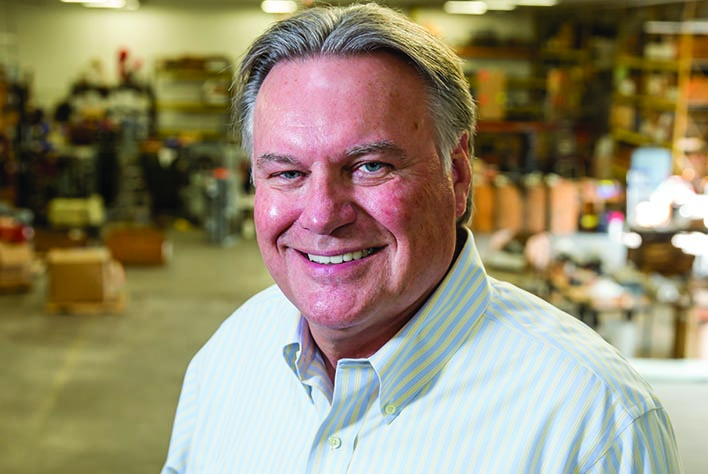 Cleaning Up with Cleaner Air

Without compressed air, many manufacturers wouldn’t be able to function. Blasts of high-pressure air can be used to cool welded materials, spray paint and dust off items as they roll down an assembly line.

Mike Simmons, the founder of Quality Air Solutions in Lenexa, regards compressed air and its industrial applications as nothing less than “the fourth utility” after electricity, natural gas and water.

“All industrial plants need to have compressed air in their systems,” Simmons said. “If you don’t have it, you’re out of business. And it should be the cleanest air that you can put out there. That’s the challenge.”

But the vast majority of Quality Air Solutions’ growing revenues—which have increased at least 10 percent every year—come from sales of its replaceable filtration products that prevent air compressor lines from becoming contaminated.

“We don’t have a major client,” Simmons said. “We have a lot of them.”

“The easiest thing in the world is to start a business,” Simmons said. “The more difficult thing is to start a successful business. But it’s easier to be successful if you really like the products you’re selling. If you like them, you give the commitment to them.”

Simmons’ involvement in the compressed air  industry began in 1981 when he was hired as sales manager for Quality Industrial Products, which sells valves, piping and other items. Within two years, he became a partner in the company, which involved taking a huge financial risk.

“I took a second loan on my house in Overland Park at 14 percent interest because I wanted to have a small business,” he said. “It was just a feeling that I had. It was a desire to realize what I had always wanted and thought could happen. I wanted to be able to make the decisions and, hopefully, there would be more right ones than wrong ones.”

There were more right ones. Quality Industrial Products expanded from Raytown into a new facility in Grandview in 1988, and the company continued to prosper. In 2010, Simmons saw that his partner’s sons were ready to carry on with their father in the family business, while Simmons’ daughters had not expressed an interest.

“I started looking for an exit plan,” he said.

However, Simmons wasn’t contemplating retirement. Instead, he elevated his commitment to the compressed air industry by  using some capital, a veteran salesperson and his two favorite product lines from Quality Industrial Products to create Quality Air Solutions.

‘Do It the Right Way’

Despite launching in the midst of an economic recession, “the beauty of this business was that we weren’t starting from zero,” Simmons said. “There was already business out there.”

The first thing Simmons did was sit down with customers of Quality Industrial Products to explain that he had his former partner’s blessing to continue to help them with the products they were already using. He reaffirmed his professional commitment to these customers and asked for their ongoing business.

“It’s easier to sell to a happy existing customer,” Simmons said, “and get more business from them and get them whatever they need.”

According to Simmons, when paying a visit to a potential client’s turf for the first time, it’s important to begin with the basics.

“You go in and say, ‘Are you having more trouble with oil or water in your compressed air?’ And they reply, ‘Well, we’ve got great compressed air.’  So you say, ‘Man, that’s wonderful. Hey, I have this little system here. Can we go out and test it for you?’

“And then, if they do have great air, we congratulate them and tell them, ‘You certainly do. Could you show me what you’re using to do that with, because I’d like to know?’ You just keep asking. And, finally, you spot another application in there.”

The Quality Air Solutions team is always trying to improve its ability to be of value, Simmons indicated. That includes always being friendly, but not wasting the customer’s time.

“We are selling and developing relationships,” Simmons said. “If we go in and talk to the customer about the Royals and the Chiefs, that’s OK for a few minutes of lead-in. But if we really help him solve a problem, he likes you. And a second call is a lot easier.”

Above all, never sell anything to customers that they don’t really need or “the flame goes out real quick. They won’t respect you or trust you,” Simmons advises.

“If you do it right, then you don’t ever have to be concerned when you go back (on a call). Do it the right way. Do it the honest way. Tell him what will solve his problem. Isn’t it like the Golden Rule? Treat somebody like you want to be treated.”

Simmons acknowledges that downsizing and increased automation at plants in recent years have made it more challenging to schedule sales.

“There are fewer employees, so that means they’re busier,” he said. “And you really have to work to prove that you want to solve a problem for them. I think it’s more difficult now than back in the ’80s or ’90s.”

Still, great opportunities clearly exist for Quality Air Solutions. And none more so than in the food processing sector where developing government regulations are requiring higher standards for industrial use of compressed air. It’s good for business, and it’s good for the consumer, Simmons said.

“There’s a big push right now for sterile air in all the food plants,” he said. Many plants now use an “air knife” to directly cut food and blow air to disperse or arrange food pieces.

So Simmons sells food processing plants a “triple set-up” of compressed air filters—one that first takes out 93 percent of unwanted matter, followed by another that removes 99 percent and finally one that delivers sterile air that is safe to spray on food.

A similar scenario takes place at pet food plants, which use steam to produce their products. Simmons said that a major pet food manufacturer in St. Louis conducted a test that indicated dogs preferred their chow made with a steam filter provided by Quality Air Solutions.

Reflecting on his career, Simmons is glad he chose entrepreneurism. He also owns two other companies that share office and industrial space with Quality Air Solutions.

“I’m one of those guys who has a degree in civil engineering,” Simmons said. “But I never really practiced it. I went into sales right out of college. But I’ve always liked to think about mechanical things—how they work, how they tick, how they’re put together.

“I learned fairly early on I was not a big corporation guy. I just didn’t match up with ‘welcome to the company policy.’ If I look back at it, I would do it the same way. I would go into small business.”