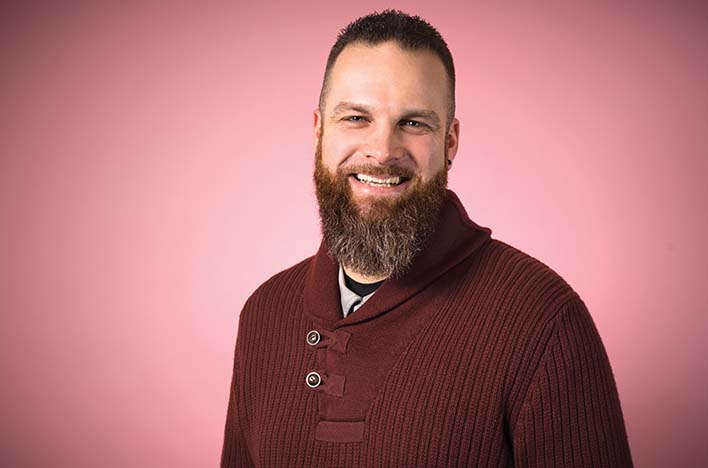 The Face Of Customer Service

There’s little doubt that Travis Thonen has mastered the craftsmanship side of his construction business.

Midwest Comfort Homes LLC has received rave customer reviews since Thonen struck out on his own in 2010. Thonen, who also is an electrician, has become a leader in Kansas City remodeling and restoration work for insurance claims for everything from fire, water, flood and mold damage.

But the entrepreneur knew his weakness. He was working constantly but wasn’t realizing the revenue figures he knew were possible. Thonen didn’t need help with his trade, but he did need a hand with the business.

He took the ScaleUP! Kansas City course, and the results were nothing short of jaw-dropping. The business’s revenue grew by a whopping 333 percent since May 2017, Thonen says.

“It was just insane. Just the largest growth I’ve seen ever,” he says.

ScaleUP! is a free program offered by the Innovation Center at University of Missouri-Kansas City with support from the Ewing Marion Kauffman Foundation. The program includes classes, peer mentoring, professional guidance and more. It’s open to small businesses like Midwest Comfort Homes LLC that operate in a market capable of supporting more than $1 million in annual sales and that want to rapidly grow their business.

It was life-changing for Thonen. But it wasn’t easy.

“He basically told me that I’m barely making it,” Thonen says.

He poured his blood, sweat and tears into the business and was still not getting ahead. At the time, Midwest Comfort Homes had two unique services: restoration services and electrical work.

ScaleUP! experts made it clear: The electrical side of Thonen’s business was sucking every dime from his successful restoration work. The materials and inventory alone were crippling him.

Within months, Thonen reluctantly ceased the electrical side of his business to focus on scaling the restoration side. The results were
immediate. Profits increased virtually overnight.

ScaleUP! experts pointed out that Thonen would have discovered the problem himself if he clearly understood and reviewed his finances. Until recently, Thonen outsourced his books.

“So every quarter, I got this packet in my email that explained how I was doing. It never made any sense to me,” he says.

His wife, who has a background in analytics, has since taken over the role. The two sit down and discuss expenses and revenues every week. On any given week, Thonen knows what was his biggest expense is and why. It allows him to clearly see the big picture.

Many ScaleUP! graduates rave about the program’s lectures. Thonen agrees but says the one-on-one business coaching sessions changed the trajectory of his company.

“I’m just not super book-smart. I’ve always been more hands-on than anything else. The coaching helped me more than just the lecture,” he says.

He’s convinced other construction entrepreneurs would benefit, too.

Thonen got into electrical and construction work to help others. His family suffered a devastating house fire when he was a child. A crooked contractor all but stole their insurance check, too.

That trauma prompted Thonen to build his brand around compassion. He’s working with families who often have suffered devastating blows.

“I couldn’t be any happier than when I read this letter from a 70-year-old customer that had the best experience they’ve ever had with what really is probably the most traumatic experience of their life,” he says. “That’s my drive. I just feel so much better about myself when customers are happy after something like that.”

ScaleUP! experts pointed out that Thonen’s values were the company’s best marketing tool. Instead of spending time in the office and investing hefty sums in advertising, Thonen needed to be the face of the business. He used to send employees to meet customers, but now that’s his role.

It helps his business stand out from a sea of companies looking to make a buck on insurance payouts.

The face-to-face meetings have worked.

“I was overwhelmed by how people responded,” he says.

Gregory McGraw was one of those customers.

McGraw and his husband, Paul Nagorski, were heartbroken when a water leak caused significant damage to their home. The damage included a one-of-a-kind painting that wrapped around their wall and ceiling. It was commissioned when the home was featured years ago in the Kansas City Symphony Designers’ Showhouse.

Thonen’s team tracked down the stealthy leak origin and repaired the stately home’s distinct details, including barrel ceilings, crown molding and more. Thonen selected an artist to repair the ceiling. It turned out even better than the original, McGraw says.

“The people they had working were professional and experts at what they were doing,” McGraw says.

But another aspect stood out. The team faced a tight deadline because McGraw was fighting cancer and needed a healthy living space. The team finished the work, but Thonen continues to check on McGraw’s health. It was something McGraw never expected from a construction company.

“That’s how much he cares about his customers,” McGraw says.

As part of ScaleUP!, Thonen also greatly expanded his market. ScaleUP! coaches urged him to seek out partners. Thonen formed partnerships with mitigation services that help customers with flooded basements and other emergency work. The businesses send him customers daily.

Several other ScaleUP! speakers offered significant advice including how to retain employees in the construction industry, where turnover is steady. It prompted Thonen to start regular staff meetings to share news about the company’s growth. He already offers bonuses to employees but plans to explore more rewards for employees who help the business grow.

He knows that he can continue to grow if he can fill all eight positions in his company.