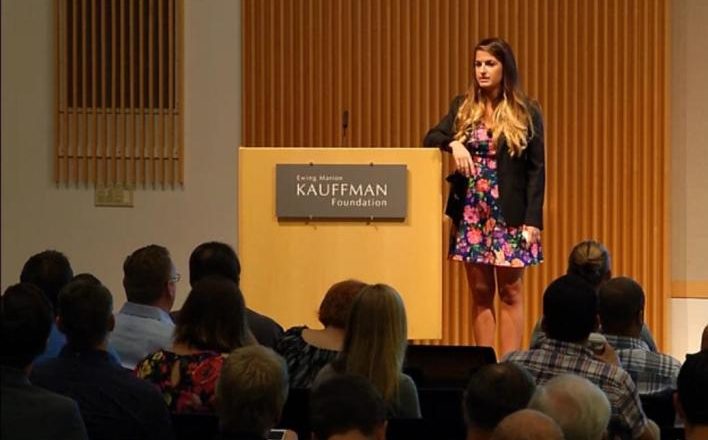 This week’s 1 Million Cups at the Kauffman Foundation featured pitches from MADI Apparel, a women’s underwear startup with a charitable focus, and KanVote, an advance ballot subscription service for Kansas voters.

Hayley Besheer, founder of MADI Apparel (Make a Difference Intimate Apparel), began by pointing out that underwear is the most needed yet least donated item in America. So for every pair of MADI Apparel underwear sold, the company will donate a brand new pair of underwear to a woman in need, typically through shelters that harbor the homeless and victims of domestic violence.

MADI Apparel underwear is made of an organic bamboo blend that is soft, antibacterial, odor resistant and fast-drying, Besheer said, because that “allows the women who receive the donations to wash and hang a pair overnight.”

The business’s second Indiegogo campaign is now underway to help the company afford to manufacture underwear in colors other than black. A variety of styles from “modest” to “thong” will go on sale for $25 to $35 starting Aug. 15 at madiapparel.com.

“We hope to enter retail markets as soon as possible,” Besheer said.

Up next was Sharp Connections founder Stephanie Sharp, a former Kansas state representative, who talked about KanVote, her company’s nonpartisan $10-a-year subscription service for Kansas voters.

KanVote mails completed advance ballot applications for each election to its subscribers, who just sign and drop them postage-paid into the mailbox. The service also offers online candidate surveys from different organizations so that voters can make educated choices.

The KanVote subscription service is primarily trying to reach voters between the ages of 18 and 40, Sharp said, “because hitting that young demographic is important.”

The ultimate goal of the service is to enable folks who don’t have much free time to “never miss a vote,” she said. “The more of us that vote … the better system of democracy we have.”