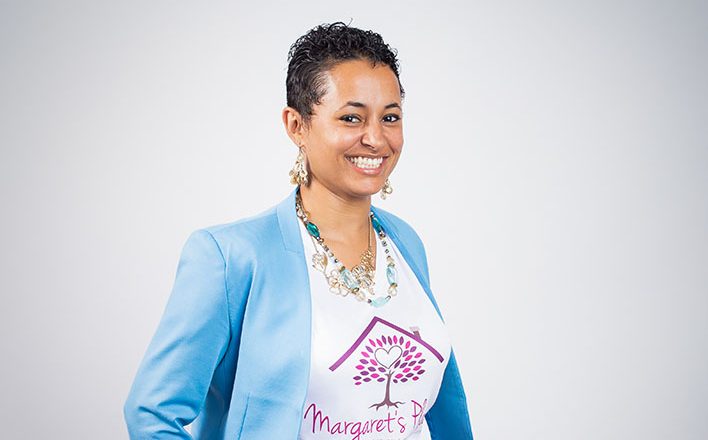 Margaret’s Place: Advisers teach owner to ‘think like a CEO’

When Patricia McCreary opened Margaret’s Place Adult Recreation and Wellness Center in 2016, she knew how to make her facility stand out.

Right down to its name, McCreary wanted to strike a different chord than a typical adult day center. Margaret’s Place offers nutritious, farm-to-table meals. It’s clean and sanitized three times a day. But above all else, it encourages clients to engage by offering fun, fulfilling activities including in the 2,500-square-foot gym.

McCreary learned the hard way with her own grandmother, Margaret, that engaging adult day care facilities – a place for adults with autism, cerebral palsy, memory loss and many other health challenges – were few and far between. Many facilities smelled awful. Several treated the clients like they were infants.

McCreary knew her clients would thrive if they were respected enough to set goals, accomplish reasonable tasks and feel needed. Margaret’s Place has flourished as a result. It was so good that McCreary often didn’t have time to focus on administrative duties.

That’s when McCreary turned to ScaleUP! Kansas City.  ScaleUp! KC is a free program offered by the University of Missouri-Kansas City Innovation Center with support from the Ewing Marion Kauffman Foundation. The program includes classes, peer mentoring, professional guidance and more. It’s open to small businesses like Margaret’s Place that operate in a market capable of supporting more than $1 million in annual sales that want to rapidly grow their business.

ScaleUP! KC showed McCreary that immediate changes were necessary if her business was going to survive. She was doing great at the moment but failing to plan for growth.

“We definitely would have closed our doors if we would have kept going in the direction we were going,” she says.

McCreary is so passionate about helping others that it was hurting the business. She wanted to give clients everything, and that often meant making unsound business decisions. ScaleUP! coaches showed her that she didn’t have to sacrifice client care in order to make financial efficiencies.

It led McCreary to consider more partnerships and outsourcing, including for transportation. McCreary had to rethink her 22-passenger bus. She was immensely proud of the bus that allowed clients to be active and take field trips. But keeping a driver and maintaining the bus was dragging the business down.

“It’s been a nightmare,” she says.  ScaleUP! coaches asked her: What’s best for the business?

“They changed my thought process. ScaleUP! has made me sit back and take my emotions out of my thoughts and really make decisions about what’s best for the business and not what I think personally or how I feel personally.”

ScaleUP! experts also urged her to trust the staff she hired and stop trying to fill every role.

“I have learned to think like a CEO,” she says. The ScaleUP! coaches also asked McCreary to create standard operating procedures that would put all of the policies in her head on paper. It would allow the business to grow without McCreary overseeing an employee’s every move.

When it came time to work on operating procedures, McCreary stepped back and let staff help. Her director, Shereese Hameed-Muhammad, finished a large portion of the work in an eight-hour day.

As it turns out, Hameed-Muhammad was in charge of creating similar procedures at a bank before joining Margaret’s Place. McCreary hadn’t tapped that potential until ScaleUP! pushed her.

“It’s definitely been amazing to get those tips and pointers in class and going back and give it to the team and watch the magic happen. It’s also changed the team camaraderie,” McCreary says.

Delegating has led to other benefits too. It’s helped employees become more invested in the long-term strategy and goals. That positive energy has trickled into every aspect of the business, including client care, McCreary says.

It’s freed up her schedule to plan and promote the business.

FOCUS ON THE FUTURE

McCreary says ScaleUP! has changed every aspect of her business, especially her long-term plans.

She is thinking about the competitive advantages she has and can build on to accomplish her dream to scale.

For starters, the center has a partnership with a wellness program called Peace for Your Pieces, which is operated by her director, Hameed-Muhammad. It brings specialists including a nutritionist and occupational and speech therapists to the facility. It means residents can work on their overall health while at the facility instead of sitting idle.

ScaleUP! enabled her to create a three-year plan to build a second and third facility. McCreary will hire more staff in the first quarter of 2019 so her existing staff can work on growth. McCreary also is developing a franchise plan and considering a fourth facility under a franchised model.

“It’s given her more of a mindset to reach the goals that she had in her heart,” says Hameed-Muhammad. “They’ve given her step-by-step classes where she can look at other well-known businesses and see what their best practices are.”