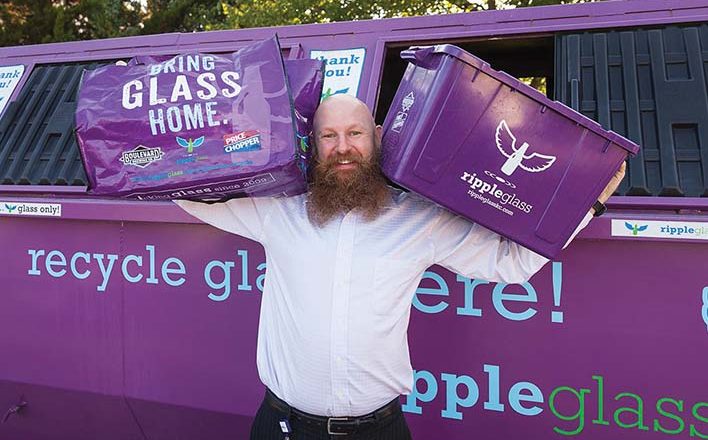 If you use food and beverage products that come in glass, “Ben” hopes you will help feed the big purple bins throughout the Kansas City area.

“Ben” is the purple winged bottle mascot of Ripple Glass, the area’s recycler of glass products with purple containers across the metro and beyond. In 2017, the company celebrated recycling its 1 billionth bottle, and next year, Ripple will mark its 10th anniversary.

“Our mission is to keep glass out of landfills and make recycling work,” said Michelle Goth, the company’s Kansas City general manager. “That means we need to be both the recycler and help create the systems that allow people to get glass to us.”

Ripple Glass was created out of a need for a local glass recycler. In 2009, Boulevard Brewing Co. was committed to moving toward zero waste—including its glass beer bottles. With the backing of local companies and community organizations, Boulevard created Ripple Glass as the solution. With the sale of Boulevard Brewing, Ripple was sold to a group of owners.

With its facilities at 1642 Crystal Ave. in Kansas City, Mo., Ripple is the so-called middleman in the recycling loop.

“You cannot take used glass and use it to make new products without intervention,” Goth said. “Our primary function is to be the processor for that glass.”

Ripple has more than 100 recycling containers throughout the metro and serves other communities in a nine-state area; everything collected is transported to Kansas City for processing. In addition to food and beverage containers, Ripple accepts candle jars, cosmetic bottles and jars, windows, shower doors and table tops.

Once the glass is picked up, it goes to Ripple’s processing facility for a multistep process.

“It goes through decontamination for the removal of all large nonglass materials, an initial crush to reduce whole containers into smaller pieces, then drying, optical sorting to remove small contaminants and separate colors,” Goth said.

The end of the process includes grinding and screening to match customers’ specifications. The finished material—a furnace-ready cullet—waits in silos to be loaded into trucks for transportation to its customers.

Ripple only has two customers for its glass cullet: Owens Corning here in the metro purchases it to make fiberglass insulation, and Oklahoma-based Ardagh turns it into new glass bottles, which it supplies to Boulevard Brewing, among others.

Only 20 percent of Kansas Citians currently recycle glass; Ripple would like to see that number climb.

“The biggest competition is the trash can … and all the glass that is going into landfills,” Goth said. “We are trying to make it more convenient.”

“They’ve helped bring visibility to the program,” she said. “They act as their own billboard or marketing tool.”

One fun effort the company has undertaken is using its large purple recycling containers as “canvas” for murals around the city. The first bin in the series features Boulevard Brewing and was created by Boulevard designer Frank Norton. It features a cartoon version of John McDonald, Boulevard founder and a partner in Ripple Glass. The mural bins will travel to various locations around the city.

Ripple has expanded its efforts recently by starting a recycling program for area bar districts.

“We are servicing just parts of the metro area now, but we hope to be metrowide next year,” Goth said.

Ripple also is expanding its reach beyond the 95 communities it already serves outside of the metro Kansas City area. Recently, Goth was instrumental in signing up the first community in Oklahoma.

The staff has experienced steady growth, hiring 10 people in the last year alone. Now with 25 employees, Goth said the team has been critical to Ripple’s success.

“We hire people who are passionate about Kansas City and think what we do is fun,” Goth said. “I think it’s important when you are pushing the rock uphill to increase recycling participation that we have people who have passion for doing things that benefit Kansas City.”

36,000 // Tons of glass saved from landfills by Ripple Glass this year

200 // Area businesses that recycle their glass with Ripple