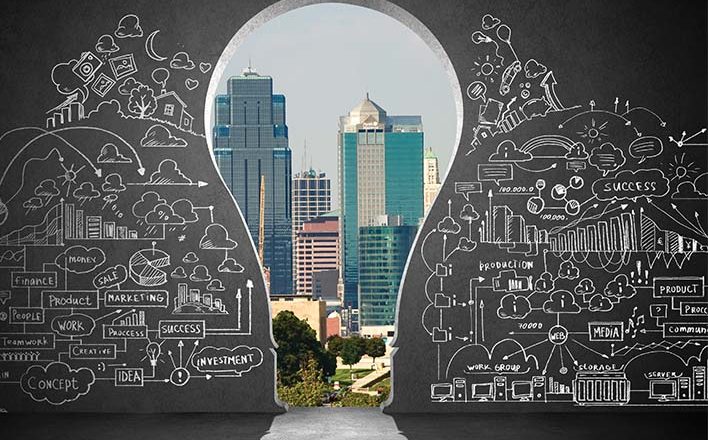 The funding environment is looking up for KC companies—but there’s still work to do.

The funding environment for new businesses seeking investors has never been better in Kansas City. An estimated $752 million in capital is available, almost quadruple the amount a few years ago.

“If entrepreneurs tell you there isn’t any money in town, they’re wrong,” said Kelly Sievers, managing director of Women’s Capital Connection. “If there are good deals out there, they’ll get funded.”

The $752 million in available capital is the result of multiple equity capital players either entering the market or expanding, said Kate Hodel of KCSourceLink, which reported the estimate in its annual “We Create KC” report, which tracks the impact of entrepreneurship on the local economy.

“We have been able to identify a significant amount of capital that’s available,” Hodel said, “but entrepreneurs have to be ready for it.”

‘The Environment Is Very Much Improved’

Pepper IoT, a Kansas City-based startup that helps firms take advantage of the “Internet of Things,” recently completed an
$8.5 million round of funding.

“The environment is very much improved in terms of access to capital,” said Scott Ford, CEO of Pepper IoT. “There are more sources, as well as an environmental change related to the level of investor sophistication and comfort in investing in early-stage, high-risk ventures.”

Ford has seen all sides of the investment world, having run the venture capital operation at Sprint from 2005 to 2008 and then co-founding OpenAir Equity Partners, an early-stage venture fund.

“We’re not Silicon Valley,” Ford said, “but we’re much better than it’s ever been since I arrived in the community.”

Liliana Younger is the co-founder of Mobility Designed, which manufactures a new, more ergonomically comfortable version of crutches. She said her company has received more than $900,000 in funding since 2015.

“Initially, we did a seed round with angel investors who were in our friends and family circle,” she said.

“Later, we brought in more funding from angels outside our immediate circles, and then we went on to pitch angel investment groups.”

“In our experience, there is a big appetite from the investment community in Kansas City to put their dollars to work,” she said. “They are open to hearing companies with new and promising businesses.”

Maria Meyers, executive director of the University of Missouri-Kansas City Innovation Center and founder of KCSourceLink, said her organization has striven to help startups and early-stage firms find the assistance they need to pitch successfully to investors.

Hodel said KCSourceLink is still seeing a gap in the funding network for entrepreneurs whose companies have gotten past the seed-funding stage and are looking to grow to the next level.

These companies are seeking “mid-range” investments of $100,000 to $1 million. The lack of investment at this level isn’t unique
to Kansas City.

“It’s a common gap,” Hodel said. “When you think about the continuum of funding, the early stage is where the most risk is, and it lessens as companies establish themselves in the market and get customers.

“If you look at the under $100,000, there are programs that have been helpful and filled the pipeline. On the other end [above $1 million], there are a number of venture capital firms willing to invest because they see the upside.”

Still, her network—which is geared toward funding startups with women in senior management roles—has been more active than at any time since its founding in 2008.

“Women’s Capital Connection has done more investing, with more dollars and more companies, in the last two and a half years than in the whole first seven years of the network,” Sievers said.

About $1.7 million has been invested the past couple years, she said. Among the companies that WCC has funded are Rawxies, Elias Animal Health and Hilary’s Eat Well. Each has received more than one round of funding. WCC currently has 17 women-led firms in its portfolio.

“I think the current situation in Kansas City is really exciting,” Sievers said. “There’s a lot more money at work.”

A Need for Training and Support

But Sievers noted that many entrepreneurs seeking funding need to be coached about the process.

“What most people don’t realize is the one-on-one work we do with the company wanting equity funding,” Sievers said. “On average, I will have two to three separate meetings with the entrepreneur to analyze the deal structure, coach on their pitch deck, and go over other aspects to get them ready for the investor presentation.”

There is also a need for potential investors to be educated to evaluate new firms and the risks involved, said Mark Meyerdirk, one of the founders of the Alternative Investment Forum.

“In the spring of 2016, we did a survey with KCSourceLink to find out why some investors were reluctant to invest in early-stage entrepreneurial deals,” Meyerdirk said.

“One of the major findings was that new investors don’t know how to properly investigate deals.”

A task force led by Meyerdirk followed up on that initial survey. It asked 96 professional investment firms within a 200-mile radius of Kansas City about how they evaluated startups. Forty-three percent responded.

The survey found there were clear similarities in how the firms conducted their due diligence and the types of data they collected. Based on that data, the Alternative Investment Forum and KCSourceLink plan to create a “Venture-Stage Due Diligence Report Template.”

“There is a lot of interest from investors to learn what’s going on,” he said. “There’s a groundswell of high-net-worth individuals looking at early-stage companies and a number of venture companies being organized.”

One of the initiatives intended to educate investors is the KCInvestED program. It connects investors with the resources, events and tools to learn more about investing in early-stage companies.

“We found a lot of mismatches out there,” said KCSourceLink’s Hodel. “There are investors saying there are no good deals and entrepreneurs saying there’s no good funding.

“We need to continue connecting investors and helping entrepreneurs build companies that are attractive to investors. That’s the key piece.”

WCC’s Sievers said that the investors in her group receive ongoing education on different topics, including performing due diligence on companies they are considering investing in.

“Our Angel Capital Series with the Enterprise Center of Johnson County focuses on an introduction to investing from both the entrepreneurs’ viewpoint and potential investors’. We have pitch clinics as well at ECJC,” she said.

“The call is a great opportunity for us to syndicate deals throughout the region,” she said.

A new player in the local venture capital field is the KCRise Fund. It was among the investors in the latest round of funding for Pepper IoT along with Leawood Ventures and Royal Street Ventures.

“We’ve seen a dramatic growth in available capital and organized capital,” said Darcy Howe, manager of KCRise Fund. “Capital is less a challenge than it was a few years ago.”

She credited KCSourceLink with helping better organize the world of investors and entrepreneurs.

“Prior to now, there were capital sources, primarily families of wealth funding companies and entrepreneurs themselves, but everybody was doing it in a quiet way.

“If you were an entrepreneur, you didn’t know where to go or whether an investor might be interested in the kind of business you were starting. It started with KCSourceLink identifying the problem.”

Howe says her firm specializes in sidecar investing. “We only invest if an ‘approved VC’ invests in that round,” she said. “The process is more that the entrepreneur attracts a VC—sometimes we make the intro and sometimes they bring the VC to us for approval—then we invest alongside the VC with the same terms.”

Among the Kansas City-based ventures being funded by the KCRise Fund and Royal Street are Backlot Cars, a new online car auction site. KCRise also is partnering with Leawood Ventures in funding SquareOffs, a new social media engagement platform.

“There’s always been some syndication in Kansas City, but not really the amount you see now,” Howe said.

KCRise Fund has made investments in 10 companies over the past nine months, many of them in partnership with out-of-town firms.

“The point is, we’ve got a multiplier effect,” she said. “There’s not only more funds in Kansas City, but more funds coming from outside Kansas City helping Kansas City companies.”

All this new startup activity is being tracked by the Kauffman Foundation. In its most recent Kauffman Index report, the Kansas City metropolitan area’s ranking for startup activity increased from 19th among the nation’s 40 largest metros last year to 15th.

The foundation reported that 370 out of every 100,000 adults in the Kansas City metro became entrepreneurs during any given month.

“There’s a lot more equity options based in Kansas City than a year and a half ago,” said Nathan Kurtz, senior program officer for entrepreneurship at the Kauffman Foundation.

Kurtz said the increased number of entrepreneurs in Kansas City is not just due to more available funding. He also attributed the growth to the Google Fiber network here, and to educational and networking programs like KCSourceLink and the Kauffman Foundation’s 1 Million Cups program.

“There are a lot of programs that have been around and are being used more now,” he said.

The Kansas City Startup Foundation has been connecting and nurturing the burgeoning entrepreneurial scene in Kansas City since the arrival of Google Fiber in 2012.

Adam Arredondo, the current foundation president, said there’s been a noticeable improvement in the equity environment.

“The biggest opportunity is there’s still a lot of wealth on the sidelines—families and successful businesspeople—and a lot of education is needed,” he said.

“It’s clearly trending up, though, and we’re getting national recognition. The entrepreneurial community has been more collaborative, and that’s building a more vibrant environment for entrepreneurs.”

Ford said that as the Kansas City funding environment improves, investors should embrace the need to be more tolerant of risk, an insight Silicon Valley learned years ago.

“Failure in other investment hubs is often considered a badge of honor,” he observed. “We need to change the perception of failure so it’s seen as being part of the experience versus being a negative.”