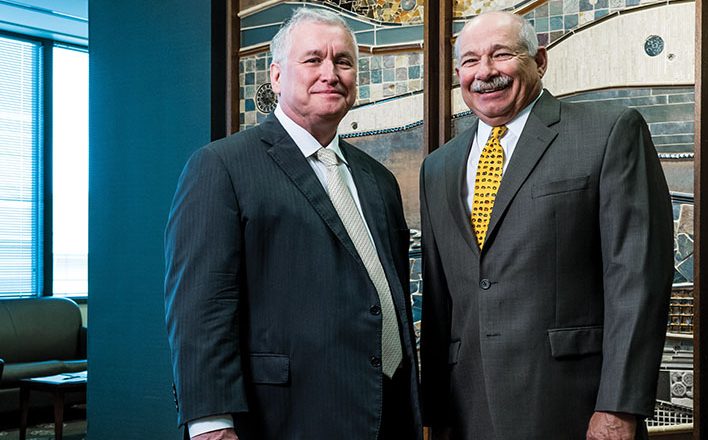 Lawyers spend their careers helping clients grow businesses and navigate hurdles along the way. Some firms are so focused on clients that they don’t always stop to strategize their own business future.

That’s why it caught some by surprise this fall when two heavy hitters — Rouse Frets Gentile Rhodes LLC and White Goss PC — decided to stop competing against one another. They joined forces instead to expand their local, state and national reach.

The result — Rouse Frets White Goss Gentile Rhodes PC — sent a strong message to clients about its team of professionals. It unites 65 lawyers, including some of the most well-known and experienced lawyers in the Midwest and country. It puts the firm among the top 10 largest in Kansas City and makes it one of the largest in Kansas.

“We’re surrounded with some really good talent,” says Harold Goss. “It makes life fun and easy when you’re in a law firm of talented lawyers.”

‘A chance to build something’

Goss and Chuck Rouse are the new firm’s managing officers. The two said that while this growth is reason to celebrate, it won’t change the small-firm feel and atmosphere that they’ve worked hard to create. Clients can still directly call their lawyers, and rates will remain competitive.

The firm will retain its three offices, one in Leawood and the Kansas City offices downtown and at Country Club Plaza.

The managing partners agree that change is a vital component to evolving with clients and offering the best service. Change isn’t the enemy.

“We both had the mindset of knowing how to do change. And change reinvigorates lawyers,” Rouse says of the firms. “There’s a chance to build something again.”

Lawyers want to be part of building and creating something new. Building something has its own energizing, entrepreneurial spirit, Rouse says.

Although this marks a new era, the firms are used to steady and controlled growth.

Rouse Frets Gentile Rhodes started in 1995 with five attorneys. It grew to 45 members and was ranked by U.S. News as among the best law firms.

White Goss was founded in 2000 when five established attorneys made headlines by leaving Polsinelli. Goss and Michael T. White, former Jackson County executive, were among the first lawyers hired at Polsinelli. White Goss was ranked by Chambers USA as among the top firms in its practice areas.

The latest move positions them to leverage their strengths and better serve clients, Goss says.

Unlike many business mergers, the firms didn’t unite and start cutting employees. It was exactly the opposite. They knew that each firm complimented the other.

The firms each had a long resumé of large economic development projects, including by providing legal counsel regarding the Kansas City airport while serving on the team for Edgemoor.

“We think there are some business synergies,” Rouse says.

The merger makes their real estate development team even stronger. White Goss had a strong economic development team. Led by White, they targeted the Missouri side of Kansas City.

“But clients sometimes want a Kansas lawyer and sometimes want a Missouri lawyer, and you need to be able to cross that state line without a problem,” Goss says. “Without a major office on each side of the state line, that’s hard.”

Their clients deserved a firm that was strong in both states.

“To really grow that development in Kansas, you need a Kansas base,” Goss says. “Greg Musil could compete with Mike White, or we could join forces.”

They have a team of attorneys with eyes and ears in local and state government — be it Topeka or Jefferson City — to understand how policy changes play out practically for clients.

“That gives us a really good ability to serve a client who is coming to the city,” Rouse says. “They may even be in the process of deciding where to go. Which side of the border do they want to be on?”

The new firm also stands out, Rouse says, because it offers highly skilled lawyers at reasonable rates that are below their competitors. In addition, lawyers are given more flexibility than large firms, with hundreds of lawyers, can offer.

“We want to empower lawyers to deal with their clients. That includes negotiating a rate. As opposed to management saying, ‘This shall be the rule,’” Rouse says.

The firm believes part of their success is the ability to grow methodically by hiring the right people or acquiring firms with well-trained, experience lawyers.

That means hiring the right professionals is critical.

“We want entrepreneurial lawyers with a high skill set that fit with our culture,” Goss says.

Then management can take a step back let them do their work, Rouse says. If someone doesn’t work out as expected, the key is to identify it early, he says.

“If it doesn’t work, you go in happy and you part happy,” Rouse says.

Many of the firm’s lawyers have left large firms to join them because they want more freedom, Rouse says. Some want to get away from large firms that sometimes dictate one-size-fits-all policies.

The firm is on the short list of places lawyers call when they want to leave the city’s biggest firms.

“We went from 5 to 65 for a reason,” Rouse says. “Part of that is giving good-quality lawyers the freedom to exercise their skill set.”

It means Goss and Rouse set aside their egos and let lawyers handle their niche. They are there for guidance but not to force a plan on anyone.

“So it creates that diversity and we empower them,” Rouse says. “That’s why lawyers like it here.”

That philosophy immediately stood out to Sarah Stork Meyer when she and her partner also merged their boutique firm with Rouse Frets Gentile Rhodes in September.

The partners don’t micromanage her work, she says, but they are there for advice.

“If you ever need the support of anyone here, you have it,” she says. “We have a good breadth of the business world covered here.”

It was ideal for Meyer, who co-founded StartMeUp KC with Analisa Cox. The legal firm specialized in guiding small businesses, including startups. The firm provided a flat fee, which was a big factor for small businesses. It allowed the lawyers to talk often with clients and get to know them and the business better. That’s a more difficult relationship to form at a big firm because the hourly rates prove too intimidating for small business owners. Small talk could be considered wasted money in that case.

“We were able to do it in a way where we were still able to make money, but we didn’t have to keep track of our hours,” Meyer says.

None of that has changed since the merger, she says. Instead, the firm’s take was: “You know what you’re doing. You got this. Go get it done,” she says.

The trust, she believes, inspires a friendly spirit that stands in stark contrast to the intense culture in other legal communities.

Staying true to their roots

One of the biggest challenges to overcome before the merger was determining whether the firms had the same culture. That, the managing partners believe, was the lynchpin.

If one firm offered lawyers flexibility to make big decisions without administrative oversight, the other firm had better agree.

Also, since the merger didn’t mean a major shakeup in personnel, it also meant that the business and financial administration had to be in sync, too. Ultimately, it proved to be an easy decision.

“It was kind of easy to check the box on those,” Rouse says.

They still worked hard to implement the change. They held meetings to answer questions with staff.

The work was easier with lawyers, many of whom had worked with or knew one another, given the small but mighty legal community in Kansas City.

The potential for unease and tension was higher for administrative staff, the managing partners said. They didn’t know many of their new co-workers, let alone their operating style. The partners worked to ease potential worry by visiting one-on-one with employees, answering questions and addressing concerns during several meetings.

Creating the new firm meant nearly all administrative staff had a slightly different job. No one was assigned to a new building.

However, Rouse and Goss did switch offices to get to know staff better.

The process has flowed smoothly, they say.

The next big challenge will be managing long-term growth and staying true to their roots. Growing too big changes the feel of a firm that gives clients more access and lawyers more flexibility.

Rouse points out that they need time to digest the merger and discuss what’s next. They won’t grow simply to become big. But they will work to fill holes in their offerings in order to better serve growing clients.

“We want to stay vibrant,” Rouse says. “We don’t want to stand still.”

“We want entrepreneurial lawyers with a high skill set that fit with our culture.” — Harold Goss