A Bear, a Hare … and an Alarm Clock

How to use storytelling to connect with your audience.

Alarm clocks were once found on nearly every nightstand — a reliable, necessary evil to get us up and at ’em at just the right time each day. (At least those who didn’t slam the snooze button one too many times.)

But in the modern world of ubiquitous cell phones with built-in alarms, bedside clocks have become increasingly optional, and perhaps quaint, in some quarters.

So how does a retailer still find a market for the old-school alarm clock?

The power of a story

In 2013, British department store giant John Lewis decided to go against the grain and feature — of all things — a twin-bell alarm clock in its broadcast advertising leading up to the Christmas shopping season.

The cartoon-style ad featured a bear and a hare who were buddies; such close friends, in fact, that the big bear carried the little hare on his back as they traveled through the forest in the summer and fall seasons.

As winter arrived, however, the bear grew tired. The friends were sad to part ways, but it was time for the bear to go into his cave and begin his hibernation.

Sadly, because of his annual cold-weather slumber, the bear had never experienced the magic of Christmas.

The hare decided to do something about that. So he took a small packaged gift to the cave and placed it next to the sleeping bear.

Cut to the next morning, and the hare is seen with the deer, foxes, and other animals gathered for the celebration of the holiday.

The hare turns around to find his friend the bear not only awake, but standing upright on two legs peering over the ridge, smiling in delight at his first sight of a glowing, snowy Christmas tree in the forest.

The viewer is then taken back to the empty cave for a quick glimpse of a traditional alarm clock, now exposed after rattling off its gift wrapping, having done its job of waking the bear at just the right moment.

The ad, which has music but no dialogue, ends with the words “Give someone a Christmas they’ll never forget” on screen next to the decorated tree. All creatures are happy and content.

Ahhh. What a sweet story.

But did it make the ad effective? You decide.

Getting those people into the store paid dividends overall as well, with the retail chain enjoying its earliest £100 million Christmas season sales week in store history.

Could an ad outlining the boring but necessary features and functionality of the trusty, old alarm clock, minus the creative story, have achieved similar results?

A story changes everything

A story can appeal to nostalgia. It can conjure emotions. It can introduce people to ideas they never even stopped to consider before.

While facts and figures can be hard to remember or even deliberately memorize, many people find stories easy to recall and share.

They might not be able to tell their friends what color the alarm clock was, or if it ran on batteries or electricity, but they can tell their friends it was the John Lewis clock from the hare that woke up the bear for his very first Christmas. (And maybe that gets people thinking about something they use daily but rarely really “see”: “Gosh, I’ve had my alarm clock for 10 or 15 years. Maybe it’s time for a fun new one.”)

Stepping toward your story

To tap into the power of stories for your brand, it’s important not to neglect a few simple steps necessary for the development of any effective marketing strategy.

First, know your audience. Don’t just say “everyone.” Think about who you realistically want to target as likely buyers.

Second, know your message. What makes your product or service desirable and/or better than others? How do you communicate that in a language your target audience will best understand?

Third, know your medium. Where does your target audience live, not just physically, but mentally? Are they mostly online or still watching TV? If TV, on cable or only streaming? Do they listen to the radio and, if so, analog or on mobile devices?

Finally, know your desired result. Who do you want taking what action as a result of your story?

Crafting your story for big impact

Once you’ve done this work, you can get busy thinking about the appropriate story to maximize the impact of your messaging.

And your story should get to the point quickly. Consumers can be very impatient.

Create a clear beginning, middle, and end with your story — an arc that introduces an idea, keeps people gliding through, and ends with a desired feeling.

So, remember, what evokes emotion in you may be different than what will get your target audience moving. When it comes to marketing, keep your focus on them and their perspective, not yours.

In the coming months, we’ll return to the topic of storytelling and how to best convey your businesses’ stories.

After all, who knew bears needed alarm clocks?

Brad Burrow is the founder of Real Media in Overland Park, Kansas 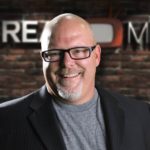 Brad Burrow is the Founder/CEO of Real Media, a Kansas City media and content company that helps companies develop and build strategies and content on various platforms – local and national.